The Chinese New Year started February 8 for 2016 with the Year of the Monkey.

Went looking for an appropriate story and was surprised to find Lafcadio Hearn wrote one complete with not only a monkey, but dragons, and a pourquois tale of how the jellyfish became the way it is.  Went looking for it and the Internet Archive had the story as written in English by Basil Hall Chamberlain in Kobunsha's Japanese fairy tale series -- no. 13.  If you go to Google Books, however, you will see the exact same text in Hearn's Japanese Fairy Tales, pp. 36-41. Who wrote it?  My bet is on Hearn.

Leave it to a tricky monkey to fool everyone.  This is essentially the story told in India as The Monkey's Heart where a monkey fools a crocodile.


The classic Index to Fairy Tales by Mary Huse Eastman puts the story in many Public Domain volumes by many authors of the late 19th and early 20th century starting with Hearn, but does not mention Chamberlain.  I've many of them, but they and the Google book by Hearn miss the lovely illustrations found on the Internet Archive edition attributed to Chamberlain, which is also Public Domain, so it would be as silly as a jelly-fish to omit them.  The MARC record doesn't tell who did the illustrations, possibly Chamberlain?  It only says they are hand-colored and "Printed on one side of double leaves of crepe paper, folded in the traditional Japanese style."  It does claim "told in English by B. H. Chamberlain." To make the illustrations look right, I tried to put two side by side, but the software for this blog isn't permitting it even when I keep them smaller.  At least this makes the text and illustrations more legible since I can reproduce them larger for you. 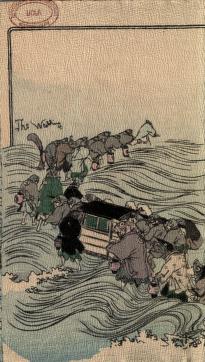 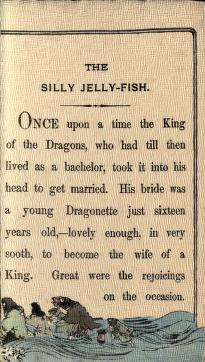 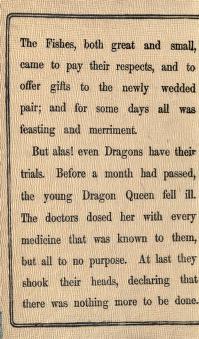 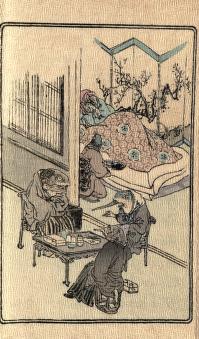 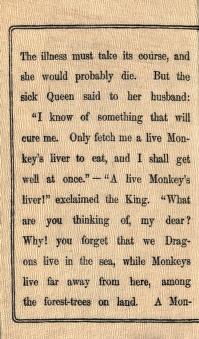 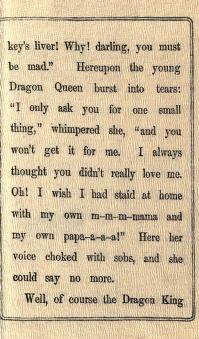 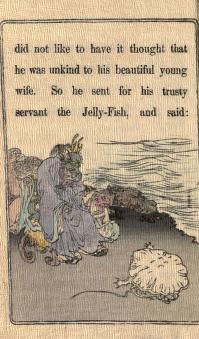 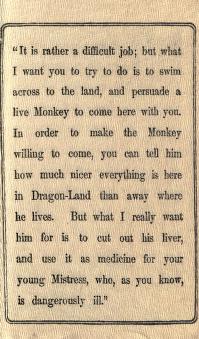 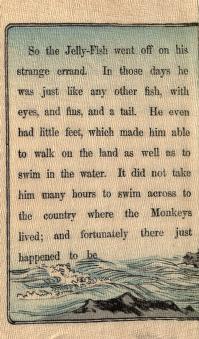 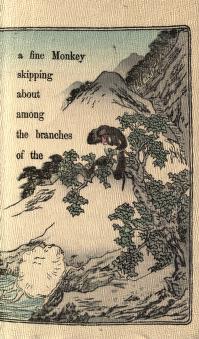 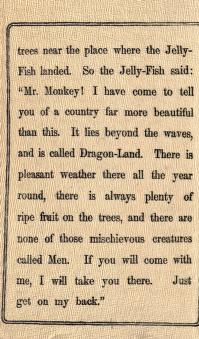 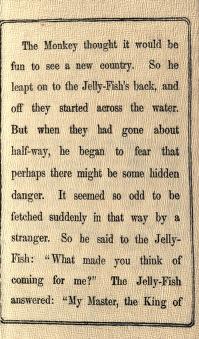 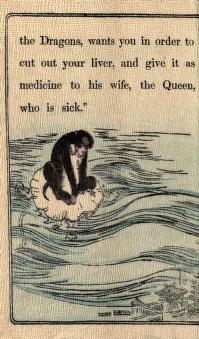 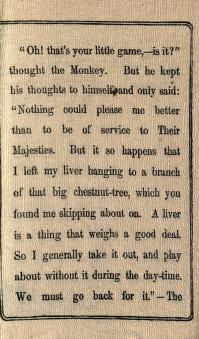 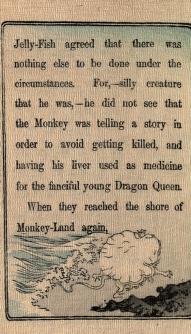 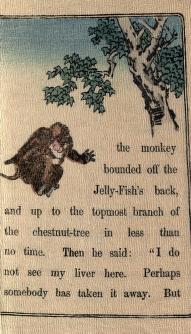 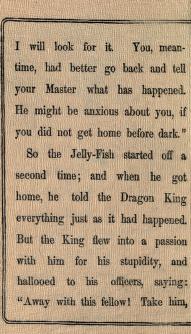 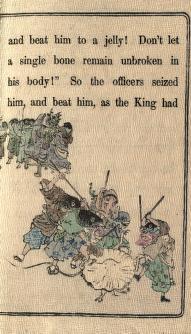 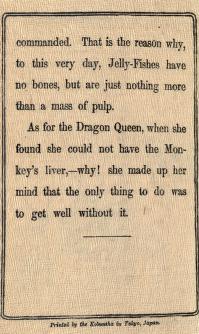 So Monkey had his fun with the jelly-fish and us, keeping us guessing if Lafcadio Hearn did indeed write "The Silly Jelly-Fish" or Chamberlain.  The story was quite popular so you may enjoy tracking down more than one version.  Here are some other Public Domain versions of the tale: Griffis - "Jellyfish Takes a Journey" in Green Willow; Lang - "The Monkey and the Jelly-Fish" in both his Violet Fairy Book and another less common book called Twelve Huntsmen and Other Stories; Ozaki - "Jelly Fish and the Monkey" in Japanese Fairy Book; Singleton - "Silly Jelly Fish" in Wild Flower Fairy Book; Wiggin and Smith - "Silly Jelly Fish" in Tales of Laughter.  To find the Indian versions about the crocodile, there are fewer, but my favorite is Babbitt's "Monkey and the Crocodile" in Jataka Tales.

Here are a few illustrations from some of those versions:  the first three are in Yei Theodora Ozaki's Japanese Fairy Book and fit the story above 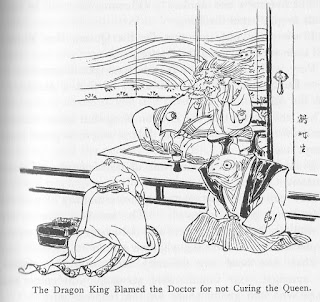 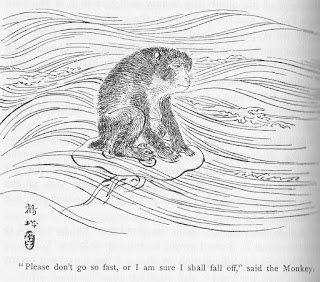 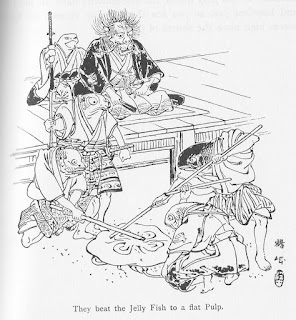 the last is from Andrew Lang's Violet Fairy Book and is by H.J.Ford -- notice the story is clearly very different, for example there are no dragons, so you might want to compare his "The Monkey and the Jelly-Fish." 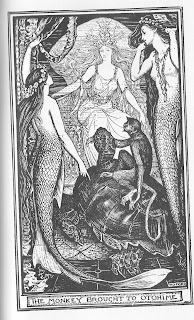 So Happy New Year, either the Chinese Year of the Monkey or 2016.
******************
This is part of a series of postings of stories under the category, "Keeping the Public in Public Domain."  The idea behind Public Domain was to preserve our cultural heritage after the authors and their immediate heirs were compensated.  I feel strongly current copyright law delays this intent on works of the 20th century.  My own library of folklore includes so many books within the Public Domain I decided to share stories from them.  I hope you enjoy discovering new stories.