The Native American flute has a haunting sound and I love to play it in the traditional  improvisational style.  It makes a great beginning and ending to Native American tales; playing it without pre-planned notes runs counter to my years of music training dependent on notation; and additionally playing a wind instrument is good for breath control, especially good for working against the cold and flu season.  Last week's Pawnee legend about corn and information about George Bird Grinnell made me think about how I value it, both for storytelling and beyond and also why storytellers should know more.  Of course I have a story to share, but first I want to mention other stories about this flute. 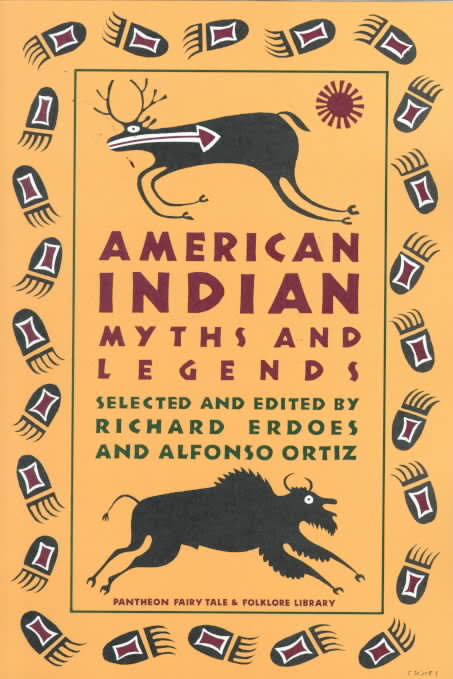 where the Richard Erdoes attributes it to a 1967 New York City recording of its telling by Henry Crow Dog.  The link I gave doesn't mention that source, but it is the same story word for word and ties the flute firmly to courting.

Most legends about the flute come from the Plains folklore and Flutopedia's legends page
gives a variety of tales and references if you want to fall down the rabbit hole and do your own prowling about the flute.  Does that mean only the people of the Plains can claim it? 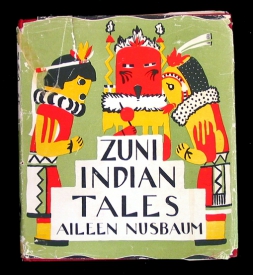 Dunberidiculous!  Travel south to New Mexico to the Pueblo peoples known as the Zuni and you can find a story about "The Four Flutes" in a book just new enough, 1926, that unfortunately it's not in Public Domain to print here.  In the story the Zuni sent four elders to Paiyatuma, the God of Dew, seeking new music and new dances.  The elders respectfully brought gifts to the Cave of the Rainbow and in return received a performance of the flute and a flute for each of them to carry back to the people.  Of course that is a "Readers Digest Condensed" version of the story from Aileen Nusbaum, who learned it because her "small son, Deric, was adopted by the Zunis, and as he sat as the feet of the elders of the tribe and listened to tales, she was able to record them."  That in itself is a bit of a story.

Still that's out west, so I was delighted to find Glooskap giving the flute in the Micmac tale of "How Glooskap, leaving the World, all the Animals mourned for him, and how ere he departed, he gave Gifts to men."  It's a very minor part of the story with three men who heard he was giving gifts to anybody coming to him.  The eldest "who was an honest, simple man, and of but little account among his people, because he was a bad hunter, asked that he might excel in the killing and catching of game.  Then the Master gave him a flute, or the magic pipe, which pleases every ear, and has the power of persuading every animal to follow him who plays it.  And he thanked the lord, and left."  There are many editions of this book from 1884 which carries the subtitle of "or Myths and Folk Lore of the Micmac, Passamaquoddy, and Penobscot Tribes."  Charles G. Leland was one of the many 19th century amateur folklorists and he's faulted for taking liberties with his texts in an attempt to prove the Norse connection to the Native American.  It's a shame he diminished the value of his work because 21st (and even the 20th?) century scholarship has been able to provide the link he sought.  Personally I simply was seeking evidence of the flute among the Woodlands people of the Great Lakes and New England.

You've either been patient following these meanderings or have skimmed down to today's story.  Let's go back out west to Lake Miwok and the Miwok people in California for a dangerous story about the flute.  Why dangerous?  Because it's a lullaby and it's always dangerous to perform that if you want your listeners to hear the entire story.  My 1910 book deserves caution, too, so where it's a bit blurry it's not you getting sleepy.  I'll insert in the few places where things seem a bit too blurry to guess what is said. 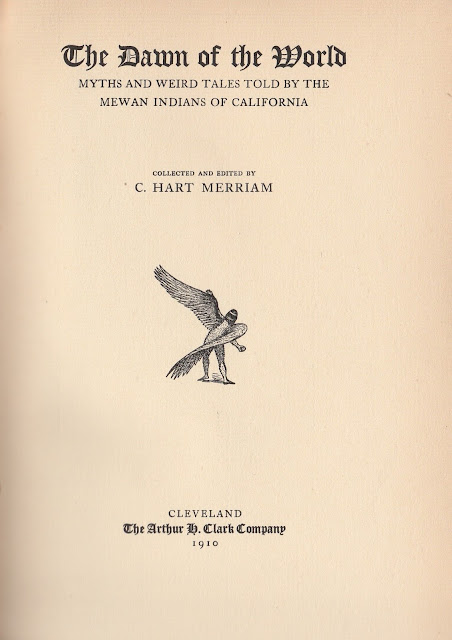 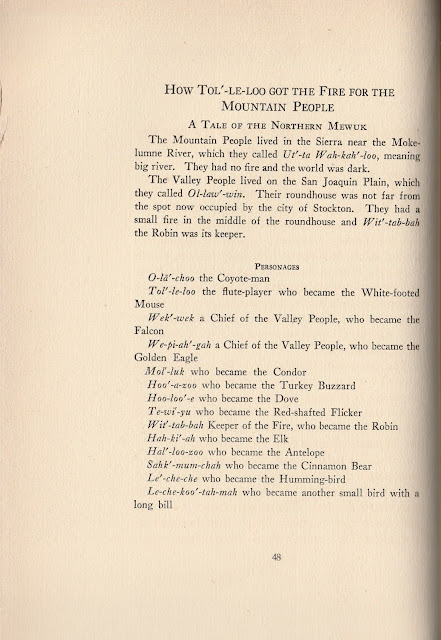 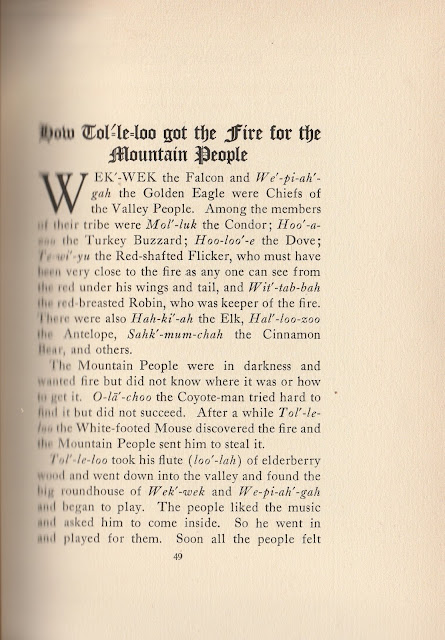 The blurring is fairly easily figured out except for the names of Hoo'-a-zoo the Turkey Buzzard and Te-wi'-yu the Red-shafted Flicker, Sahk'-mum-chah the Cinnamon Bear and the first time our hero, Tol'-le-loo, the White-footed Mouse is mentioned. 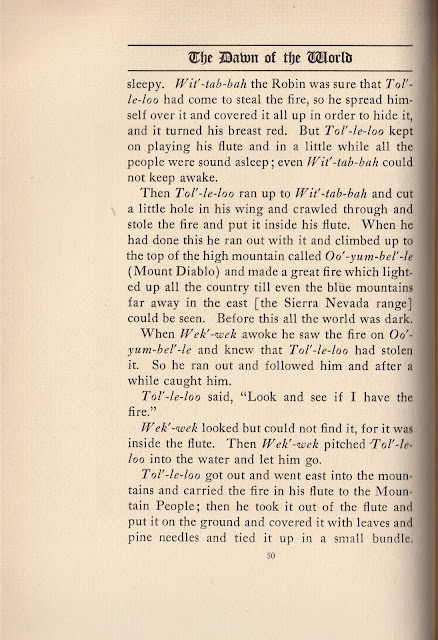 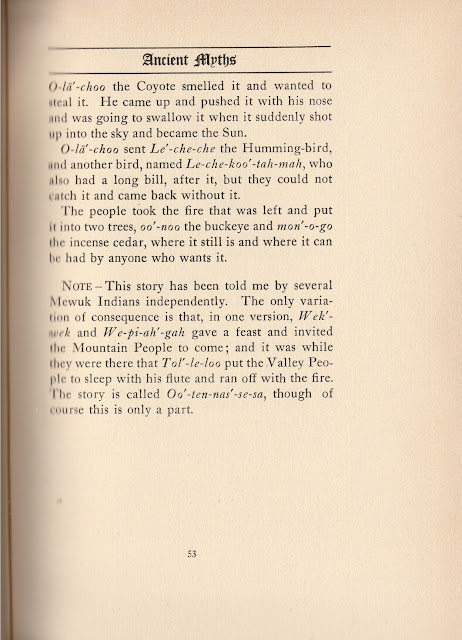 This is a story I call dangerous because it definitely is best told playing the flute at the points where it is putting the Valley People to sleep.  There's another similarly dangerous story from the North West Coast about how Raven steals water for people by telling an intentionally boring story to put to sleep the miser who has the world's water.

There's another danger telling this story.  I won't tell those names with the exception of our hero, Tol'-le-loo, the White-footed Mouse, as I'm unlikely to have the resources of Clinton Hart Merriam, who tried to learn the languages of the rapidly disappearing California Indians.  His work as a naturalist made the names of the various animals something he preserved in his telling the story.  It's also interesting to learn he abandoned his animal focus in favor of preserving the languages and customs of those Native Americans.  He was able to switch careers because he went on the same two-month Harriman Alaska Expedition mentioned in last week's article about George Bird Grinnell.  A decade later when Edward Harriman died, his widow gave Merriam a grant to study whatever he wanted and so he became instead an ethnologist.  It's sad Merriam's advocacy is largely unpublished and stored in the basement of the University of California Berkeley's Anthropology Museum.  Considering that museum's more than 3 million objects, field notes like those of Merriman, and the possibly disintegrating photos, sound and film recordings, researchers need to find ways to preserve and bring them into a useful view.  It sounds like the end scene of "Raiders of the Lost Ark."

Possibly that's a danger when too much is gathered.  Like Tol'-le-loo I got fired up in my own gathering, in this case stories, using the flute.  Today's article has gone on long enough.  Next week I want to talk about why the Native American flute is useful, easy to begin playing, and relatively inexpensive for a musical instrument.
*******************
Here's my closing for days when I have a story in Keeping the Public in Public Domain.
*****************