The One-Room Schoolteacher Looks at Education

Earlier this month my One-Room Schoolteacher program was presented at Reminisce programs in a pair of Capital Area District Libraries.  I also am booked this summer for a one-room school reunion.  All of this had me reviewing the program.  Online the Michigan Arts and Humanities Touring Directory has a video clip from an earlier performance of the program on YouTube.  I have been given continued acceptance in the directories and will be continuing in 2019-2021.  Can't recall when I first went into the directory, it's been so long!, but the Michigan Arts and Humanities Touring Grants are an excellent source for state non-profit financial assistance.  I further commend and support the Michigan Humanities Council for their work on behalf of our state's cultural climate and remember their grant-writing workshops from when I was writing successful mini-grants as a librarian.  They even have an online video to help learn how to write grants!  Our state Humanities Council works hard to help even the most remote location here in Michigan.  I've always found the staff helpful, so contact them by phone, email, or fax with your questions and comments.

While looking at my complete program I noticed an audience question about when the grading system changed to letter grades.  The best answer comes from a site called Classroom which gave the History of Grading Systems.  Colleges wanting to evaluate applicants were the first to seek a standard method.  Online discussions there make me aware that the percentages for an A, B, C, et cetera may differ as well as being controversial, but their paragraph on early K-12 grades shows evaluation shifted when compulsory education began.  Suddenly the number of U.S. public high schools went from 500 to 10,000 in the forty years from 1870 to 1910.  In my program about Liberetta Lerich Green I often mention her daughter Loa, who was a bit of an educational pioneer here in Michigan, including teaching science at Big Rapids when it was one of those few early high schools.  She will be the subject of a future article here.

Teachers have always found grading the least enjoyable part of their duties.  A fellow storyteller, Anthony Burcher, tells the following story and swears it's true.
"True story: during one of my Freshman years in college, this senior, her name was Bernadine, had a professor not turn in her grades on time and they were not going to let her graduate. A lot of us went to the dean's office, sat on his lawn and began chanting, 'Bernadine, Bernadine!' In hindsight, it was not our best chant and did explain why a lot of us got arrested for making threats."

If that doesn't make sense, read it out loud.

Well back to serious stuff.  Did you realize that McGuffey, yes, the one behind more than a century of Readers, believed in bringing fun into the classroom?   O.k. we may not think of Spelling Bees in that category, but it was revolutionary back in the 19th century from his origins as a "roving" teacher at the age of 14, beginning with 48 students in a one-room school.  His students brought their own books, most frequently the Bible, since few textbooks existed.  Try having a union contract with that class size and conditions!  Wikipedia has the usual articles on him and his Readers, but the same information and more originated with and can be found in the New World Encyclopedia  article about him.  I love his instruction to teachers to read aloud to their classes.  This statue honoring him has an interesting rear. 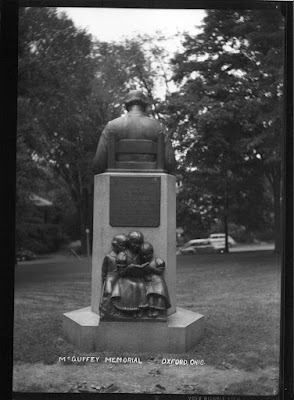 I didn't realize the McGuffey's Readers most used from 1879 on were not by him nor was their content approved by him even though they carried his name.  Those are the readers most people know and use, including my One-Room Schoolteacher persona.  An unnamed newspaper article came in one of my books saying that "Although royalty payments from his famous Readers had ceased long before he arrived in Virginia (LoiS: 1845 according to New World Encyclopedia), McGuffey eventually received some additional funds for later revisions.  And after the Civil War, the grateful publishers also gave him an annuity--a barrel of choice smoked hams every Christmas."

Here in the greater Detroit area Henry Ford's attributed his own education and moral views to the Readers, but they were McGuffey's original series.  The original books were criticized for their anti-minority ethnic and religious views with Native Americans called "savages" and anti-Semitic comments typical of the 1830s.  The attempt of the later edition according to the current publisher, John Wiley & Sons was "to meet the needs of national unity and the dream of an American 'melting pot' for the worlds' oppressed masses."  Today we may object to some of those earlier views the New World Encyclopedia attributes as "Most prominent post-Civil War and turn-of-the-century American figures credited their initial success in learning to the Readers, which provided a guide to what was occurring in the public school movement and in American culture during the nineteenth century."

That same unnamed newspaper tells about Henry Ford's purchase of the McGuffey family home and barn near Youngstown, Ohio and taking the barn timbers to make a one-room school.  (LoiS: it must have been just over the state line as The Henry Ford lists it as being originally in Pennsylvania.)  Ford's Greenfield Village is where you can see those buildings among others at this major tourist attraction here in Dearborn in the shadow of a Ford factory. 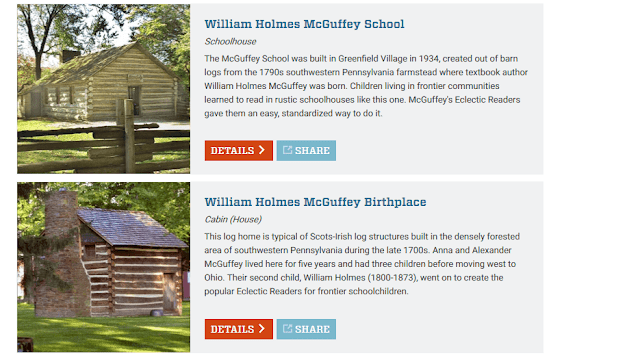 The Henry Ford website had those two items among 42 on their own One-Room Schools collection.  For students about to visit a one-room school or others of us interested in one-room schools, their online digitized collection is worth visiting.

In my talking with attendees to my program I find they regret the loss of religious values -- the revised Readers retain religious views without the "Calvinist values of salvation, righteousness, and piety, so prominent in the early Readers." (I'm not sure if that quote originates with the New World Encyclopedia or the publishers of the Wiley editions.  My own revised editions are reprints predating Wiley.)

Another major complaint is the loss of cursive writing in today's schools.  It has become a mystery to today's children with adults at the programs complaining children can't read the letters they have sent to them.  One grandparent even talked about sitting down with her grandchild, showing the importance of having a signature, and helping create one.  We're heading back to the days where the illiterate signed by making an X!

Here are the final two lessons, LI and LII (yes, Roman numerals for 51 and 52) in the very earliest book, the Primer, given to children as young as five.  It shows these more secular, but still religious values, and is followed by "slate exercises."  Each lesson opens with new vocabulary.  Some of the earlier lessons include sentences in manuscript or cursive writing as early as lesson five.  Could today's five year old students manage that?  I don't give all of the penmanship exercises here, but, maybe the final page of the script alphabet will be helpful showing the upper and lower case letters. 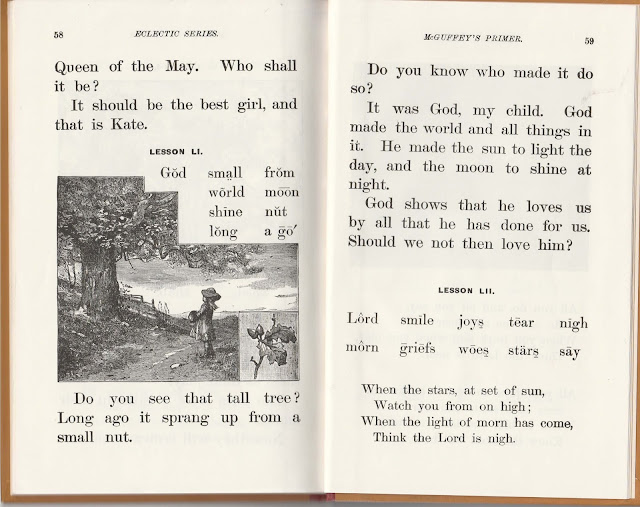 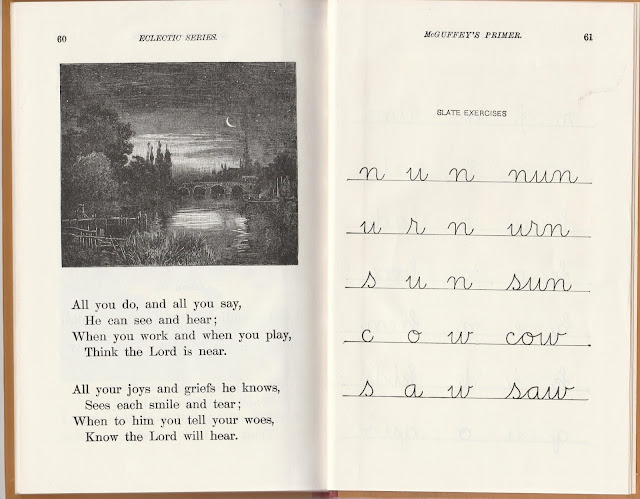 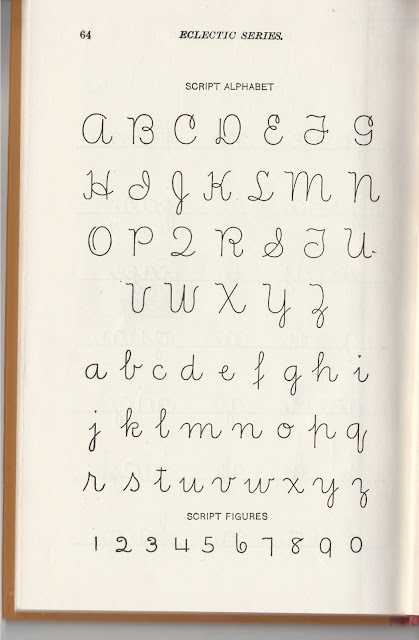 I was taught to write a few of my own letters differently, but can usually decipher earlier handwriting when reading historical documents.  Will today's children be able to do that if they can't even read messages accompanying their birthday gifts?