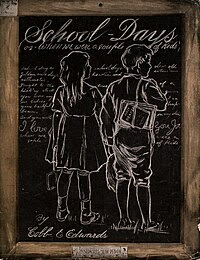 The 1907 song's chorus starts out with "School days, school days, dear old Golden Rule days; Reading and 'riting and 'rithmetic, taught to the tune of the hickory stick."

Curricula throughout history are always changing, but the Three Rs remain basic.  How they are taught, however, also may change.
Hornbooks and embroidered samplers introduced ABCs and 123s. Personal slates and a blackboard followed. Younger students did lessons with a slate and slate pencil. Older students still might use a slate for practice work, but they also learned to use steel nibbed pens, an ink sponge, and practice paper.  Yes, that means inkwells for dipping a girl's hair and also learning to minimize ink splotches.
The progression of the Three Rs in the 1800s into the 1900s and beyond still seems very familiar, especially mathematically.  Arithmetic traditionally progresses from knowing numbers, to addition, subtraction, multiplication, division, then on to the more advanced fractions, decimals, and percentages, ending with the mysteries of word problems.  Reading, writing, and grammar progressed beyond the alphabet with word families, and on into readers.  Just as students by the seventh grade in a rural school in 1890 did not use the same supplies as today's students, they didn't necessarily study the same subjects. Courses in 1890 included reading, spelling, penmanship (remember this was what we would call a Middle Grades student), grammar, physiology and hygiene, arithmetic (mostly with an emphasis on practical math used in business and on the farm), and geography.

Students used textbooks, often sharing their books. Free textbooks statewide were approved by law in 1889, and 520 school districts implemented it in the first year. The McGuffey school textbook series is the best known. It was created by William Holmes McGuffey, a Pennsylvania teacher, preacher, philosopher, and university professor. It was the standard textbook series for schoolchildren from 1836 through the 1920s. The books -- a primer and 6 “eclectic readers” – emphasized the fundamental skills of reading, writing, and arithmetic, with lessons stressing the importance of honesty, thrift, and hard work. Next to the Bible, these books were the most important force in shaping the minds and morals of their young readers. Learning methods included repetition and memorization of verses such as the popular “Mary’s Lamb” found in the First Reader. They were not the only readers used as others were chosen, too, especially beyond the first three by McGuffey, but they certainly were a staple for a long time. Nationwide, it is estimated at least 120 million copies of McGuffey's Readers were sold between 1836 and 1960, placing its sales in a category with the Bible and Webster's Dictionary. The Wikipedia article on McGuffey Readers is fascinating and I heartily recommend reading it for even more information than this blog has room to mention.

By the 1900s the curriculum expanded greatly with civics, history, drawing, literature, language and grammar, including orthography, which is the diagramming of sentences, nature study, sewing, and agriculture.  By this time, penmanship generally was the Palmer method with endless circular spirals and straight line groupings of even height and space.  Penmanship put those inkwells, steel nibbed pens, and ink blotters or sponges to use.  The world of ballpoint pens must have seemed like science fiction!  There also may have been singing and Bible teaching every so often as enrichment.
By the late 1870s, the State Teachers Association and State Superintendents for Public Instruction began to make recommendations outlining a uniform course of study specifying the subjects to be taught each year. The first version of this outline was presented in 1881 and defined a daily program for the schools, listed textbooks required and accessories needed by the student, teacher, and schools. The outline was modified in 1883 and a new course of study was adopted in 1890. About the only major change to the course of study for rural students between 1881 and 1890 were the additions of hygiene and physiology as mandated by law. The late 1880s also saw more civil government emphasis as part of the U. S. History courses.

Irregular attendance made it difficult, it not impossible, to follow a rigid plan of studies. Despite a state law passed in 1871 mandating compulsory attendance, enforcement was minimal at best.  The average length of the school year was 7.6 months, but this figure varied widely, especially in rural districts. Country schools often had two terms during the year. Winter term had to be at least three months for the school district to receive a share in the distribution of interest from the primary school fund. In 1883 the Michigan legislature firmly decreed that all children between eight and fourteen must attend school at least four months a year.  (The Truant Officer is mentioned later in this series.)

While the school year varied over the years and by a school's location, the school day's length seems fairly consistent.  School might start at 8:30 or 9, have a 15 minute morning and afternoon recess, an hour lunch break, and end at either 4 or 4:30.  Some schools had large bells for the teacher to ring, otherwise a handbell called the students back to class.

It's time for a "recess" now on the topic of Curriculum.  Whether in Michigan Month or not, I enjoy reenacting the old-time School Teacher. There's always something new to discover. It's truly an education!