I may miss the weather of Saint Louis in winter (although it's far grayer and icier than here in Michigan), but confess I've adjusted to what passes for normal Michigan summers.  We normally get about a dozen days of 90s over the summer, but this year we managed that in the first month.  By the time this appears I'll be in Kansas City, Missouri at the

I sure hope they get a cold spell for the time I'm there, but I'm not counting on it .  This summer has been enough to make me post today's story.

Adolf Wenig wrote Beyond the Giant Mountains; Tales from Bohemia and the illustrations are by his brother, Josef Wenig, with the translation by Lillian P. Mokrejs.  It's an interesting book with all the stories related to the devil -- who doesn't always get the best of the situation in the stories.  It remind me of two most enjoyable books by Natalie Babbitt,

Both books are highly enjoyable and also has the devil sometimes getting the worst of bargains.

Natalie Babbitt is best known for Tuck Everlasting, but these two are definitely worth more attention than they received.

Even at that, they probably are better known than Beyond the Giant Mountains.  Let's change that with today's story. 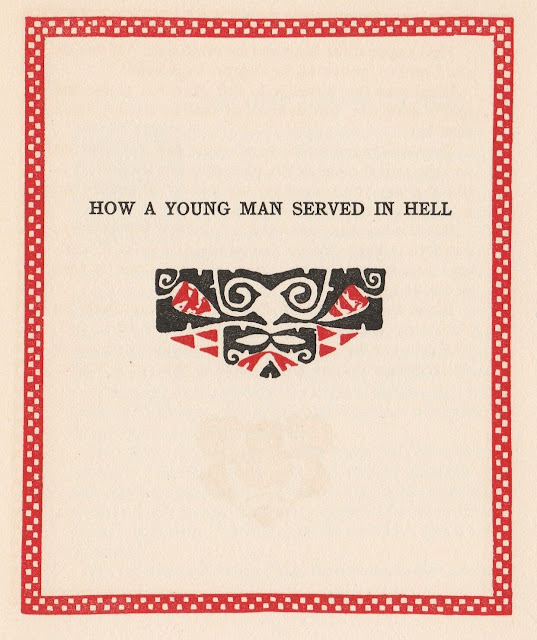 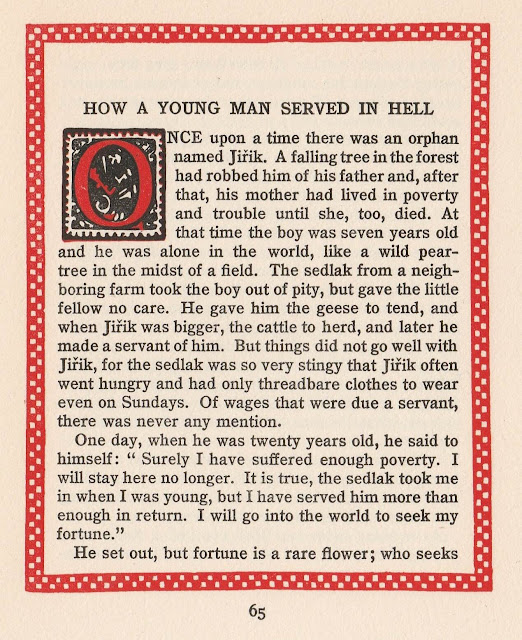 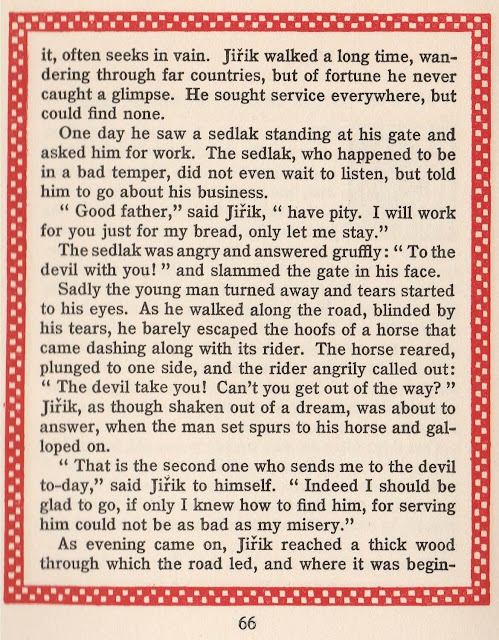 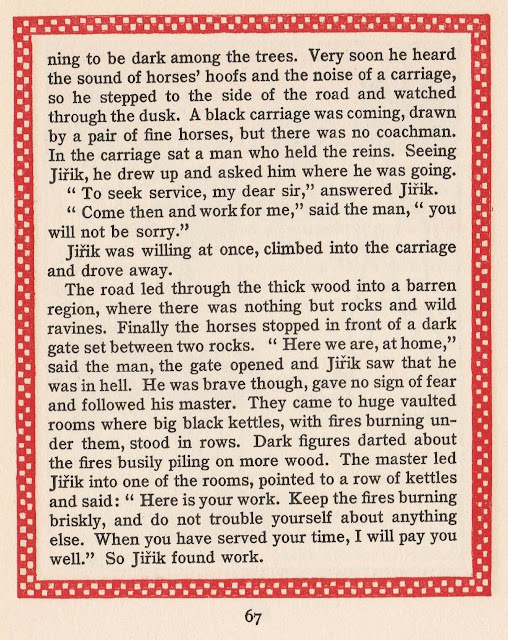 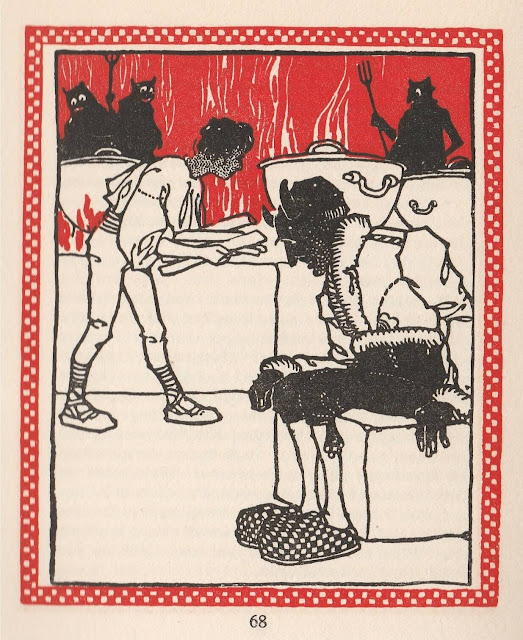 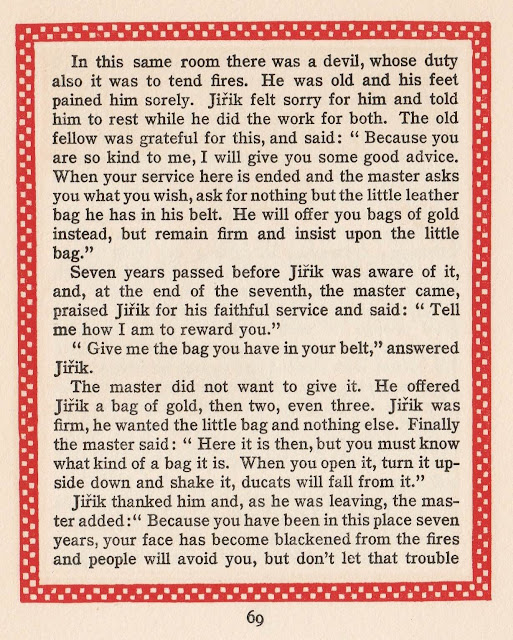 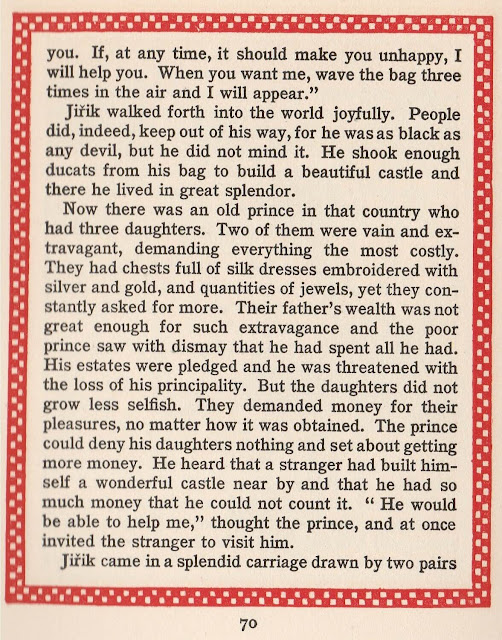 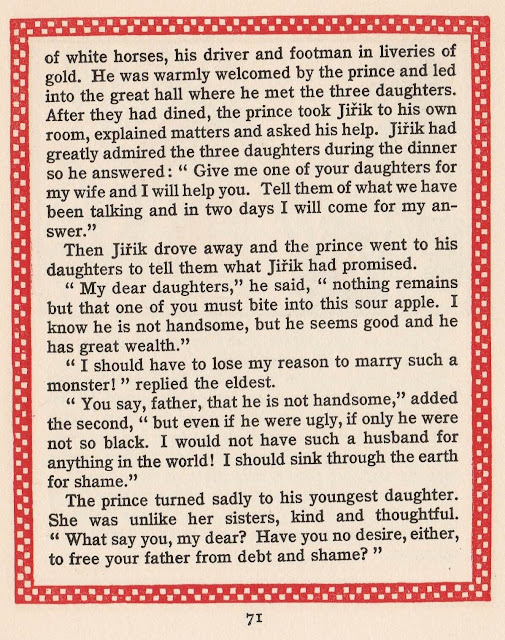 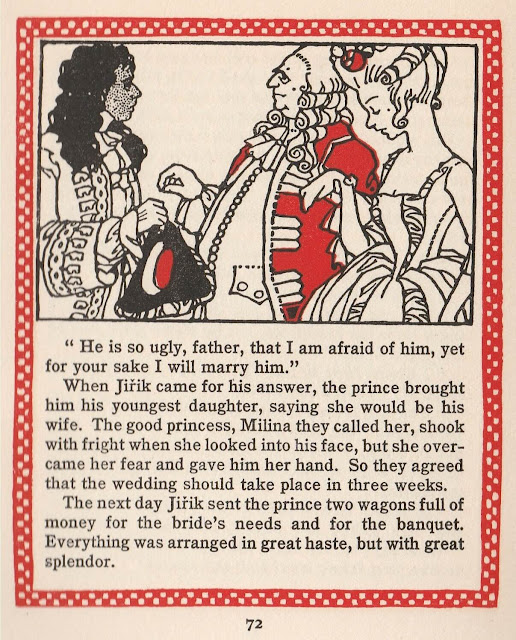 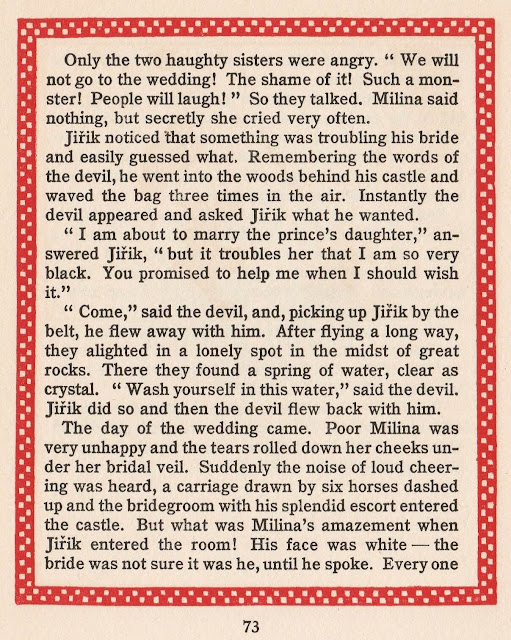 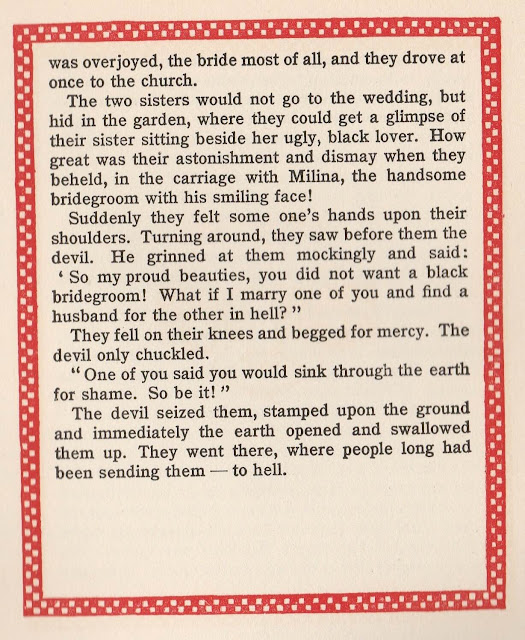 Of course you recognized a few familiar themes there as they are part of the world's folklore that travels.  By the way if you wonder where is Bohemia, it's the present day Czech Republic.

As little as most people outside Europe may know about Bohemia, even less is known about Adolf Wenig.  Only the most basic of facts are listed about him in English.
Born: August 13, 1874, Staňkov, Czech Republic
Died: March 19, 1940, Prague, Czech Republic
Books: Beyond the Giant Mountains: Tales from Bohemia
Children: Jan Wenig, Adolf Wenig
Libretti: The Devil and Kate, On Easter Even

Here's a Google translated page of his Czech Wikipedia article where you can see he wrote far more than just this book.  Among his books are listed thirteen as fairy tales and legends and he also wrote the libretti for three operas and translated another.  His brother, Josef, was well known for his art in the theater.  This is Josef's Google translated page from the Czech Wikipedia.  Josef also illustrated several books, including several by his brother.  The fact that Josef died in 1939 and Adolf in 1940 is never explained, but those were the years of World War II. The place of burial for Josef is Strašnice Crematory, which Wikipedia says "During both the Nazi and communist era the crematorium was involved in the disposal of bodies resulting from executions and judicial killings. 2,200 decapitated people were said to have been cremated by the 'night shift' during the Second World War."  The Crematory is in Prague.  Adolf is listed on the family tombstone in Prague.  Clearly the world lost a pair of talented artists.
********************

Today's information about the Hodja will be great if you want to find more stories on your own, but otherwise you won't find any stories here.  I do however give you the means to get to some and they even are categorized into six topics.


In my "The Hodja Still Lives! - Part 2" I said today's information would come from Erol Beyman's site, which now can only be found on the Wayback Machine (part of Archive.org).  That link takes you back to July 6, 2004.  I am omitting the PREFACE, INTRODUCTION, GRAPHICS, and LIFE STORY you will find there as I think it's information I've already covered or, in the case of the Graphics, it's difficult to download.  TRAINING has Reading Exercises with 6 stories (Nasreddin and the Pot; Nasreddin Goes Shopping; Nasreddin and the Beggar; Nasreddin and the Smell of Soup; Nasreddin the Ferry Man; Nasreddin's Visitiors). Each checks for Reading Comprehension; Recreating the Story; and Summarizing the Story: Gap-fill Exercise. There's also a section on Learning Exercises with the the story of Nasreddin and the Candles, but I'm told the Java Applets tend to crash browsers, so I didn't try that section.  Instead I bring you Beyman's SOURCES and LINKS.  If you click on STORIES there's a 6-pronged graphic grouping the stories into categories of Family Troubles; Neighborhood; Town Conversations; Animal; Business Life; World Questions.


MAIN HODJA LINKS  (No, I did not check these. you now should feel a bit more comfortable with using the Wayback Machine for sites no longer up and running.)

Nasreddin Hoca Person of The Millennium by Erol Abit

This Remainds Me Of A Story... by Ioan Tenner

Once the Hodja by Alice Geer Kelsey


Next week I promise you will bring a devil of a story .


Posted by Lois Sprengnether Keel at 1:00 AM No comments: