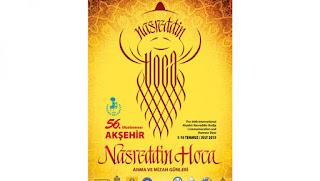 From the 59th International Nasreddin Hodja Festival held July 5-10 of each year in Akşehir, Turkey to an email list, Storytell, for storytellers, this "wise fool" stays alive long after his supposed existence in the 15th century (although some say it was the 13th century).  Whether his name is spelled Hoca or Hodja and beyond Turkey, especially in Islamic countries, there are enough other names for Wikipedia's article to need a whole paragraph on name variants.  The Egyptians claim their 9th century Juha or Goha was merged with his stories.  The confusion and good humored chaos is all so typical of what we should expect of this folk character embraced by many cultures and, yes, tourism in his stated home town.
I've known storytellers who have gone to Akşehir on tours related to the Hodja.  I'm not prone to "bucket lists", but if I were, this would definitely be on mine.  Turkish tourism recognizes this.  Tour guide, Burak Sansal, has a thorough site, All about Turkey, showing the many cultural tours he can do.  (Turkey's history includes many ancient cultures as well as the Islamic and Christian roots there.)  He gives a page on Nasreddin Hodja, including those many names and places and an explanation for why it is sometimes transliterated Hoca, also that it means "teacher."  His site and others stress the Hodja's humor, calling the few stories he gives there Jokes.

The online Turkish journal, Raillife, in 2015 opened with the poster I have at the top of today's article.  It talked about the Humor Train going to the festival, including a caricature competition.  The Daily Sabah, sponsored by Turkish Airlines in 2016 did an article about "Nasreddin Hodja: traditional tales from a witty sage."  They called him a "philosopher with a good sense of humor and the ability to convey symbolic messages through storytelling, his uncanny ability to highlight the social problems of his time by his use of humor was legendary. Nasreddin Hodja often addressed the connection between wealth and social problems, attributing the habits of the wealthy to the problems faced by society."  They, too, give a few Hodja stories, because it's almost impossible to avoid.  For a bit more on the Hodja and Turkish tourism, there's also Business-with-turkey.com in Portuguese, Spanish, English, and German.

Turkey isn't the only one to recognize what a gem they have in the Hodja.  The year 1996 was proclaimed "Nasreddin Hoca year" by UNESCO.

I earlier mentioned the email list for storytellers, Storytell.  Earlier this year a member asked for our favorite Hodja stories because his father-in-law passed away unexpectedly and "was much like Nasruddin Hodja" and he wanted the Hodja's "wit, his wisdom, his whimsy, and his desire to be helpful (even if it seems strange and foolish)."

Of course I responded.  This was what I wrote.

Storytell list members prefer their privacy in discussion, even though storytelling itself can make us very public in our telling.  (I understand because an earlier employment at a library meant my own comments needed to be unattached to my work there.)  As a result, if you clicked the earlier link for Storytell, you would need to subscribe to access the archive currently maintained by the National Storytelling Network.   Next week I plan to continue with Hodja stories from there and other sites specifically from storytellers.  This will give contributors a chance to say if they wish to share a story anonymously or publicly.  At least one storyteller has an online video I expect to share.

Next week on Saturday, July 14, it's officially Pandemonium Day.  That seems like a great way to celebrate it.

In the meantime I will include some other storytelling sites I usually recommend at the end of my Public Domain posts.  Many will include the Hodja.
*******
The email list for storytellers, Storytell, discussed Online Story Sources and came up with these additional suggestions: