Irving et al about the Declaration of Independence

The musical 1776 gives a great view of the fighting involved in signing the Declaration of Independence and how our Founding Fathers were as creator, Sherman Edwards, said "the cream of their colonies. ... They disagreed and fought with each other. But they understood commitment, and though they fought, they fought affirmatively." (Personally I look at our country and its divisions and wonder if such a consensus could be reached today.)

I didn't know Washington Irving had written a Life of Washington, but it gives a glimpse of how we nearly celebrated the Second of July.  (Like the musical, he focuses on John Adams.) 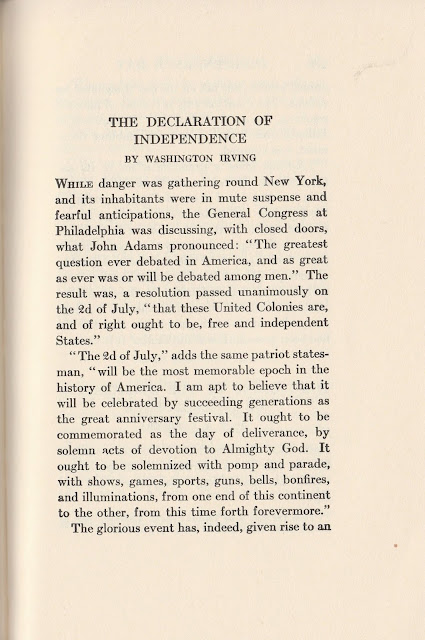 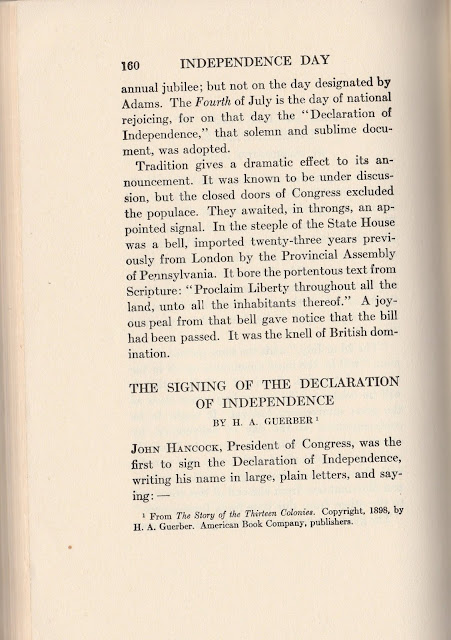 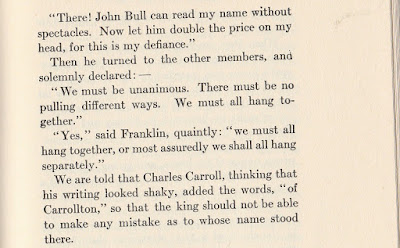 I let that flow into H.A. Guerber's look at the signing as the one followed the other in Frances Jenkins Olcott's book, Good Stories for Great Holidays.  Irving's book, by the way, gets two more excerpts in Olcott's coverage showing better the sense of drama relayed by the author best known for short stories like "Rip Van Winkle" and "The Legend of Sleepy Hollow." Actually there was very little beyond his best-known work that I knew.  Scanning an article about Washington Irving, I learned he must have had a great interest in his namesake as the Washington biography is five volumes! long, spending much of his life on it.  Also Irving represented the United States in both Spain and England under Presidents Van Buren and Tyler.

Now for an anonymous third look at the event from outside Independence Hall and the ringing of the Liberty Bell.  (It comes from the Fifth Year of Story Hour Readings a textbook popular in the early Twentieth Century by E.C. Hartwell, who may have written it.  There were several illustrators for the book, including Joseph Franke', whose signature is in the left corner.) 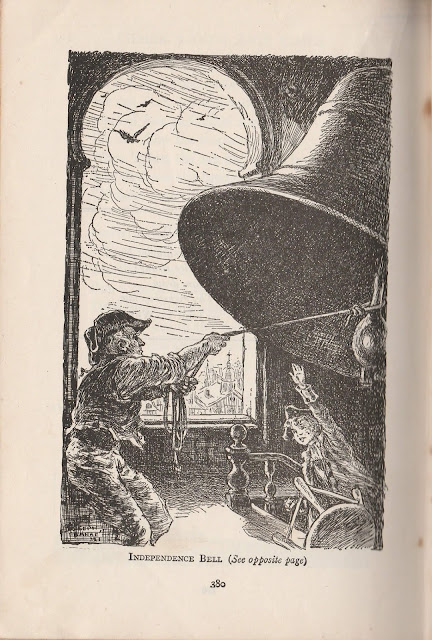 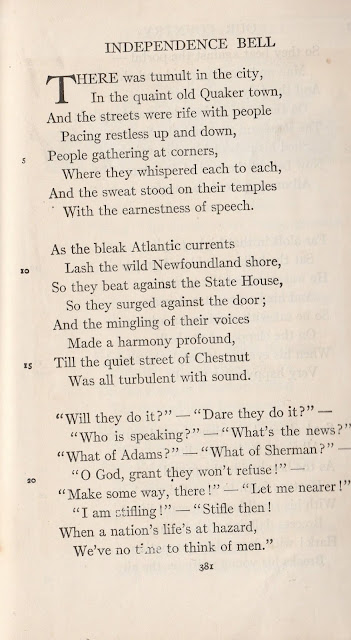 I opened this article with a look at the Liberty Bell and want to mention the National Park Service site about Independence National Historical Park in Philadelphia. It includes such information as the Liberty Bell was originally the State House bell made in London and taken to Philadelphia for the tower of the Pennsylvania State House. It is inscribed with the words from Leviticus 25:10 “Proclaim liberty throughout the land”. It cracked on the first test ring in 1752, so it was melted down and cast again in Philadelphia. Further cracks occurred, so in 1846 for Washington's birthday, the city attempted to repair it. The repair failed, widening the crack further and silencing the bell forever, but not its significance. The site also has teacher lesson plans. While looking for images of the Liberty Bell, I discovered https://notebookingfairy.com/liberty-bell-notebooking-page/ which has various graphics teachers, homeschoolers, and others might appreciate.

Here in Michigan next week I'll be doing a program that includes a mention of the War of 1812 with a bit of emphasis on here in Detroit and across the river at Canada's Fort Amherstburg (now Fort Malden) and the wrap-up of that war in the song, "The Battle of New Orleans."

Because that means we had not one, but two wars with Britain, I appreciated this from the N.P.S. site:
There are two other bells in the park today, in addition to the Liberty Bell. The Centennial Bell, made for the nation's 100th birthday in 1876, still rings every hour in the tower of Independence Hall. It weighs 13,000 lbs. - a thousand pounds for each original state. The Bicentennial Bell was a gift to the people of the United States from the people of Great Britain in 1976. That bell is currently in storage. 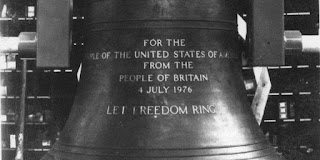 Considering the way Queen Elizabeth II at the dedication in 1976 mentioned our shared heritage of the principles of the Magna Carta, I hope we dust off that bell and display it, too. 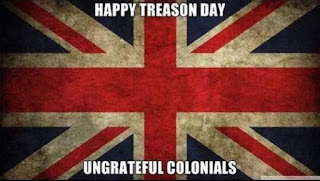 Can't resist this image for a bit of a chuckle.  Even so, remember those who fought in the Revolutionary War were indeed considered traitors and paid with their lives and fortunes.

After two wars, these Ungrateful Colonials are definitely different, but glad to share a heritage and get along again.