Yes, the EU Affects You 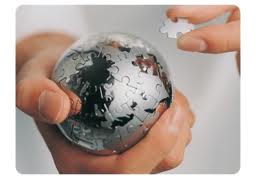 It's said we're all in a Global Village and this week proves it.  It's a tale of the E.U. being the tail wagging the rest of the world.  The tale's unfinished and I'm hopeful the rest of the world will speak up before it's too late and stop the European Union's Parliament from wrecking both the Internet's free access (in a move that makes the U.S. battle for Net Neutrality look like a mere spat) and, worse yet, Copyright and the concept of Public Domain.

I admit I sometimes get on my soapbox about Copyright, especially shouting about the Sonny Bono Copyright Term Extension Act which went from a fixed 28 years with an additional 28 year extension available to life of the artist plus 50 years.  I breathed a sigh of relief when we recently killed the Trans-Pacific Partnership which would have stretched it world-wide so expiration could not come until 70 years after the death of the author.  After all, how many authors around the world die without anyone noticing even if you try to find out?  I've been cheering the release of works from 1923 on to start at the end of 2018 ending the SBCTEA.  When this article,  https://boingboing.net/2018/01/08/sonny-bono-is-dead.html, said even the Authors Guild didn't support copyright extension beyond 50 years at most it looked as if the concept behind Public Domain might be reviving from near death.

The Public Domain Manifesto organization does an excellent job of telling us about Public Domain's role in both looking back at our cultural heritage and looking forward to the way it provides the "raw material from which new knowledge is derived and new cultural works are created."  The Authors Guild even pointed out "many of our members benefit from having access to a thriving and substantial public domain of older works." The P.D. Manifesto has both international organizations and individuals signing it and I urge you to go there and do so, too.

Earlier this week I posted about Article 13, which unfortunately has now passed out of the nine member committee and on to the full Parliament.

As one storyteller, however, pointed out when I also sounded the alarm on Storytell, the email list hosted by the National Storytelling Network at Storytell listserv, "Suffice it to say that, regardless of the voting results, the topic will be far from over."

He was correct since it now is up to the EU Parliament https://www.theguardian.com/technology/2018/jun/20/eu-votes-for-cop..., requiring platforms like Google and Microsoft to install filters.

An unrelated email I received this past week about clarification of Public Domain mentioned a case where Project Gutenberg posted 3 authors in the Public Domain in the U.S., but not in Germany so they were sued by the German Publishers.  I checked and found this article, https://www.techdirt.com/articles/20180306/03423339363/project-gute.... As a result German users are now blocked from accessing Project Gutenberg.

Public Domain initially was planned to begin after 14 years.  Its creation was intended to keep alive our cultural literacy.  That may have been naive, but the EU has already required sites all over the world to check to see if EU meet their privacy requirements with General Data Privacy Regulation or GDPR.  This latest regulation makes that look like an annoying test of the water to see if they can control the worldwide web and more.

Looking at what this means for the Internet and Copyright, the tech supersite, CNet says:

Article 13 would force all online platforms to police and prevent the uploading of copyrighted content, or make people seek the correct licenses to post that content. For the most part this would mean filters that check content as it's uploaded would be mandatory for platforms including Facebook, Instagram, GitHub, Reddit and Tumblr, but also many much smaller platforms.
YouTube already uses such a system -- called Content ID -- to protect copyright infringement, but the technology to do this is extremely expensive and has taken over 11 years to build and refine.

There's much more to the CNet article including how the less discussed Article 11 will force tech giants to police the internet (providing no recourse if they fear something might be restricted) and all smaller platforms into even more restrictions because they can't afford to do otherwise.

The CNet article ends with "How will this affect me, an EU resident?", but, as GDPR and also the incident with Project Gutenberg shows, it will chill progressively more the internet and make users of what should be Public Domain even more paranoid.  That certainly includes small publishers and storytellers attempting research. 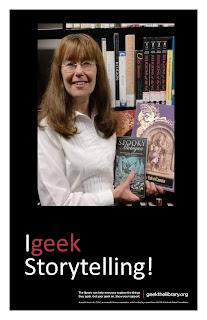 So what can we do?

Normally I'd say this is a matter involving another country and they won't listen to us.

That is precisely why we do need to contact them and let them know this affects the whole world.  We are a Global Village when it comes to the internet.

We can spread the word and also send emails letting the members of the European Union's Parliament know why this matter is important to us.

How do we reach them?  https://europa.eu/european-union/contact/write-to-us_en is a form.  You have a limited, but adequate space to write your "Enquiry."
I posted under the Subject: Articles 13 & 11 the following (spacing is a bit "wonky" here as I copied it from the form):
Dear Members of European Parliament

Creativity and free speech will be harmed by Article 13 because algorithms will have difficulty telling the difference between infringement and the
legal use of copyrighted material vital to research, commentary, parodies
and more. This is far too high a cost for enforcing copyright.  Copyright was intended to include Public Domain for older material to keep our
cultural heritage alive! As a storyteller in the U.S., I rely on Public Domain material frequently for my research.

No filter can possibly review every form of content covered by the proposal including text, audio, video, images and software. Article 13's mandate is
technically infeasible and it is absurd to expect courts in 27 EU Member States to be constantly working out what the “best” filters might be.

It is a bad idea to make Internet companies responsible for enforcing copyright law. To ensure compliance and avoid penalties, platforms are sure to err on the side of caution and overblock. To make compliance easier,
platforms will adjust their terms of service to be able to delete any content or account for any reason. That will leave victims of wrongful deletion with no right to complain – even if their content was perfectly legal.
***

I don't take the credit for that.  My Canadian friend and colleague, Elinor Benjamin wrote it and I merely changed it to the U.S.

If you value the internet or Public Domain, I beg you to take the simple step of flooding the E.U. Parliament with your sharing world opinion.  It will affect you. 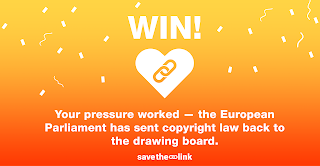 The following from OpenMedia.org shows the results of international attention to this.  Notice that the issue was narrowly decided and will be considered further this autumn.
Posted by Lois Sprengnether Keel at 1:00 AM