I confess it: I'm a Russophile.  It has nothing to do with politics, everything to do with my loving so much of Russia's cultural offerings.  Naturally Russia's folklore has a large place in my library.  Already I've given two folktales here and today offer a third.  Tomorrow I will give an extra resource to find Russian folktales for any similarly interested.

This is a big topic for me, so I want to do more than the usual presentation of today's story.  When you have a large area of interest it's hard to choose, but today I present one of Russia's most fascinating figures, Baba Yaga!  (By the way, if you are saying the name, it's pronounced Bah-buh Yah-gah with the stress on the gah.)  The Russian witch scaring Eastern European children for centuries is written up, of course, in Wikipedia where we even learn of a story, "The Maiden Tsar", in the Afanas'ev collection with three sister witches all called "Baba Yaga."   Three other articles about the old witch worth seeing are at Old Russia -- the only one mentioning  iron teeth, Russiapedia, and at Myths and Legends A favorite story of mine, however, isn't mentioned in Wikipedia nor in my Afanas'ev anthology.

I love the tale of "Prince Ivan, the Witch Baby, and the Little Sister of the Sun"  told in Arthur Ransome's Old Peter's Russian Tales.  I think her iron teeth are a key identifier of this being a young Baba Yaga.  She's normally only seen as an adult, and often elderly.  The word "baba" is discussed in the Wikipedia article and would eliminate someone as young as the Witch Baby, but it sounds like her early years to me.   It's always tricky to find a story in another language because the title may change.  My Pantheon edition of the Afanas'ev collection has an index with 14 stories under Baba Yaga (and three just listed as Witch).  Another listing of stories about "Ivan, Prince" gives five of those Baba Yaga stories and another ten without her.  While Ransome has a Baba Yaga tale earlier in his book, his delightful tale about the "Witch Baby" isn't in the Pantheon edition.  In both stories he mentions the iron teeth.  Ransome claims his tales may be found in Afanas'ev "or in solemn, serious volumes of folklorists' writing for the learned."  Ages ago I taught myself a now nearly forgotten reading knowledge of Russian.  The Pantheon edition, translated by Norbert Guterman, is still under copyright so I can't post it.  I'm told some Afanas'ev tales don't appear in the Pantheon edition and other major Afanas'ev collections in Russian.  Erotic stories were part of that extra material.  I don't care to find that, but somehow doubt the Witch Baby was written "for the learned."  Ransome is a long way further in the alphabet, so maybe by the time I reach that part of my collection here I can still solve the mystery of her origins.  If you know more, please be sure to let me know!

UPDATE:  I worked on this before the date when it was to be published.  In the process of checking the many Russian books I have, I checked the Afanas'ev translation by Leonard Magnus.  While it is smaller, I  found "The Witch and the Sister of the Sun."  I still prefer the Ransome re-telling as both better orally and does a good job of clarifying some things.

I first discovered Baba Yaga in Blair Lent's book by that name.  In searching to find more, I learned he wrote it under the pen name of Ernest Small.  That was a relief as I knew he illustrated it, but could never recall who was the author.  The book claims to take many of the elements of the Baba Yaga tales and put them together in his version.  I urge people to compare today's story with Lent's book.  When reading today's selection I felt right at home in that 1966 picture book telling of the witch who eats "bad (Russian) boys and girls." I trust you will enjoy Verra de Blumenthal's version. 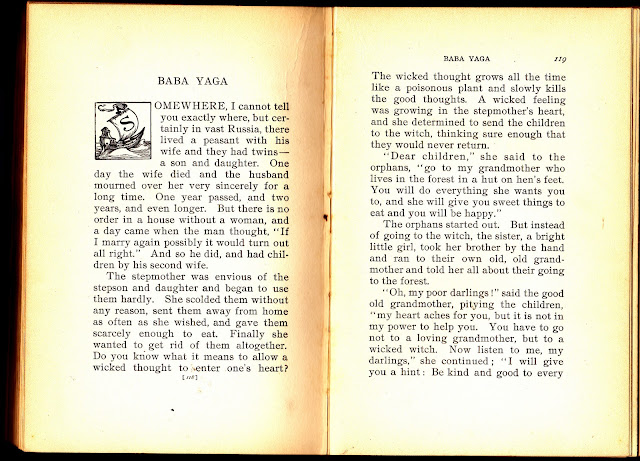 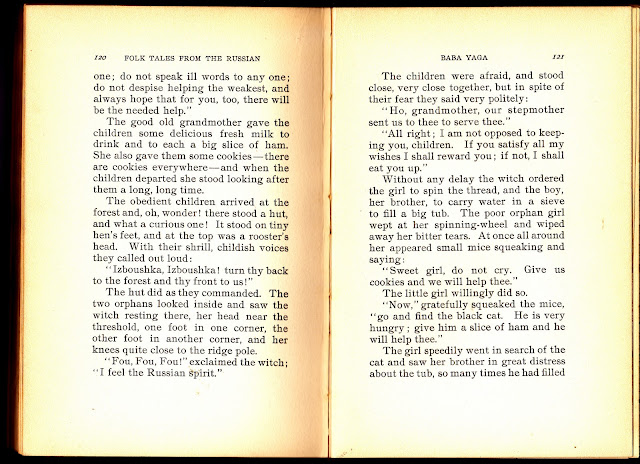 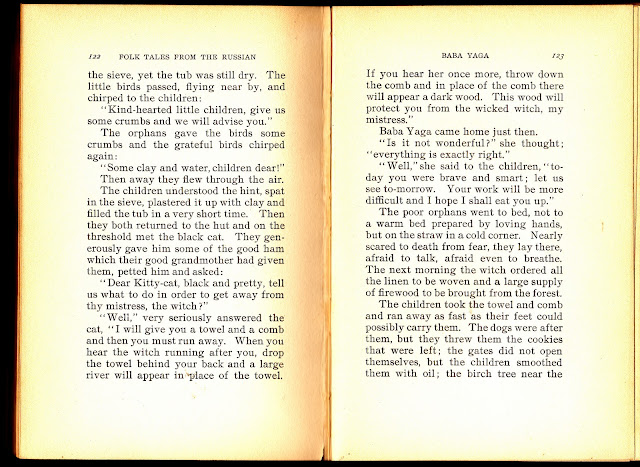 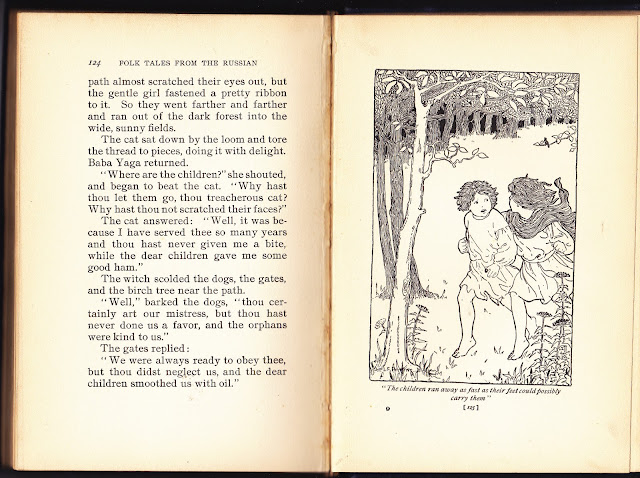 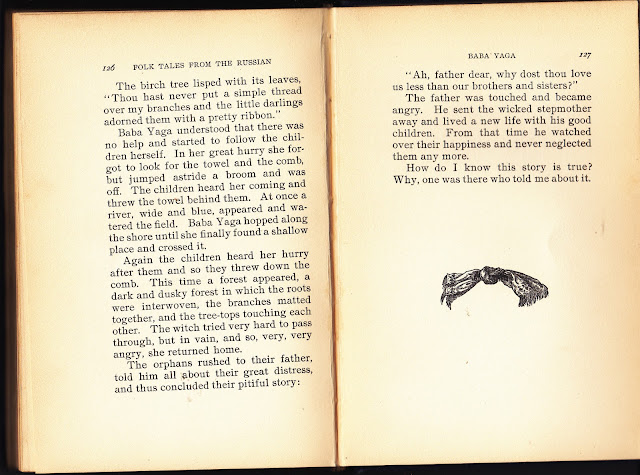 So now you have even been assured the story is true. . . that's not the same as saying it actually happened.  As storytellers know, the two are different.

The wonderful Project Gutenberg lets you read the complete book, Folk Tales from the Russian.  By the way, the Gutenberg volume omits an easily missed page before the title page which says: The illustrations for "Folk Tales from the Russian" are by Lucy Fitch Perkins after sketches by the author.  (Even that page has a lovely graphic showing both her taste and skill.)  She deserves mention.

Blair Lent's book is currently out of print, but under copyright, so you will either need to borrow or buy a used copy of his Baba Yaga and see what captured my attention so long ago.

If you are interested in my listing of English versions of Russian folklore, tomorrow will be an extra posting.  The usual Wednesday/Saturday schedule then resumes.
******************************************
This is part of a series of bi-weekly posting of stories under the category, "Keeping the Public in Public Domain."  The idea behind Public Domain was to preserve our cultural heritage after the authors and their immediate heirs were compensated.  I feel strongly current copyright law delays this intent on works of the 20th century.  I hope you enjoy discovering new stories.