Until recently, like Don C. Warrington, I thought General John Pershing might have been called "Black Jack" because it was his favorite card game.  Not at all.  On Warrington's site I learned like me, Pershing was originally from Missouri with a strong background in working with African-Americans.  When he went into the military this was just his start as the general was noted for his long-time command of the so-called "Buffalo Soldiers", an African-American soldiers regiment begun in the Civil War.  When the U.S. entered World War I, his ideas weren't always accepted.  President Wilson rejected Pershing's request and put all black units under the French.  Since the U.S. had been reluctant to enter the war, Pershing was more successful refusing to be part of the Allied army, instead calling our army the American Expeditionary Force (the AEF).  The war was in a stalemate after three years, the French army had mutinied and the Russian revolution had begun.  Pershing's ideas did more than separate the U.S. army, he created the first women soldiers by requesting bi-lingual phone operators "Over There" who became known as "Hello Girls." 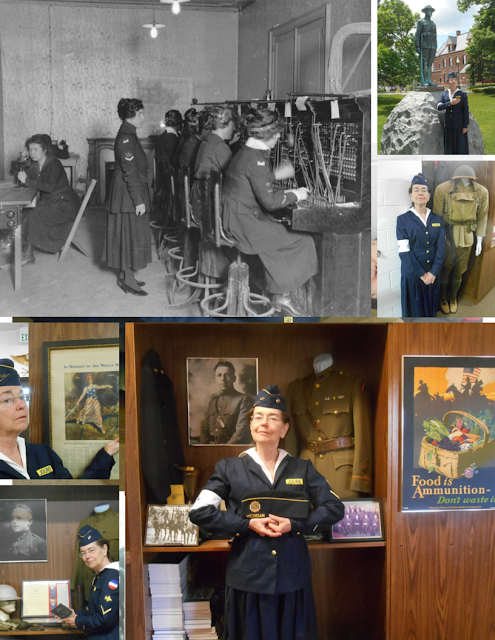 As followers of this site know, I'm working on telling the story of those Hello Girls.  This week was the second of my preview programs testing it with some very different audiences.  I present the story of the women Pershing called "Switchboard Soldiers" through the eyes of Oleda Joure Christides, one of the few women who finally received veteran's status, a process that took roughly 60 years.  It also didn't include most of them because by the late 1970s, out of the 223 serving abroad, only 18 of those serving in France were alive and even then were told they had just become "veterans" and it was not retroactive! 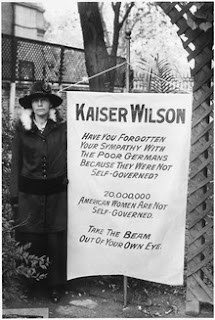 The early 20th century saw the battle for Women's Suffrage come to fulfillment almost everywhere.  (Saudi Arabia waited until the end of 2015 to allow women to vote in municipal elections.)  Here in the U.S. President Wilson initially opposed it, but the war eventually convinced him to support the 19th amendment. I'm rather fond of this August 14, 1917 banner from before the war.

I remember vividly a woman in the now defunct storytelling group, the Mount Clemens Raconteurs, tell of her experience at the voting booth when she was among those first women voters.  It was not something most men of her day were ready to accept!

I don't know if Oleda, who was a teenager needing special permission to go overseas with the other women taking oaths with the Army Signal Corps, ever talked about voting, but she certainly was aware of the decades long struggle to be recognized as more than the "civilian contractor" the Army tried to call her and her fellow soldiers.  Soldier is how they were addressed and Pershing was the one who coined the term "Switchboard Soldiers." The more popular name of "Hello Girls" came from the men relieve to hear "Hello" or "Number Please" instead of coping with the French operators.  Beyond that, their chief operator, Grace Banker, received a Distinguished Service medal when her mobile unit came under fire, and also women could prove they were threatened with court martial.  Both their service and the delay for recognition were definitely a part of the struggle involved in Women's History.

I've promised to produce some of my resources here used in preparation for my program.  Be sure to go to the other articles here under the label, Hello Girls, also found on my ever-growing sidebar of links.  It's the librarian in me that tries to produce as many ways to find information as possible.

I presume online readers are good at online searching.  I've given many links in those Hello Girls articles, especially pointing people to a site created by Oleda's daughter, Michelle Christides, but also want to send you to some articles she wrote for the children's historical magazine, Cobblestone.  If you have access to the Gale Virtual Reference Library database (available here in Michigan through the wonderful Michigan eLibrary) you may access the articles online.  Because they were written in 2006, don't be surprised if you own library has "weeded" them out.  Future researchers may find libraries with space and money constraints don't have old issues, then if a journal can't be afforded in the future you may not find it easily.  Sorry, but I think there's a value in warehousing print, as my own overflowing personal library shows.

Be aware, my focus is oral literature and I don't have a dissertation or other need to follow an official stylesheet in the following bibliography, so if that is your goal it may need rearranging, but still should help you find the material.  I also eagerly await the book Michelle Christides is working to produce.  She has the complete list of the Signal Corps operators and has sought information from their descendants to create their definitive history.  (There were seven units and Oleda was in the sixth, the last to go overseas.)

Because my own work focuses on Marine City telephone operator trainer -- the highest supervisory position open to women at the time -- and musician, Oleda Joure Christides, I am abandoning alphabetical order and starting with C first as her daughter and others in Marine City and beyond have been so helpful and Oleda is my primary focal point.
Banker Paddock, Grace - I Was a "Hello Girl" in The World Wars remembered : personal recollections of heroes, hello girls, flying aces, prisoners, survivors, and those on the homefront, prepared by the staff of Yankee Magazine, 1979. pp. 110-115 (As the head over all the operators, in the very first unit, and the only one decorated for her service, her view of the Signal Corps women is a key part of their story.)


Monahan, Evelyn - A few good women : America's military women from World War I to the wars in Iraq and Afghanistan, Knopf, 2010.

Raines, Rebecca Robbins - Getting the message through : a branch history of the U.S. Signal Corps, Center of Military History, United States Army, 1996.

Schneider, Dorothy and Carl J. - Into the breach : American women overseas in World War I, Viking, 1991.

Wyman, Thomas Sage - A telephone switchboard operator with the A.E.F. in France - Army History, Fall 1977/Winter 1998 pp. 1-9.  (Wyman is talking from the viewpoint of his mother, Dorothy Sage Wyman, who, like Oleda, lived long enough to receive her honorable discharge papers.)

The story of these fascinating and determined women is finally being discovered.