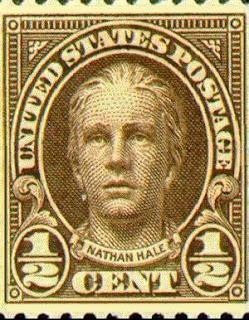 Don't you wish famous extemporaneous speeches from the past had been taped or at least recorded by someone trained in shorthand?  Plato and Xenophon each have their own version of the last speech by Socrates.  Are the Beatitudes exactly as Jesus said it?  (Other speakers of the past can't claim Divine Inspiration for how they were recorded.)  Did a soldier have either an advance copy or write down Queen Elizabeth's Spanish Armada speech?  If famous speeches fascinate you, go to Emerson Kent's Famous Speeches in History, you can even get an audio track or video clip of some speeches.  That site covers people, wars, maps, documents, timelines and much more under the delightful tag line of "History for the Relaxed Historian."

Wikipedia tries to be "the free encyclopedia that anyone can edit."  Their "anyone can edit" feature on Nathan Hale looks skeptically at those famous words along with other facts known or believed about him.  Perhaps you might prefer this article by Mary J. Ortner, Ph.D. about Captain Hale for the Connecticut Society of the Sons of the American Revolution, since he was most certainly a Connecticut Son of the American Revolution.  (Scroll down on the page to get to her article.)

When looking into the facts about the end of this legendary American patriot, we know, for example, that Hale was 21, but did you know many believe a 13 year-old former slave and Loyalist named Bill Richmond was one of the hangmen?  That name is common enough that the Wikipedia article on him debates if it was the same as the former slave of that era who became a famous boxer in England.  Either way, can you imagine being 13 years old and doing that?  Even the character of the man in charge of Hale's hanging, Provost William Cunningham, is debated.  I looked unsuccessfully in Wikipedia under his official name only to stumble upon "Major 'Bloody Bill' Cunningham", which talks about his switch from membership in South Carolina's 3rd Regiment of Rangers to the British army.   There he was known for violent, ruthless raids.  There's plenty of reasons this man, called by rebel soldiers and South Carolinians a villain, continues to fascinate historians.

That cast of characters and the contrast of known facts and controversies could easily enrich this story which gives enough to bring the legend of patriot Nathan Hale alive beyond those words which rallied soldiers and is commonly given when talking about the American Revolution.  It comes from Fifty Famous Stories by Samuel E. Lowe and Viola E. Jacobson.  May it enrich your celebration of the Fourth of July. 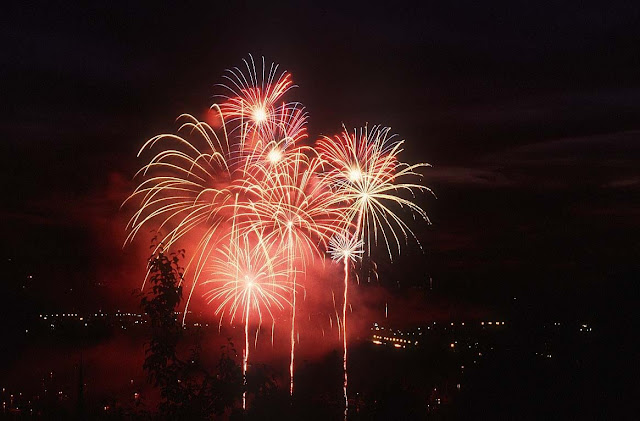 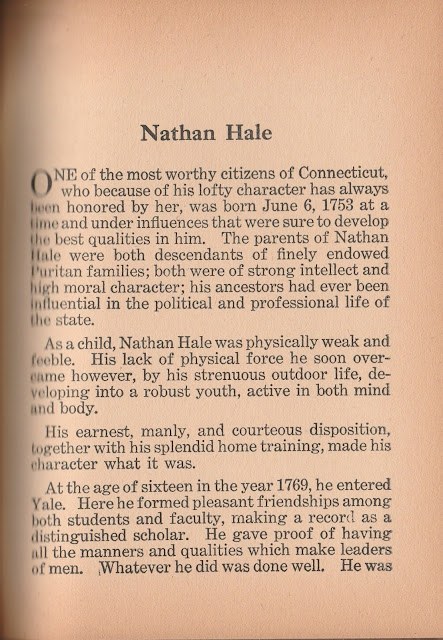 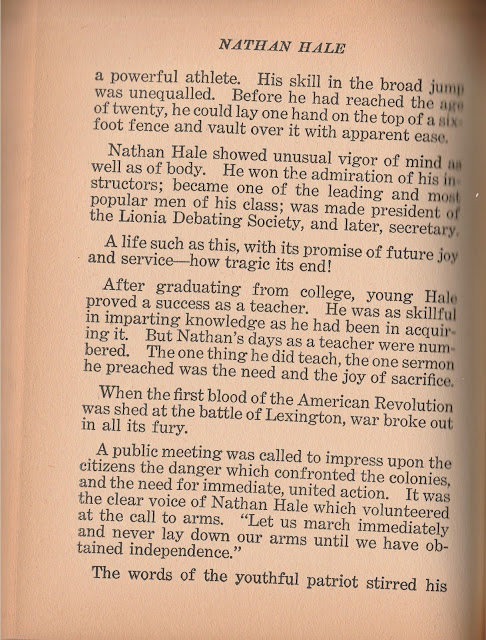 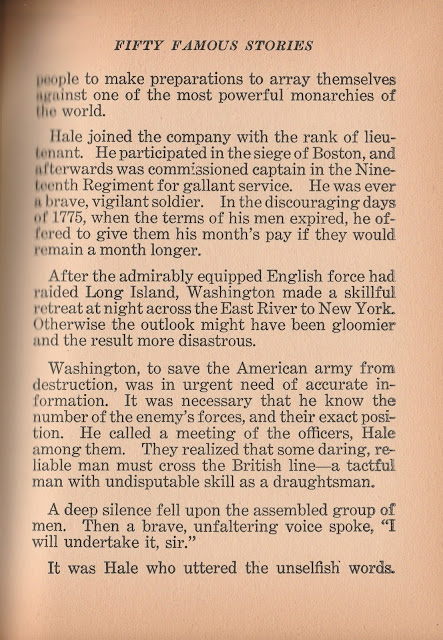 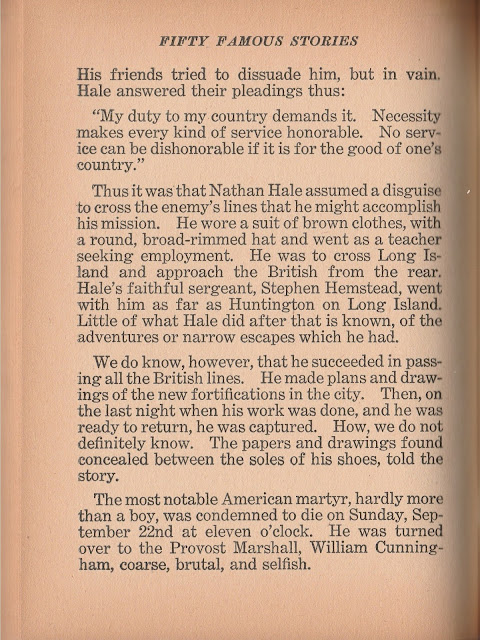 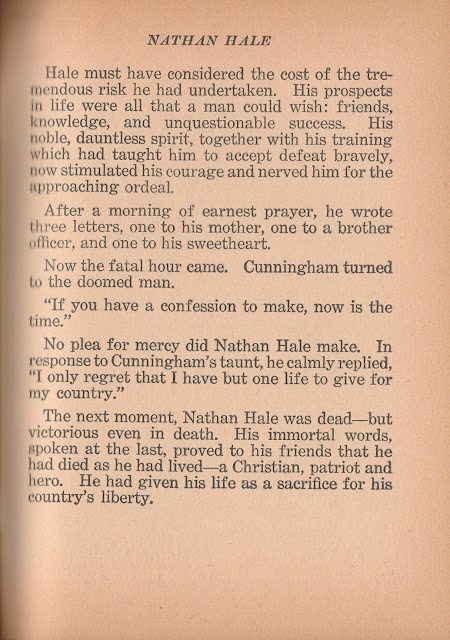 I'm sure that sculpture and the artwork on the postage stamp which opened today's posting, even though Wikipedia cautions us about guessing at his appearance, lets us put a reasonable image in mind of Hale.  Speaking of reasonable images, the bindings of old books fitting our "Keeping the Public in Public Domain" are fragile.  As a result images here may be less satisfactory, with slight blurring or crookedness, than I might like when I scan them.


At the same time, my own involvement in storytelling regularly creates projects requiring research as part of my sharing stories with an audience.  Whenever that research needs to be shown here, the publishing of Public Domain stories will not occur that week.  This is a return to my regular posting of a research project here.  (Don't worry, this isn't dry research, my research is always geared towards future storytelling to an audience.)  Response has convinced me that "Keeping the Public in Public Domain" should continue along with my other postings as often as I can manage it.
Other Public Domain story resources I recommend -
Between those two sites, there is much for story-lovers, but as they say in infomercials, "Wait, there's more!"
The email list for storytellers, Storytell, discussed Online Story Sources and came up with these additional suggestions:
- David K. Brown - http://people.ucalgary.ca/~dkbrown/stories.html
- Karen Chace - http://karenchace.blogspot.com/search?q=public+domain
- Richard Martin - http://www.tellatale.eu/tales_page.html
- Spirit of Trees - http://spiritoftrees.org/featured-folktales
- Story-Lovers - http://www.story-lovers.com/ is now only accessible through the Wayback Machine, described below, but Jackie Baldwin's wonderful site lives on there, fully searchable manually (the Google search doesn't work), at http://web.archive.org and put in http://www.story-lovers.com/ in the search box.  I recommend using the latest "snapshot" on November 2016
- Tim Sheppard - http://www.timsheppard.co.uk/story/storylinks.html

You're going to find many of the links on these sites have gone down, BUT go to the Internet Archive Wayback Machine to find some of these old links.  Tim's site, for example, is so huge probably updating it would be a full-time job.  In the case of Story-Lovers, it's great that Jackie Baldwin set it up to stay online as long as it did after she could no longer maintain it.  For an example of using the "Wayback Machine", list member, Papa Joe is on both Tim Sheppard's site and Story-Lovers, but he no longer maintains his old Papa Joe's Traveling Storytelling Show website and his Library (something you want to see!) is gone, but using the Wayback Machine you can still see it.  At the Wayback Machine I put in his site's address, then chose 2006 since it was a later year and clicked until I reached the Library at http://www.pjtss.net/library/.

Somebody as of this writing whose stories can still be found by his website is the late Chuck Larkin - http://chucklarkin.com/stories.html.  I prefer to list these sites by their complete address so they can be found by the Wayback Machine, a.k.a. archive.org, when that becomes the only way to find them.
Posted by Lois Sprengnether Keel at 1:00 AM