Plagues and pestilences have happened throughout history.  The quote “Those who forget history are condemned to repeat it” is attributed to the American philosopher George Santayana and it can be accurately quoted as “Those who cannot remember the past are condemned to repeat it” as stated in his work, The Life of Reason: Reason in Common Sense.  I went looking for stories and, other than the very dark "Masque of the Red Death" by Edgar Allen Poe, it was interesting how little I could find and, of course, even less that was Public Domain.

I was able to find an interesting story from an area that fits the title of the Undiscovered Scotland website.  Cromarty has a landlocked harbor that had industrial factories for brewing, iron, lace, cloth, and rope until road and rail routes passed it by, leaving a conservation site and what Encyclopedia Britannica describes as "perhaps the best preserved 18th-century town in the Highlands."  Cromarty remembers its most famous citizen, Hugh Miller, with two buildings.  The National Trust for Scotland operates his birthplace, the only thatched cottage in the town, as a museum and there's also the Hugh Miller Institute which Undiscovered Scotland calls "a grand, if a little out of place, library presented to the town by the Carnegie Institute in 1903."

Hugh Miller is described by Wikipedia as "a self-taught Scottish geologist and writer, folklorist[1] and an evangelical Christian.[2]"   Let's leave his geological writings to the scientist and look at the first book he ever wrote, Scenes and Legends of the North of Scotland, or The Traditional History of Cromarty.  It's easy to picture his tale of the central part of the church-yard of the little Scottish Highland town of Nigg (current population said to be 156).  The town is small, but the Wikipedia article about it opens with:


Nigg (from the Scottish Gaelic: An Neag meaning "the notch", referring to a feature of the hills above the parish church) is a village and parish in Easter Ross, administered by The Highland Council. It lies on the north shore of the entrance to the Cromarty Firth.

The present parish church is an 18th-century building on an early Christian site dating back to at least the 8th century. The Nigg Stone, one of the most elaborate stone monuments of early medieval western Europe,[1] is preserved in a room at the west end of the church. This late 8th century Pictish cross-slab formerly stood in the churchyard, but was moved indoors for preservation in recent years.
The nearby manse is one of the oldest to survive in Scotland, dating back to the first half of the 17th century. It is now privately owned and no longer used as the parish minister's residence.
Nigg Old has its odd and curious features. In the churchyard is the Cholera Stone, dating from the cholera epidemic of 1832. One of the elders, on coming out of the church, saw a cloud of vapour hovering above the ground. He believed it to be a cloud of cholera, threw a blanket or cloth over it and placed this large stone on top to keep it from escaping. And inside the church, according to one tradition, the beadle (church officer) allowed an illicit still to be kept in the space under the pulpit.[2]

Aye, that's the Scottish tradition or folklore for you.  But Nigg is right across the bay from Miller's larger hometown of Cromarty (population 719 to 730 depending on your source) on an area called "the Black Isle."   Wikipedia's Nigg article also says:


The Nigg to Cromarty ferry route is often called The King’s Ferry – the route taken by King James IV of Scotland when on pilgrimage to the shrine of St Duthac at Tain, doing so at least 18 times in the years between 1493 to 1513.[3]
It is the only ferry service from the Black Isle. The ferry crosses the entrance to the Cromarty Firth, one of the finest natural harbours in Europe and also an area rich in wildlife and world-famous for its dolphin population.[4]

Hugh Miller was both interested in science and folklore so his book gives you a larger picture of how the protected harbor played a role in the early 19th century Cholera epidemic from quarantine to its spread, with that interesting tale of its capture in Nigg on the third page.  There's more, though and it provides some interesting incidents -- especially if you "read between the lines", so don't just skim to that third page. 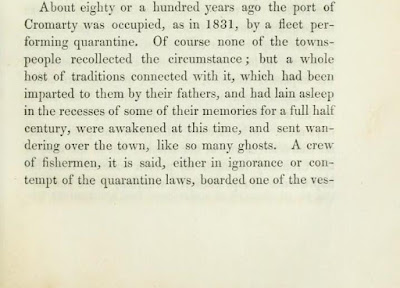 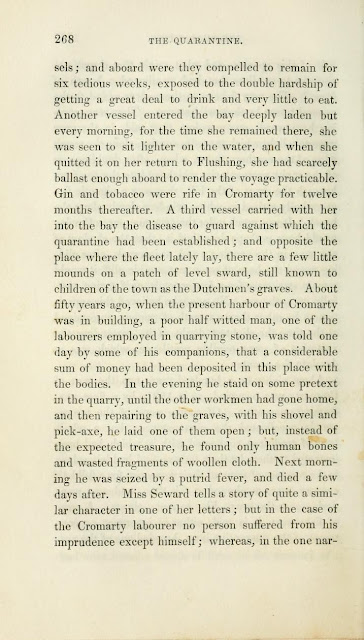 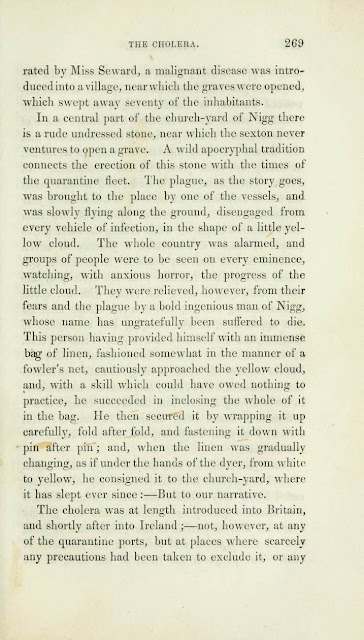 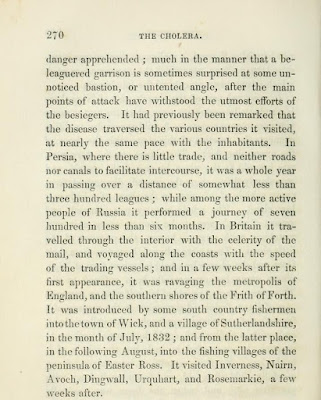 It's interesting that Persia, now called Iran, and Russia are mentioned.  This time Iran was heavily hit early because a trader apparently carried Coronavirus, Covid-19 back from China, while Russia has sealed its country off as best it could.

Would that we could somehow trap the current plague in a bag.  Until then I hope you take this bit of advice from the authors site, promo.authorsxp.com :