Ransome - Who Lived in the Skull? - Keeping the Public in Public Domain

As we enter 2021, I resolved to respond to a reaction to last year's posting of a story from Arthur Ransome's book Old Peter's Russian Tales.  Thanks, Jeannie!  Comments are moderated here, but also my email's posted here and have a page on Facebook where both this site and personal notes appear.  In the past week I read the title of a story in Ransome's book and that it was humorous.  Hmmm.  Checked the book and didn't see it.  Thought a Bear was in the title.  Looked at a short story there and believe I found it!  My book is a 1971 edition of the 1916 book. I also love his note to the 1938 edition, saying:

Fashions change in stories of adventure, but fairy stories (especially those in which there are no fairies or hardly any) live for ever, with a life of their own which depends very little on the mere editors (like me) who pass them on.

Because the illustrations in my edition are under copyright, I went to the 100% Public Domain edition on Gutenberg.org and discovered it includes illustrations, some in color, by Dmitri Mitrokin.  What it doesn't include is any difference in today's title except my edition's illustration.  The title remains the same!  I guess I'll just have to chalk it up to my memory.  That is, after all, a part of the folk process as stories travel from one storyteller to another.  (After the story I will give a modern example of the story which actually is quite sensible.)  My copy of Ransome's story opens with a horse skull illustration having a mouse atop it.  Can't give that, but will open with a photograph of a real horse skull.

WHO LIVED IN THE SKULL? 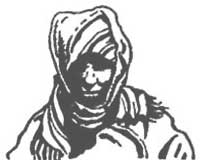 Once upon a time a horse's skull lay on the open plain. It had been picked clean by the ants, and shone white in the sunlight.

Little Burrowing Mouse came along, twirling his whiskers and looking at the world. He saw the white skull, and thought it was as good as a palace. He stood up in front of it and called out,—

No one answered, for there was no one inside.

"I will live there myself," says little Burrowing Mouse, and in he went, and set up house in the horse's skull.

Croaking Frog came along, a jump, three long strides, and a jump again.

"I am Burrowing Mouse; who are you?"

"I am Croaking Frog."

"Come in and make yourself at home."

So the frog went in, and they began to live, the two of them together.

"Burrowing Mouse and Croaking Frog. Who are you?"

So the hare put his ears down and went in, and they began to live, the three of them together.

Then the fox came running by.

"Burrowing Mouse and Croaking Frog and Hare Hide-in-the-Hill. Who are you?"

So the fox went in, and they began to live, the four of them together.

Then the wolf came prowling by, and saw the skull.

"Burrowing Mouse, and Croaking Frog, and Hare Hide-in-the-Hill, and Fox Run-about-Everywhere. Who are you?"

So the wolf went in, and they began to live, the five of them together.

And then there came along the Bear. He was very slow and very heavy.

"Burrowing Mouse, and Croaking Frog, and Hare Hide-in-the-Hill, and Fox Run-about-Everywhere, and Wolf Leap-out-of-the-Bushes. Who are you?"

And the Bear sat down on the horse's skull, and squashed the whole lot of them.

The way to tell that story is to make one hand the skull, and the fingers and thumb of the other hand the animals that go in one by one. At least that was the way old Peter told it; and when it came to the end, and the Bear came along, why, the Bear was old Peter himself, who squashed both little hands, and Vanya or Maroosia, whichever it was, all together in one big hug. 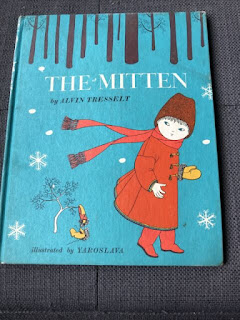 I love Ransome's note about the telling of the story!  If you are like me and know children's literature, I'm sure you right away recognized this story has appeared as a picture book.

It was both by Alvin Tresselt, with illustrations by Yaroslava, in 1964 and twenty-five years later by artist, Jan Brett in 1989, with the same title of The Mitten.  A mitten is admittedly a more believable home for several animals. YouTube also has various videos of each book if you choose to search for it there.

Whether you use your hands, a mitten, a book, or video, may you enjoy a big hug from all who have loved and told this story. 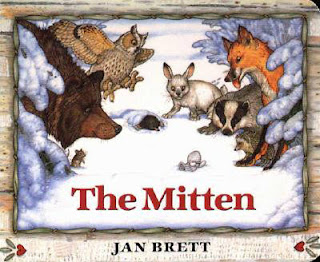