This Sunday is the offiffiffic'al start of Spring.  It's even starting to feel a bit like Spring in the metro Detroit area!  I like to say Spring is the time of year when a little hard work pays off in a lot of hard work later.  Living in an area where we sit on acreage, I'm not inclined to get overly worked up about having a beautiful lawn.  It's probably just as well for the sake of our area wildlife.  Our tractor is larger than a garden tractor, as those weren't up to the job of mowing the sections we mow.  When mowing it's common to find dirt tunnels made by moles.  If this was suburbia maybe that would bother me, but I'm able to have a "live and let live" attitude enjoying the rare sighting of their soft furry bodies.  (My dog has other ideas!)

Recently I introduced the Ukrainian folktales found in R. Nisbet Bain's Cossack Fairy Tales and Folk Tales, the only English language collection of Ukrainian folklore in Public Domain.  The story is small, like a mole, and I'm sure we could personify the "rich man" and the "poor man" having the "field in common" with current events.  I have more about moles after the story.

THE ORIGIN OF THE MOLE

Once upon a time a rich man and a poor man had a field in common, and they sowed it with the same seed at the same time. But God prospered the poor man’s labour and made his seed to grow, but the rich man’s seed did not grow. Then the rich man claimed that part of the field where the grain had sprung up, and said to the poor man, “Look now! ’tis my seed that has prospered, and not thine!” The poor man protested, but the rich man would not listen, but said to him, “If thou wilt not believe me, then, poor man, come into the field quite early to-morrow morning, before dawn, and God shall judge betwixt us.”

Then he well covered up his son with straw, and departed to his own house.

In the morning all the people assembled together and went to the field, and the rich man cried, “Speak, O God! whose field is this, the rich man’s or the poor man’s?”

But the Lord Himself was among the people gathered together there, and He said, “Listen not to that voice, for the field is verily the poor man’s.”

Then the Lord told all the people how the matter went, and then He said to the son of the rich man,

“Stay where thou art, and sit beneath the earth all thy days, so long as the sun is in the sky.”

So the rich man’s son became a mole on the spot, and that is why the mole always flies the light of day.

That reminds me of the two New Testament stories of the sower and the other about weeds.  Beyond that I found two sites about moles that might help to know more about them.  Live Science tells facts about them I find more interesting than the standard Wikipedia reference given at the start of today's blog.  For those considering them pests, MyMove.com's pest control section offers "How to Get Rid of Moles and Keep Them Away for Good."  I especially applaud their recommendations as being both non-poisonous and using household items.  Remember neighborhood cats, dogs, and other animals might eat a poisoned mole and also be affected. 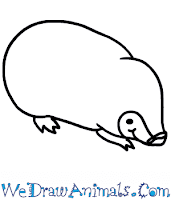 Now for something completely different (shades of Monty Python!) here's a site that's fun for drawing.  https://www.wedrawanimals.com/how-to-draw-a-cute-mole/ gives more moles than just this mole and is also worth prowling for even more easy drawing.


That site might give you other animals to draw and include when you tell stories.  I hope you feel ready to Spring into action.  It's certainly the time when animals are coming back into our neighborhoods.  Let's enjoy the transition and hope Spring really is here with all the welcome changes from Winter.