I was all set to do another installment of Keeping the Public in Public Domain, but here's a bit of additional information that came after I published the article on "Old-Time" music.  It comes from dulcimer player and lover of 19th century music, William Craig Mann, who has quite a collection of sheet music from that era.
***
He said:
You will certainly want to include in your list of potential resources three books by Dover Publications: "The Civil War Song Book," "Stephen Foster Song Book," and "Popular Songs of Nineteenth-Century America." (I know they should be underlined or italicized, but I haven't figured out how to do that from my tablet).  The last book is out of print, but the first two are available on the Dover website.  All three contain photocopies of actual original sheet music (making them primary sources), and were valuable resources to me in my research.
Another valuable book, though also out of print (but turns up regularly on Ebay) and genre-specific, is Hans Nathan's "Dan Emmett and Rise of Early Negro Minstrelsy.". It's an academic study of the life, career, and music of Daniel Decatur Emmett, composer of "Dixie's Land," "Old Dan Tucker," and a host of other gems.  Nathan included in the book and entire, BIG section of note-by-note and word-by-word transcriptions of original minstrel songs by Emmett and some of his contemporaries.  These are not specifically Civil War songs, but songs that formed the basis of popular music in America during that era.
I highly recommend these resources.

A bit later he added:


Another song book I would highly recommend is "Minstrel Songs Old and New" subtitled "A Collection of World-Wide, Famous Minstrel and Plantation Songs, Including the Most Popular of the Celebrated Foster Melodies, Arranged with Piano-Forte Accompaniment."  Yes, all that's really there!  This is not a Civil War collection, but contains the most popular songs sung by both sides during the era of the war, with a few wartime pieces like "Kingdom Coming" and "Wake Nicodemus."
The book was published by Oliver Ditson Company in the early 1880's, and is a single-volume compendium of previously-published sheet music editions of some major minstrel songs.  There are a few late songs, but the vast majority of songs are 1840's to early 1860's.  The book stayed in print until at least 1910, meaning that a tremendous number of copies was produced.  As of this moment (evening 8/17/14), there are 10 original copies for sale on Ebay.  (There is a recent reprint edition available, but the ad contains a disclaimer that the reproduction may have "missing or blurred pages" and other problems.)
If you're willing to take a lower quality original copy (more usable than collectible), you can possibly pick one up for under $30, a real bargain in my opinion.  It has not only 19th century arrangements, but actual 19th to early 20th century copies (depending on year of printing of your copy) of almost 100 period songs, including "Camptown Races," "Dixie's Land," "History of de World/Walk in de Parlor," "Jingle Bells" (yeah, it was a minstrel song), "Kingdom Coming," "Oh Susanna," "Old Dan Tucker," and a bunch of other old standards.

I thank William Craig for his suggestions.  Thought I ought to see if any of those books are online since Dover republishes public domain material.  Even if it's not online, you probably can borrow a copy through your library's interlibrary loan service.  I like to see a book before buying and borrowing is an excellent way to do it. 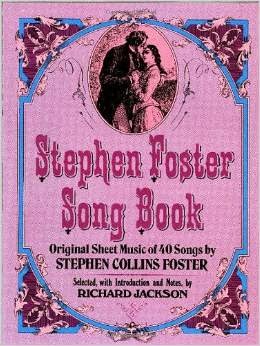 The Stephen Foster Song Book of course is by Stephen Foster, but the Dover book, besides having the sheet music for 40 original songs adds an introduction and notes by Richard Jackson, who selected the songs.  Bet you wonder what 40 songs are in the book.  It contains:
I noticed some Stephen Foster songs I expected to be in the book aren't.
Popular Songs of Nineteenth-Century America is the Dover book currently out of print, although Dover sometimes brings them back into print.  The book, however, can sometimes be found on out-of-print booksites, including my favorite, Better World Books, which does so much for literacy and also is a great resource to libraries after any book sales.  It contains a lot including some Stephen Foster songs not in the Stephen Foster Song Book. Since listing songs can be so important, here are the 64 songs for this book:
• All quiet along the Potomac tonight • Adeste fideles • Ain't I glad I got out de wilderness (down in Alabam) • America • The Arkansas traveler • Aura Lea • The battle cry of freedom • Battle hymn of the republic • Beautiful river • Ben Bolt • The blue tail fly • The bonnie blue flag • Camptown races • Carry me back to old Virginny • Champagne Charlie • Darling Nelly Gray • Der deitcher's dog • Dixie's land • Down in Alabam' • The flying trapeze • Glory, glory, Hallelujah • Goober peas • Grandfather's clock • Gwine to run all night • Home! Sweet home! • I'll take you home again, Kathleen • In the evening by the moonlight • Jim crack corn • Jingle bells • Johnny get your gun • Just before the battle, Mother • Kingdom coming • Listen to the mocking bird • The little brown jug • Long, long ago • Lorena • Marching through Georgia • Maryland, my Maryland! • My country! 'Tis of thee • My old Kentucky home • The ocean burial • Oh, dem golden slippers! • Oh my darling Clementine • Oh! Susanna • Oh where, Oh where has my little dog gone • Old black Joe • Old Dan Tucker • Old folks at home • The old oaken bucket • Old Rosin the beau • Pop goes the weasel • The prisoner's hope • Reuben and Rachel • Rock'd in the cradle of the deep • Shew! Fly, don't bother me • Silver threads among the gold • Sweet by and by • Sweet Genevieve • Tenting on the old camp ground • There is a tavern in the tavern • Tramp! Tramp! Tramp! • Vive la compagnie • Wait for the wagon • Way down upon the Swanee River • We won't go home till morning • When I saw sweet Nelly home • When Johnny comes marching home • When you and I were young, Maggie • Whispering hope • Woodman! Spare that tree! • The yellow rose of Texas • Zip Coon
PHEW!  That's a LOT!

I didn't expect minstrel songs to have as much popularity beyond reenactments, but then saw "Old Dan Tucker" in that company.  Finding "Jingle Bells" started as a minstrel song REALLY surprises me.  It's worth noticing both Dan Emmett and Rise of Early Negro Minstrelsy and Minstrel Songs Old and New have gone through more than one edition, so I may be overlooking some possible material by figuring minstrel show music was very limited.  The librarian in me says it's great that libraries can borrow from each other for me.

Program Alert:
All this talk about Civil War music was started as I look ahead to Historic Fort Wayne's annual Civil War Days on September 13 and 14 of this year.  Liberetta Lerich Green was a teenager during the war and like many a young girl still enjoyed dances and special times even though the number of boys her age or those of her slightly older brothers were reduced.  Come hear how things were here in Michigan during the Civil War . . . including the music.

UPDATE:
Comments here aren't as obvious as I might wish.  In the box at the bottom where the various tags are listed it lists the number of comments and you have to click on them.  Jerry McGaha left one worth catching:

Thank you, Jerry.  Not yet seeing the book made that something impossible to know without your comment.