Never think the Victorian era was humorless!  Now that the chaos of Christmas is winding down, it's time to see how silly it could be.  Once before, I posted a Noodlehead tale, and Lucretia Hale's Peterkin stories are prime examples of people doing the silliest things due to flawed thinking, proving common sense isn't.

As one reviewer of The Peterkin Papers said, "Before Amelia Bedelia and the Stupids there were the Peterkins."  Even a relatively simple thing like a Christmas tree shows their incredible lack of sense sure to be the "masterpiece" praised by the New York Times and why Harper's Bazaar said, "The years pass them along to every new generation, with the hint that human nature is about the same everywhere and all the time." 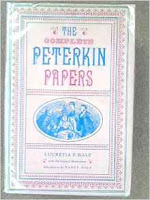 The Peterkin stories began in 1867 and appeared in magazines for nearly a decade, breaking ground by providing amusement for the young rather than the usual uplifting or instructional writing.  The subtitle, The Return of the Lady from Philadelphia, mentions a recurring character throughout the stories.  The book's title sometimes is given as The Complete Peterkin Papers, but The Last of the Peterkins, offers further tales and has a subtitle of With Others of Their Kin showing how they manage without their Philadelphia friend. 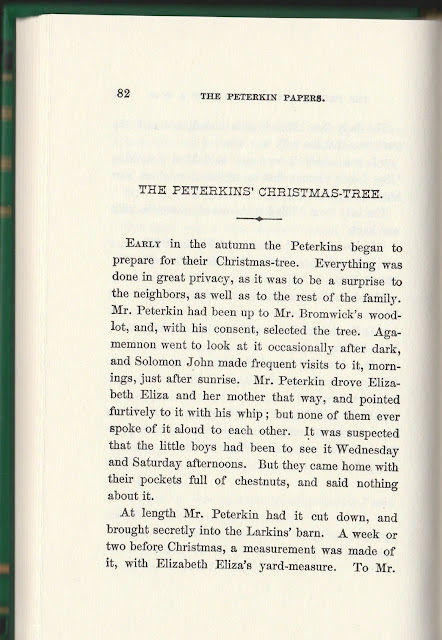 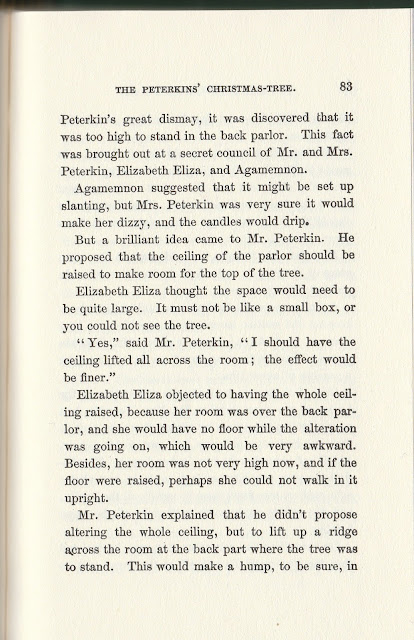 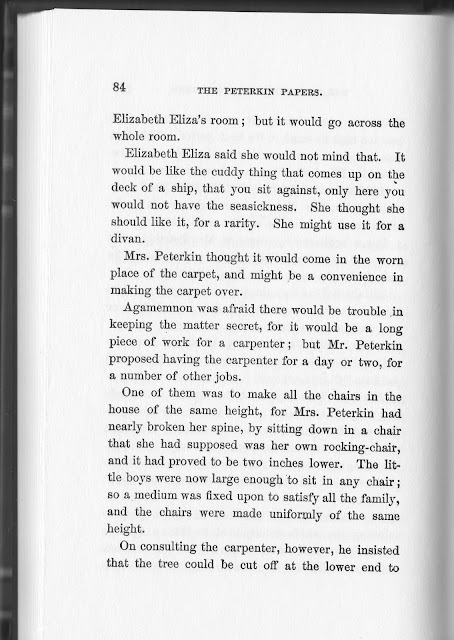 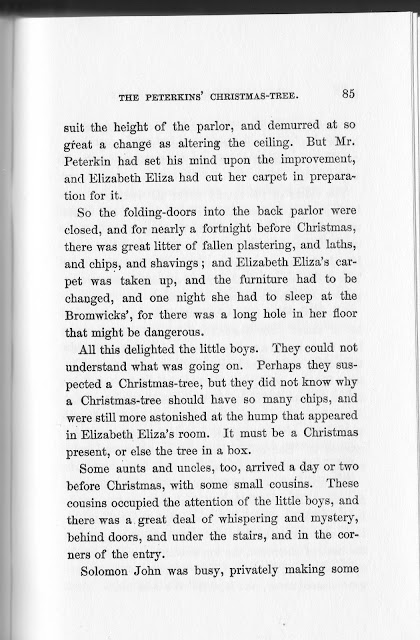 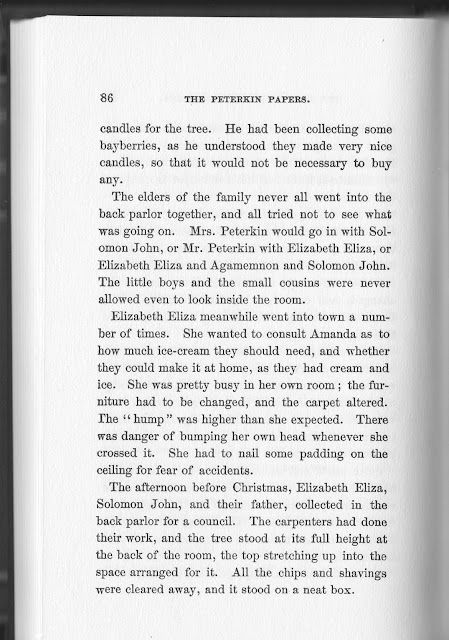 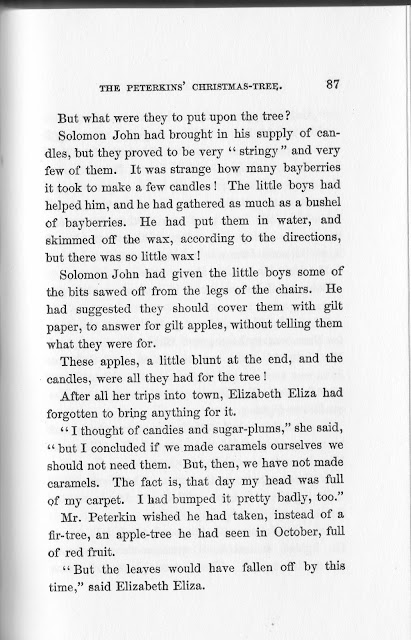 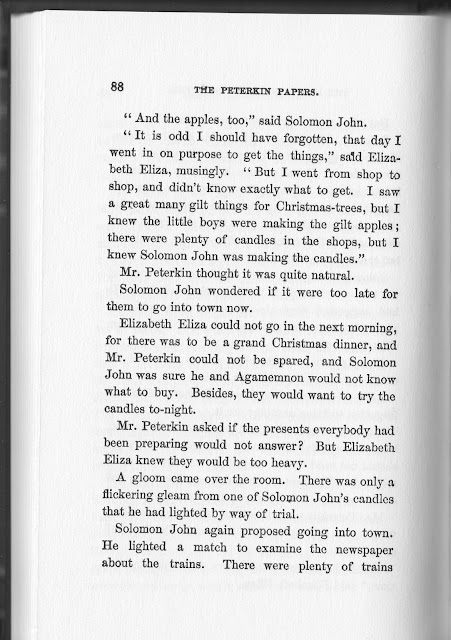 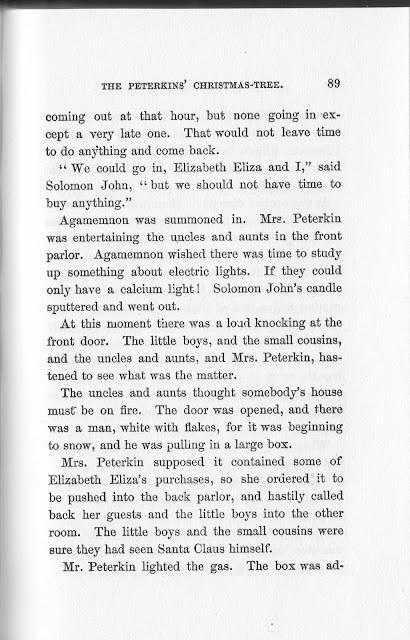 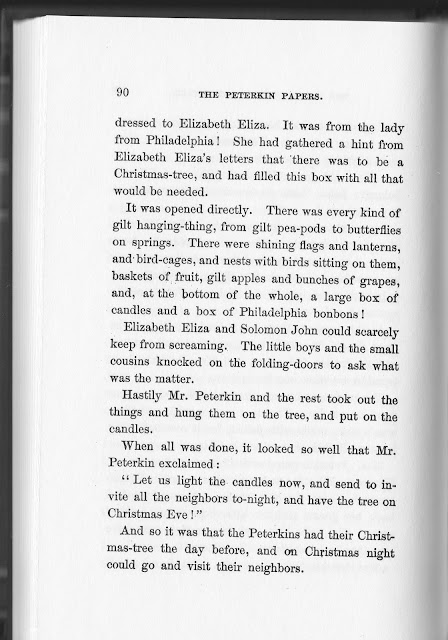 YouTube even has a LibriVox recording of The Peterkin Papers.

It was all I could do to keep information about Lucretia Peabody Hale and her family until after giving the story.  Her father, Nathan Hale, was named after his uncle, yes, the Revolutionary hero who reportedly said, "I regret that I have but one life to give for my country" before being hanged by the British.  Lucretia was one of eleven children in a literary family that continued to be important.  Her father was a lawyer and editor/owner of the Boston Daily Advertiser, while her mother, also an author, was a sister of Edward Everett, a Unitarian minister and politician. That uncle was both a United States senator and later a president of Harvard.  Lucretia's brother, Edward Everett Hale, was yet another Unitarian minister as well as a prominent abolitionist, and prolific author in his own right.  She was able to support herself with her own writing and additionally was active in charity and politics.  To be elected as the first woman member of the Boston School Committee Lucretia overcame fierce opposition from many including her brother, Charles, yet another literary Hale, who was a journalist and author. As the article in Encyclopaedia Britannica (the first hotlink in this paragraph) notes, she also produced a great many books, but her major reputation was gained from the Peterkin stories.