A Bit of Busking & Walk Arounds with Buzz


With all the computer chaos mentioned below, this is a few hours late.

The truism "It takes a computer to really screw things up" came up on Earth Day.  A teeny tiny nut went missing where my computer's monitor cable is screwed into my hard drive.  This is the reason my computer's screen has been going black intermittently and eventually refused to stay on.  That teeny tiny nut isn't an easily replaced part.  Darned if I know how it went missing. . . maybe some past time when I had my hard drive separated, but what caused it to become an intermittent problem and later a complete problem?  I don't know, but it's driven me a teeny tiny bit nuts!

UPDATE:  A new graphics card was needed to replace the ability to screw the cable in -- there should be a second teeny tiny nut inside -- BUT then the monitor went belly up.  I now am looking at a humongous 20" monitor.  My woodland scene on my desktop has way more greenery than before.  Yes, I did recycle that monitor.  As for the old graphics card, it's still in place since a cable couldn't work it.  Proof "It takes a computer to really screw things up."

There's always a way around a problem if you have the time and resources.  This is my Recycled Solution ... it's appropriate considering part of what I want to talk about.
Last week I posted about this event. 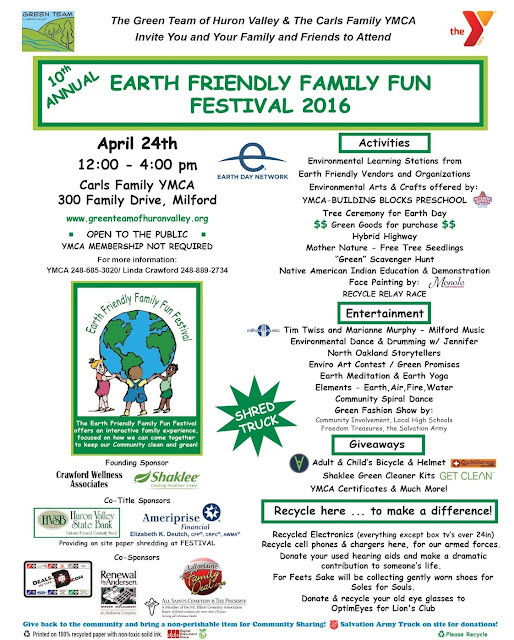 I will be telling there with North Oakland County Storytellers and at times either doing some Busking or a Walk Around with Buzz, my Puppy Puppet Sidekick. 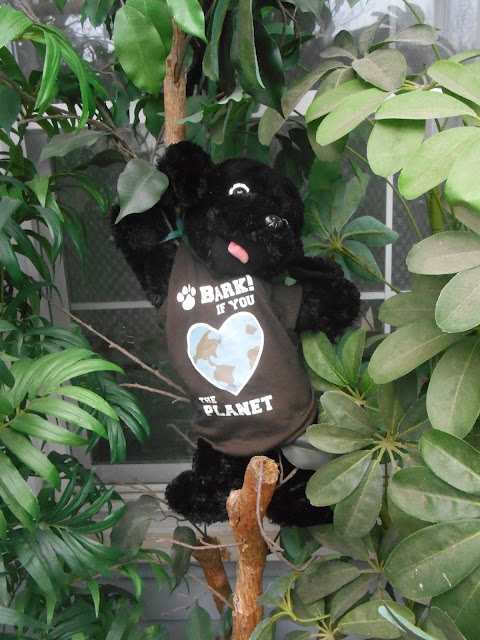 Here are some short and ecologically related stories for busking.  Well actually, like most of my busking, it's part of an event where I'm an official participant, so I won't "put out the hat" for contributions.  Also at times Buzz and I may stroll about the festival doing a "Walk Around" to let people know when the next storytelling session will be held.

I hadn't printed out my stories yet.  They're on my hard drive, not my husband's computer I borrowed for this, but it should give some good ideas.


Buzz will also be part of my workshop on Puppet Sidekicks for the coming Day of Puppetry. 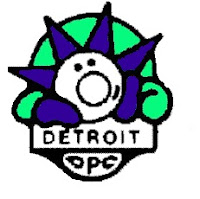 The Detroit Puppeteers Guild (DPG) will celebrate The 2016 National Day of Puppetry by offering a day-long event for adults and teens on Saturday, May 21, 2016 at the Livonia Civic Center Library.  Registration includes a performance by Kevin Frisch of Cincinnati, Ohio, featuring a variety of puppet styles, including hand puppets, marionettes, shadow puppets and black light puppetry.  Adults and teens who wish to know more about the lively art of puppetry may register for workshops and also attend a performance/workshop by the Herdsmen Puppets.

Workshop choices will include sessions on Puppet Sidekicks,  Nerf Head rod puppet construction,  and special effects for puppet theater - like fire, explosions and lighting tricks.  Other workshop offerings are "So you want to be a puppeteer?"  that will show how to create a show, make the puppets and choose your venues.  A unique puppetry workshop showing how stop motion puppets are captured in film and computer productions will be one of the choices.  A final workshop choice will demonstrate how to make and manipulate a moving mouth puppet.  Registrants for the full day may attend two of the workshops from among those offered.

At 1:00 p.m. the library and the DPG will offer a free hands-on workshop for children 5 - 11 years of age.  Participation is limited to room capacity, so pre-registration is required by calling the library at 734-466-2491.

At 2:30 p.m. the Frisch performance "Puppets Kapow!" is open to the public with $5.00 admission.  The performance is included in the full day registration.  Tickets for the general public will be available at the door starting at 2:00 p.m.

There will be a month long puppet exhibit in the atrium windows of the library preceding the Day of Puppetry.  On the day of the event, Saturday, May 21, 2016, the public is invited to shop in the Puppet Store which will be open.

* * *
Those computer "joys" continue.  "Press Release for" appears in my blog preview at the end of the D.P.G. press release, but not on the inputting side of Blogger so l would be able to  remove it.
Computers!  At any rate I hope to see you SOON storytelling -- a No Tech way to enjoy stories.