Sandburg - Wedding Procession of the Rag Doll... - Keeping the Public in Public Domain 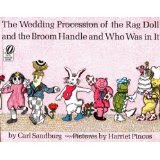 Because spring weather is by its nature indecisive, I wanted to bring my favorite story about the epitome of indecision, Carl Sandburg's "How Deep Red Roses Goes Back and Forth Between the Clock and the Looking Glass" from Rootabaga Pigeons.  Instead I'm offering a story from Rootabaga Stories, copyrighted only one year earlier as 1922 and earlier wasn't affected by an extension of copyright law forcing us to wait until January 1, 2019 for it to enter Public Domain.  It was a favorite when my daughters were picture book age and I'm sure helped one of them love words enough to become a writer.  I'll say more later about why Carl Sandburg's Rootabaga Stories is Public Domain and how the book changed copyright law after today's story, "The Wedding Procession of the Rag Doll and the Broom Handle and Who Was in It."  Then I'll tell how books entering Public Domain could become even worse.

The picture book version, illustrated by Harriet Pincus is not Public Domain, but, like the many other websites showing it, I believe the cover advertising her wonderful work is considered acceptable use.  Harcourt, Brace, and World (now HBJ as World became Jovanovich) published it in 1967.  I'll also say a bit later about Ms. Pincus, as her artwork definitely adds to the fun of Sandburg's story.

This version has the original illustrations by the Petershams.  Since there are fewer of them it probably doesn't hurt to remind you this is a poet playing with nonsense sounds for his two daughters, Spink and Skabootch (Margaret and Janet).  By the next book he dedicated it to Three Illinois Pigeons as Helga, a.k.a. Swipes, had joined them.  The girls were each five years apart in age.  Stories in both books are best enjoyed by reading them out loud! 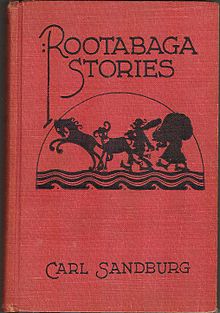 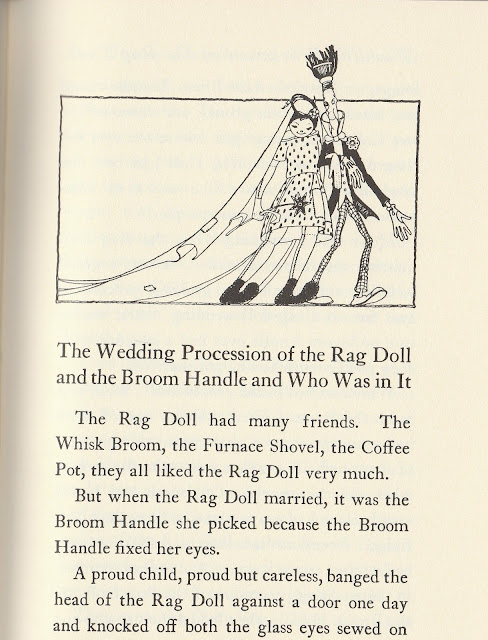 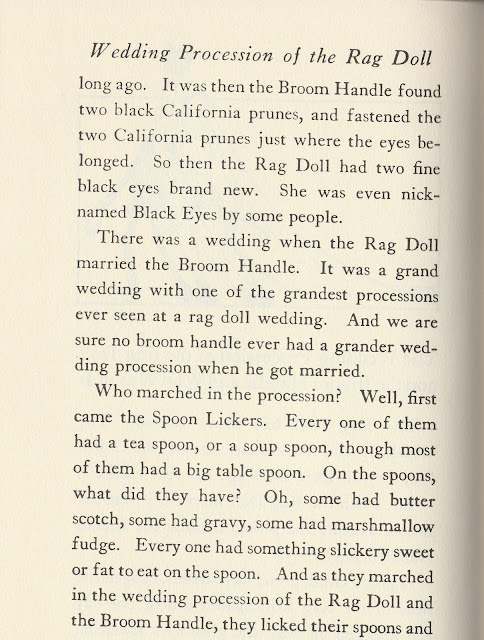 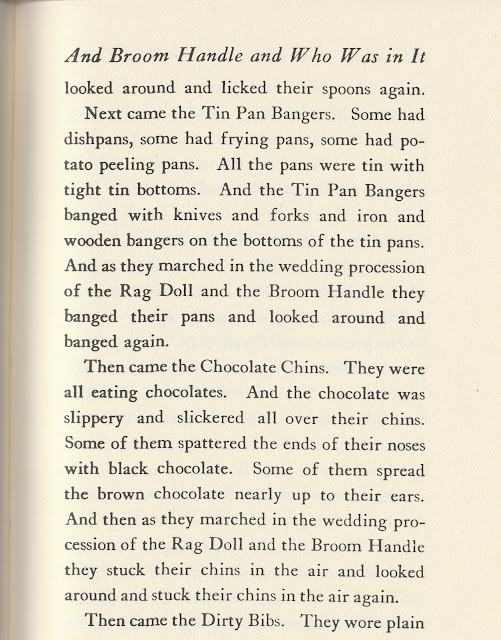 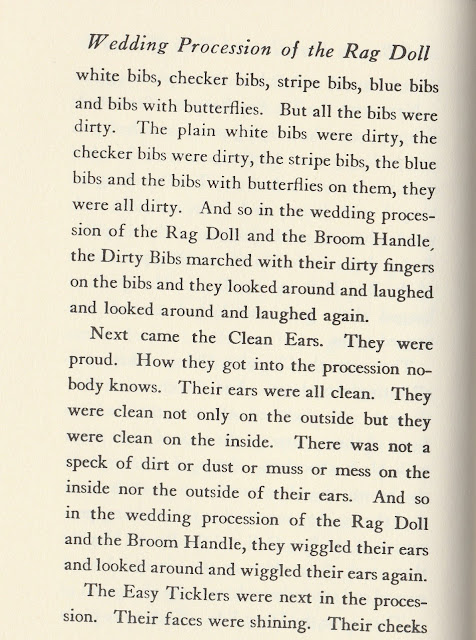 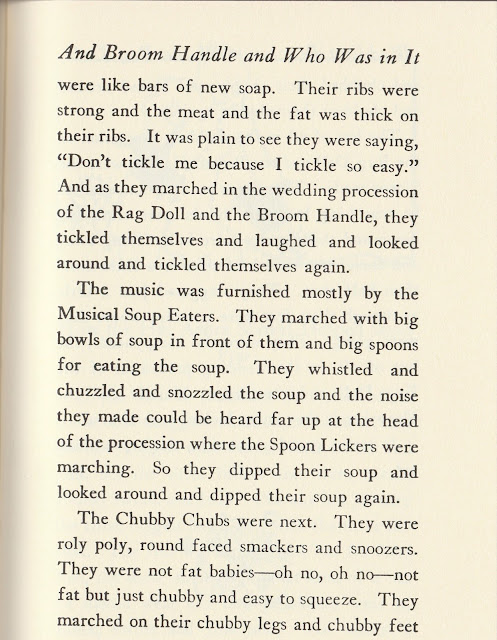 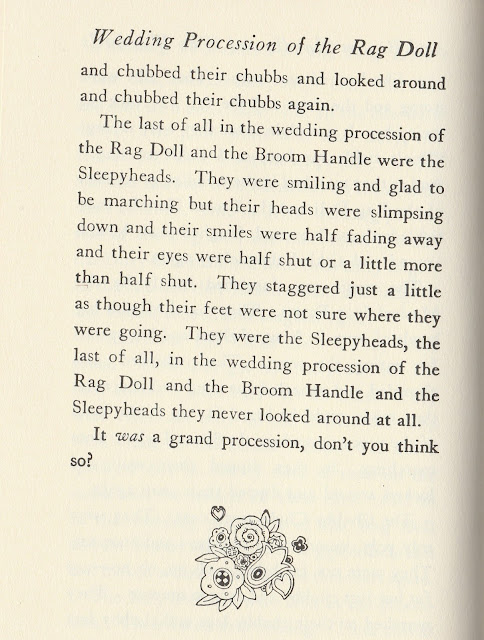 I hope you were able to picture it all, but still I want to suggest looking up the picture book version of today's story.  When I learned the artist, Harriet Pincus, was born in 1938 I knew the picture book illustrations were still in copyright, but then I learned more about her and want to mention it.  Like many artists she started young, wanting to be an artist in fourth grade, when she officially became the class artist. However when she was sixteen polio completely paralyzed her, confining her to an iron lung for two years.  Fortunately, when she was released from the hospital, her physical therapy helped her continue drawing and painting, even though she was in a wheelchair for the rest of her life.  The Wedding Procession of the Rag Doll and Broom Handle and Who Was in It was her first illustrated book and she really captured the fun of the procession.  She continued to illustrate other books, including writing and illustrating her own book, Minna and Pippin (1972).  For more about her, if you can still find a library housing the many volumes of Something About the Author, check vol. 27, pp. 164-165, although it was written before her later death from complications from her polio in 2001.

By all means look up Rootabaga Stories available from Project Gutenberg or Google.  It even includes the original illustrations by Maud and Miska Petersham. There's a Wikipedia article about it telling you how the stories were written for the poet's daughters and why he created a MidWestern land for his American Fairytales instead of the usual world of European royalty.  That article also let me know about a little known volume of Rootabaga stories called Potato Face published in 1930.

Nowhere did I find online verification of a story I heard about copyright and Sandburg causing the extension to a total of 95 years if written from 1923-63 and renewed. I was told it was to care for his disabled daughter, who must have been Janet. She died in 2001 at age 84, which means the 95 year extension would have covered her until she turned 101.  I've no objection to that coverage for an author and his immediate heirs.  The biggest problem with that change in the copyright law was learning if those works were renewed.

Unfortunately for future lovers of Public Domain, with the most recent copyright law, before Public Domain status can be confirmed, the author's date of death must be determined.  Good luck with less well known authors!  From 1978 on, the U.S. current copyright law adds 70 years from the author's death.  Carl Sandburg died in 1967 when even renewal was automatic, so all his work comes under the maximum of the 95 years from publication.  If he had been alive and had written Rootabaga Pigeons from 1978 on the copyright law would have added 70 years after his death.  That wouldn't include 1967, but if that version of the law had been in effect, it would have pushed his Public Domain to 2033.  Let's take an author dying in 1978, his works won't enter until 2048.  You can see why this is pushing Public Domain into nearly non-existence.

The current copyright law is going to see the first of those 1923-63 copyrights start to expire including Rootabaga Pigeons.  Already opposition to pushing Public Domain even further away has begun.  The most recent law is often called the Sonny Bono law or the Mickey Mouse law as Bono promoted it to keep in copyright Mickey Mouse (and many other movies and music from the first half of the twentieth century).  All  were about to enter the Public Domain.  Currently many copyrights extend more than a century.  With those 1923 titles about to enter Public Domain, once again Hollywood and the music industry are sure to work to maintain corporate copyrights.  The Washington Post has a very detailed article by Timothy B. Lee, which points out there are more books available from the 1880s than the 1980s and "the 1976 and 1998 extensions have deprived a generation of readers of easy access to books from the 1920s, 1930s, 1940s and 1950s."  (That article has numerous ads and pictures, stay with it and that quote is the end of the article.)

In the meantime many people find the issue of Public Domain confusing, so I recommend Public Domain Sherpa as your guide when you try to climb the mountainous terrain of copyright and I especially suggest their useful calculator.  As a perfect example of its value, I put in Rootabaga Pigeons fully expecting it to become available in 2018...WRONG!  It becomes available January 1, 2019 after serving its final year of being locked up.

So please keep your ears and eyes alert for this issue to return to Congress.  Hollywood and the music publishers won't easily give up income from their classic productions.
***********
This is part of a series of postings of stories under the category, "Keeping the Public in Public Domain."  The idea behind Public Domain was to preserve our cultural heritage after the authors and their immediate heirs were compensated.  I feel strongly current copyright law delays this intent on works of the 20th century.  My own library of folklore includes so many books within the Public Domain I decided to share stories from them.  I hope you enjoy discovering new stories.