Grinnell - The First Corn - Keeping the Public in Public Domain

Storytellers live by our words, so this quote is worth remembering.

Part of living by our words of gratitude should, of course, include historic gratitude to our Native Americans.  Without the Wampanoag a little outpost in Plymouth wouldn't have survived.  I went looking for even more information online about those first celebrants of Thanksgiving after hearing on Friday Archaeologists have just discovered evidence of the original 1620 Plymouth settlement.  While thinking about gratitude, it's also interesting to see roughly ten other countries feel a similar need to "express our gratitude."

Looking back to 1970 when the 350th celebration of that settlement was held, a Wampanoag leader, Wamsutta, also called Frank James, was invited to speak, but his speech was later suppressed because it was considered inflammatory by the event organizers.  This led to Wamsutta giving the speech nearby at the statue of Massasoit, leader of the Wampanoag in 1620.  In protest to the way Native American life changed starting with those Pilgrim immigrants, that speech led to the same day as Thanksgiving becoming the first National Day of Mourning.  It is an annual event which Wikipedia describes while stating their article has issues including a need for checking its neutrality and additional citations for verification.

However you view that first Thanksgiving, the archaeological investigation of the Plymouth settlement will reveal a lot about pre-colonial life.  The same article about the investigation also tells us the wild turkey, all the way down the coast to Florida, was cultivated as a food source by Native Americans.  Surely one of the other items enjoyed at that Plymouth feast was corn, a staple throughout the many native nations.  Here in Michigan I love to tell the story about Mondawmin (corn) and earlier posted Henry Rowe Schoolcraft's version of this Anishinaabe tale.  Recently I acquired a book of Twenty-Four Unusual Stories collected by Anna Cogswell Tyler.  (That link takes you to a print version or go to Loyal Books for an audio version -- they, too, are "Keeping the Public in Public Domain.)  The book is living up to its title and helped me discover a Pawnee story about their view of the origin of corn and a book by George Bird Grinnell I didn't know.

In fact I discovered Grinnell wrote way more than the three well-known and highly regarded books I have: Pawnee Hero Stories and Folk-Tales; Blackfoot Lodge Tales; and By Cheyenne Campfires.  All of those books through their retelling of stories reveal a man dedicated to keeping alive the culture of the Plains people.  His Wikipedia article link in the preceding paragraph is a typically serviceable, but dry link to information about him, but after today's story I want to give a more personal overview.  "The First Corn" came from his The Punishment of the Stingy: and other Indian Stories -- definitely a lesser known, but interesting book, found through a very long page revealing his many books listed on the Online Books Page.  That original book, as opposed to Tyler's copy, closes with footnotes to his The Story of the Indian and his The Indians of To-day.  Each of those books were written to generate public indignation over the condition of Native Americans around the turn of the twentieth century in an effort to cause reform.

There's more to be said, but let's taste the story and save the information about Grinnell for dessert. 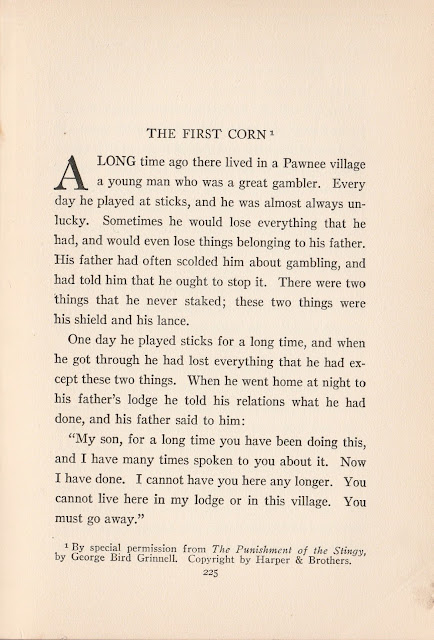 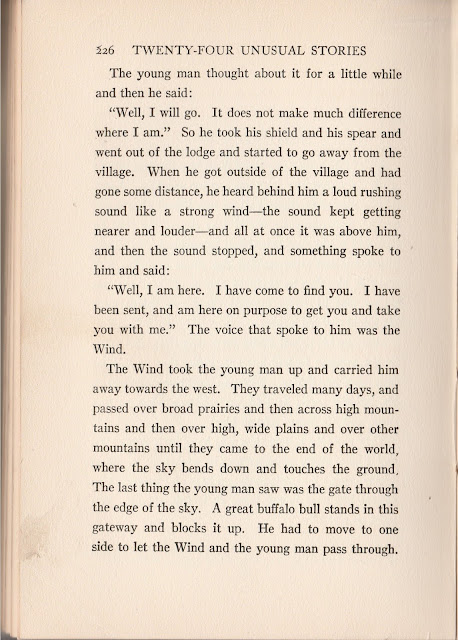 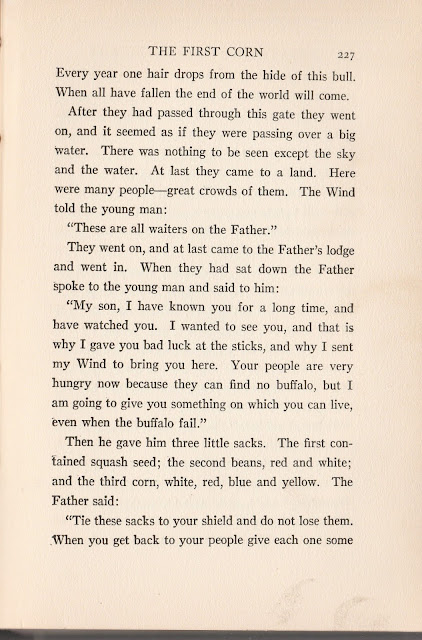 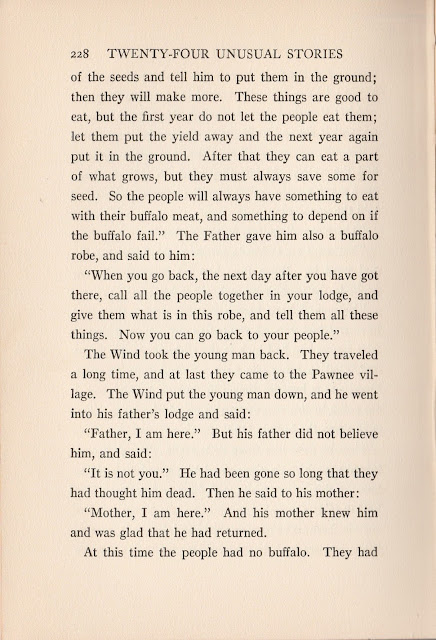 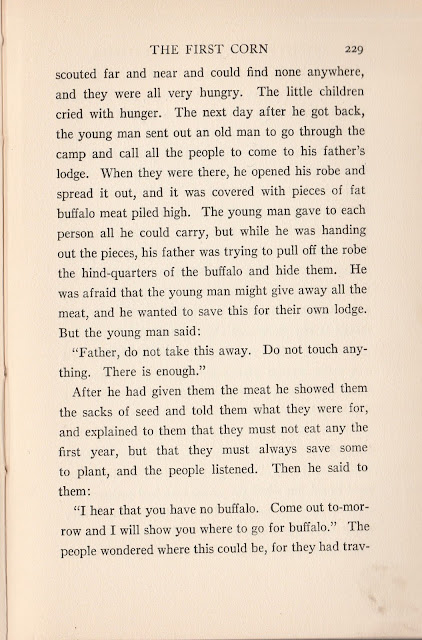 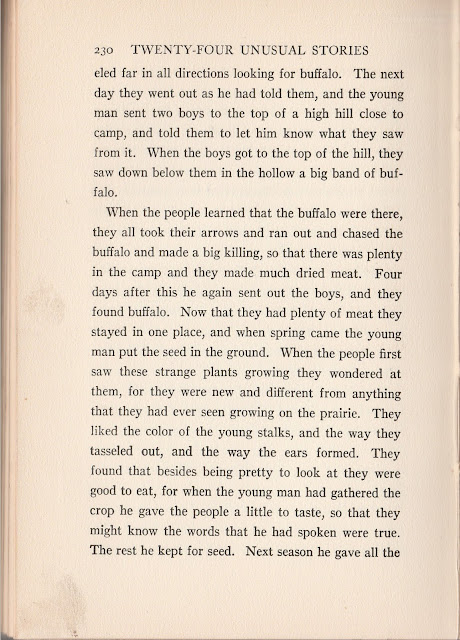 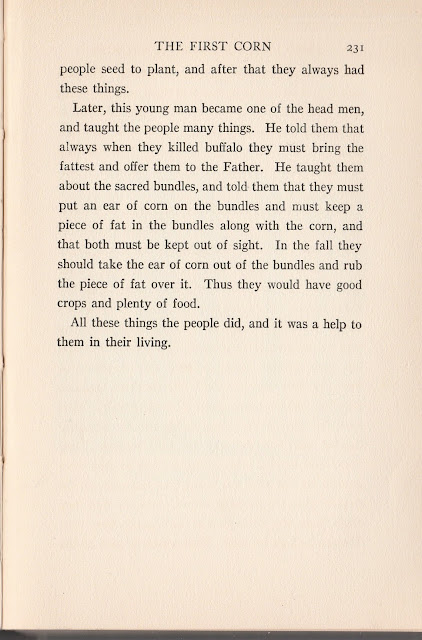 Corn was sacred to the Pawnee.  Current efforts to discover and preserve more about it continue, as seen in last year's article about "Nebraska gardeners eager to demystify Pawnee corn."

Before I talk about Grinnell, I want to include this livelier link about him.  It comes from a PBS special on the privately financed 1899 Alaska expedition of railroad magnate, Edward Henry Harriman.  Grinnell was one of many scientists and artists in a two month survey of the coast.  Names like photographer Edward Curtis, naturalists John Muir and John Burroughs are familiar enough, but the 126 passengers and crew managed to produce a critical baseline of the area with thirteen volumes of data requiring twelve years to compile.

Grinnell from his earliest years traveled among naturalists.  He and his brothers and sisters grew up playing at the Audubon estate and attending school taught by the ornithologist's widow, Lucy.  I had assumed his middle name of Bird was given to him by one of the Plains nations, but it was actually given by his parents.  The family had the resources to send him to Yale and, upon graduation in 1870, he was an assistant for the Peabody Museum which led him to a six month paleontology expedition in the "unmapped West."  Prior to that his academic career was described as mediocre, but this became the first of generally annual expeditions and a PhD in zoology.  Yet it was his interest and ability to learn from Native elders that led to his publishing and later recognition by Margaret Mead grouping him with George Catlin and Lewis Henry Morgan as "dedicated amateurs" in The Golden Age of American Anthropology.

He was indeed a publisher, joining first as an editor and ultimately having a thirty year career heading what was then Forest and Stream, but you can now find on magazine stands as Field and Stream.  Along the way he remembered his roots, founding the Audubon Society.  He was a friend and adviser to Theodore Roosevelt, supporting the National Parks Association and being instrumental in writing that led to the creation of Glacier National Park.  As a New Yorker he joined in the formation of the New York Zoological Society and he selected the site of the Bronx Zoo.

All of this could have never happened if you look at his early youthful expeditions.  In 1874 he traveled with General Custer's Expedition to the Black Hills as naturalist, forming friendships with scouts like "Lonesome" Charley Reynolds.  His friendships, however went beyond the cavalry, leading to his adoption by the Pawnee, who gave him the name of White Wolf.  His 1875 expedition was the Ludlow Expedition to Yellowstone, leading to its conservation and Ludlow's proposal to save the Black Hills for the Sioux.  Fortunately the next year Grinnell's other responsibilities kept him from traveling with Custer to Little Big Horn.  Seeing his efforts from 1895 in The Story of the Indian and The Indians of Today written first in 1900 with various editions over the years, as well as his books of stories preserving Native culture, it's possible to overlook his grating language of that period  when he talks about their difference from "civilized people."  He tried to show it was a lack of development in non-Indian ways; not inferior, but coming from a different reasoning and motive.

In view of recent events with the Standing Rock Sioux and the Dakota Pipeline, I won't try to give political views. This introduction by Grinnell to Blackfoot Lodge Tales; The Story of a Prairie People gives a clue into how he would see it. 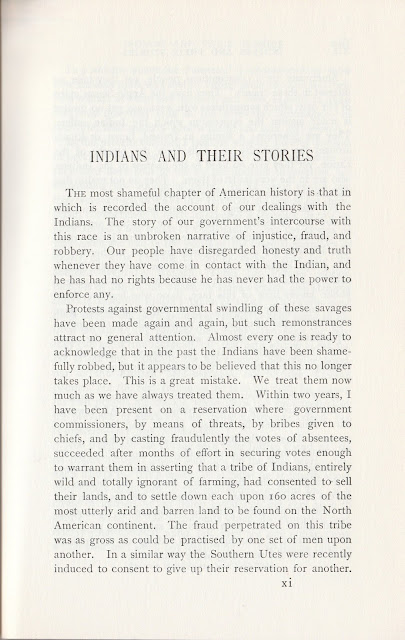 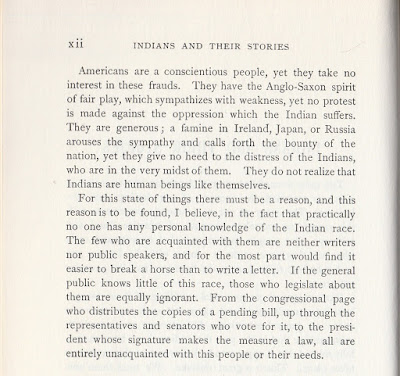 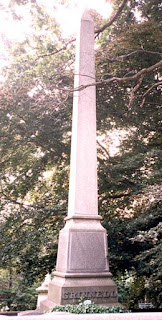 Grinnell may lie buried in his Bronx grave in Woodlawn Cemetery, but as he said in By Cheyenne Camfires, the narrator of a short story would stop at its conclusion and say, "The story is ended. Can anyone tie another to it?"  Some object and say Native American folklore has been appropriated by the non-native teller.  Back when collectors began to anthologize the stories, much was happening, including forced schooling attempting to erase that culture.  I believe the collection of stories helped preserve a valuable resource and teachings for which we all should be thankful.  As President Kennedy encouraged us, "As we express our gratitude, we must never forget that the highest appreciation is not to utter words, but to live by them."
*******************
Here's my closing for days when I have a story in Keeping the Public in Public Domain.
*****************