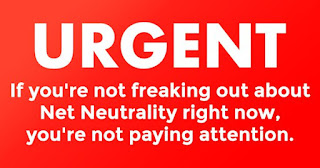 Most Americans don’t think their Internet Service Providers should be able to censor content, slow down certain websites, or shake us down for extra fees. That's why most Americans—including more than 75 percent of Republicans—support net neutrality. ( Fortune, "Americans Of All Stripes Strongly Want the FCC To Maintain Net Neutrality," December 13, 2017)

Small businesses and libraries are particularly vulnerable and, as an individual, you are, too.

It's time to mobilize public support like never before. Even though FCC Chair Ajit Pai pushed through the repeal of net neutrality rules, it hasn't begun yet and a simple majority in Congress can restore the safeguards—and, if they do, the pro-Big Cable leadership can’t stop them.  We're running out of time: Now that Pai's order is published in the Federal Register, Congress has just 60 legislative days to act.

We have a huge head start in the Senate, where Maine Republican Susan Collins has joined all 49 Democrats to oppose the FCC's order. We need just one more senator to get to 51.  Michigan's senators support net neutrality.  (My Representative, Mike Bishop, does not, but the Senate will decide this first.)  If you are in a state where your Senator might be "sitting on the fence" on this issue, please let them know you support net neutrality!  Want to know more?  Here's one of many  Net Neutrality articles that gives a good summary of how Net Neutrality may be saved.