Be sure to look all the way to the end of this post for a video I hope doesn't match me by week's end.  I can't believe all that is happening next week!  For one thing I'm in a great musical version of the movie, Sister Act.  (I start out in one scene as a Hooker under arrest.  The rest of show I'm a nun -- just can't kick the habit of an annual musical!  This show is a lot of fun and the cast and all involved have been Outstanding!  Hope to see you there -- I'll be wearing my glasses.) 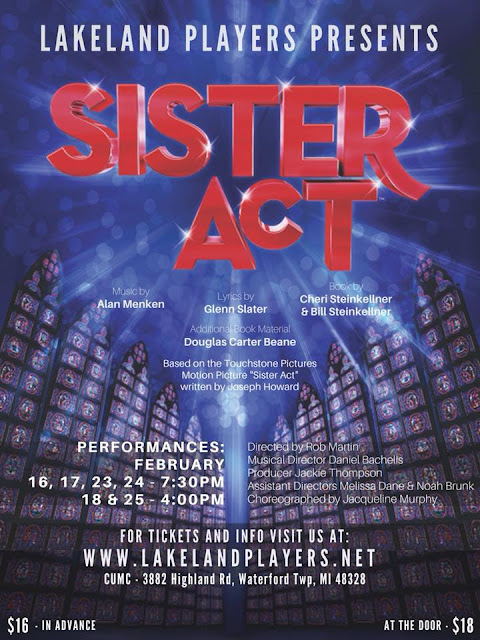 (By the way if you buy tickets, please "take my name in vain."  I don't give people a big sales job, so I never expect to be the top ticket seller, but I know this show is blessed whether the pope shows up at the end or not!)

O.k. that's one thing with the coming week of final rehearsals earning it the name of "Hell Week" among theatre friends.  Although one cast member, who also is a fine director -- had her a few years back in Aye Do! -- directs many youth theatre productions calling it "Heck Week"!!! WHATEVER!

Monday February 12 is Lincoln's Birthday, celebrated as a holiday in some states, while the whole U.S. tends to lump it together on this coming February 19 as Presidents Day to give an annual three day holiday on the third Monday in February to include our first president, Washington, born February 22, and Lincoln, and beyond.  I'll celebrate the twelfth doing one of my current six school residencies, but then on to rehearsal that night for He** Week.

Tuesday is known as either Shrove Tuesday or Fat Tuesday with Detroit metro area tending to turn Polish for a day buying up Pączki that Wikipedia link will tell you more, but I find it's pronunciation around here is Poonch-key with a "punch" to it just like I find this deep-fried jelly-filled seems to give me a punch to the stomach.  In New Orleans it's Mardi Gras time.  The idea is a last minute blow-out before Lent begins and that quick Mardi Gras link gives an international view of the day

Wednesday is both Valentines Day, which I've covered before in talking about Queen Victoria, and  Ash Wednesday.  While the religious aspect is certainly appropriate for me in Sister Act, I don't know if I'll be able to make it before any rehearsal since we must be at Central United Methodist Church -- that's the CUMC on the show flier -- by 5:30!  According to Wikipedia "Ash Wednesday is observed by many Western Christians, including Anglicans, Lutherans, Methodists, Presbyterians, Roman Catholics,[note 1] and some Baptists.[1]" Maybe they should have a service for our cast?  As for my own Valentine of a husband, I guess we'll take a day all our own.

Thursday is that Lenten time I mentioned, but Friday is also the start of Chinese New Year!  A favorite mystery author, Anne R. Tan, the author of the Raina Sun mystery series, gives a view of the Chinese American life in her books and blog.  She says in her blog this week titled "Who Stole My Tangerines":

Most people associate red envelopes and dragons with Chinese New Year. The adults give their blessings to the children in the family in the form of a red envelope filled with money. You’re not traditionally considered “an adult” until you got married. I got red envelopes during Chinese New Year until I was 30.
In my childhood, a home isn’t ready for the holiday unless it’s filled with tangerines and small chocolate gold ingots. And not just any old tangerines, they must always have the stems attached to represent good fortune and abundance.
And after praying to the ancestors, my parents would stick a diamond shape red paper on the rice tub (the paper from last year would be discarded the night before). The tub holds 50 pounds of rice, so you can guess how big that red paper is. They would also stick diamond shape red paper on all the doors, and above every entryway, so we cannot walk through the house without our ancestor’s blessings. And last, the children get to play with firecrackers in the front yard to chase away all the bad luck from the previous year.
As I write this, I realized the only tradition my husband and I kept was the red envelopes. This is pretty sad…okay, I’m off to Amazon to see if I can get red paper and firecrackers delivered in the next day or two.
This will be the start of the Year of the Dog.  Hmmmmm.  Maybe next Friday I'll be able to post a story about a dog...or a president...or a Polish story...or Lent...but try not to be like this video of a little five year-old girl who reminds me so much of my own daughters.  I can't seem to get it to be easily clicked on here, so go to YouTube and, if that link doesn't take you there, put in When you're emotionally exhausted but the show must go on,  (It's there currently four times, but all have the same little girl.)

It's worth seeing.  We've all been there, with or without HE** Week.  Next week I'll post a story as I presume I'll survive after I sub at White Lake Library on Saturday.  What a week!
Posted by Lois Sprengnether Keel at 1:00 AM