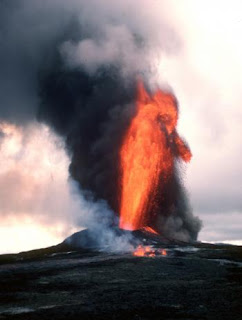 Hawaii's volcano has all the world watching with what some say could be a once in a century eruption.  For the official information, the U.S. Geological Survey has information straight from the Hawaiian Volcano Observatory or as the USGS site calls themself, "science for a changing world."  Changes have closed Volcanoes National Park indefinitely.

As a storyteller it makes me think of today's story, which I love to tell.  No, there's no volcano in it, but it certainly could be a good time to talk about them.  What there is, however, is sharks and a bit of a problem its ending caused.  After I give the story here, I want to discuss that controversy.  I will also say more about its collector and a bit related to the topic of Public Domain...the very heart beating behind my posting "Keeping the Public in Public Domain" stories here.

But first the story. 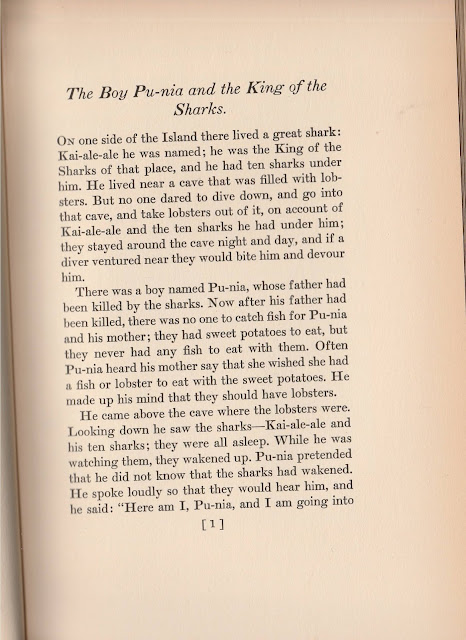 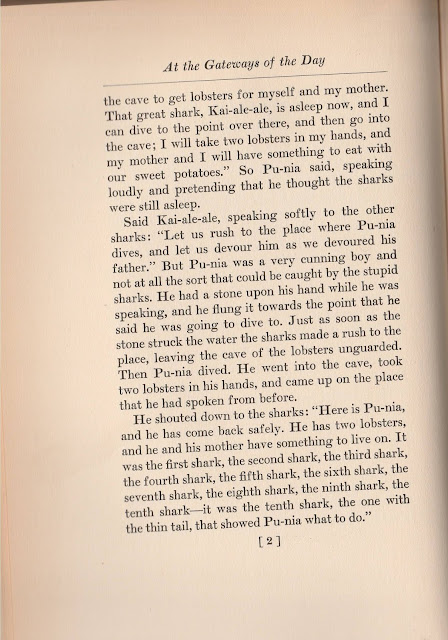 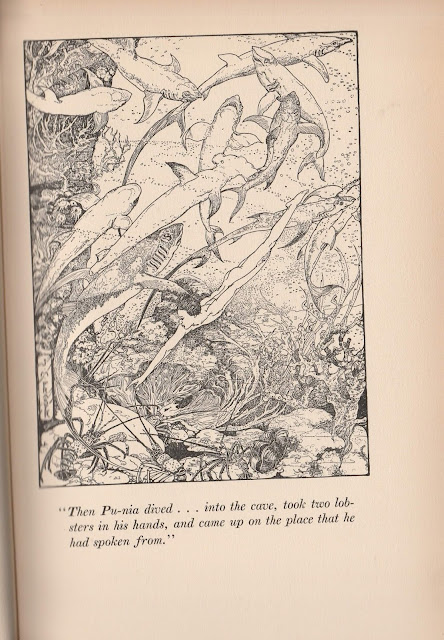 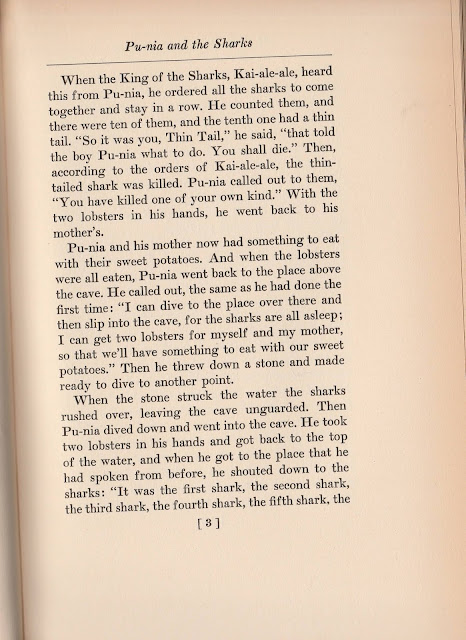 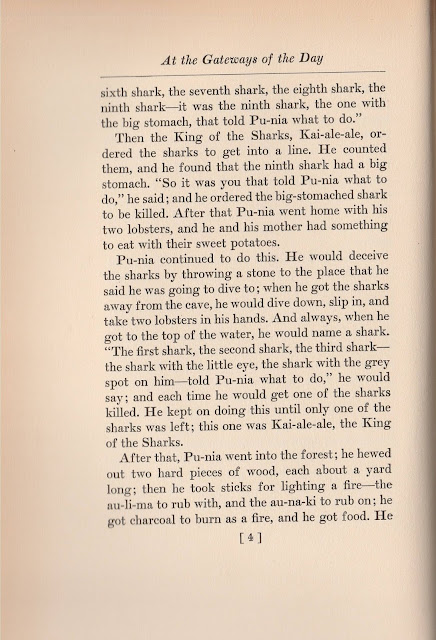 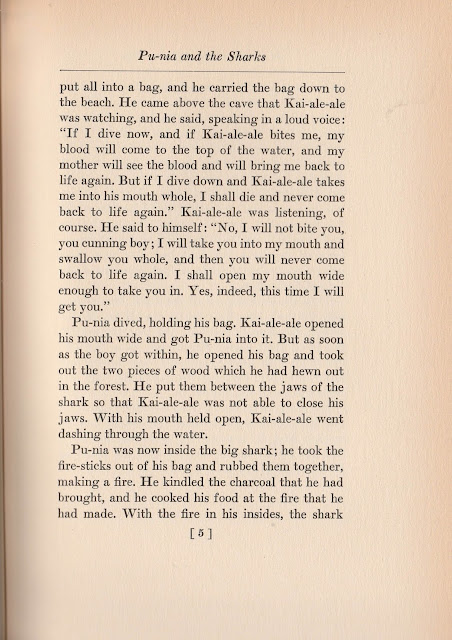 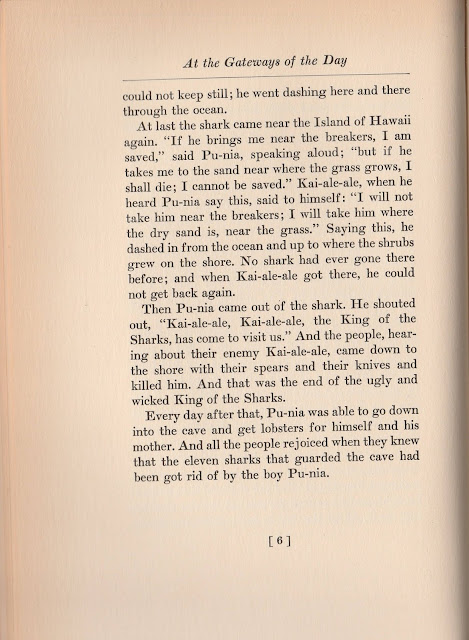 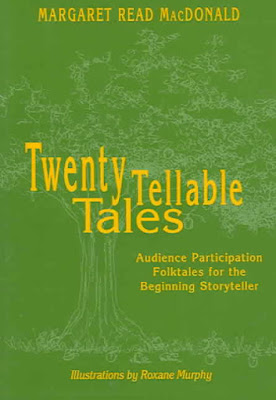 I first discovered that story through
Margaret Read MacDonald's excellent, audience participation storytelling book, Twenty Tellable Tales.  As you might expect from her folklore background, she also explained its background.  She, too, goes back to Padraic Colum, but only to his Legends of Hawaii.  That 1937 book includes this story from his earlier two volume work, Tales & Legends of Hawaii.  It's the opening story in Volume I, At the Gateways of the Day.
I mentioned on an earlier story by Colum "There are some stories by Colum put into a form of copyright limbo" -- this is because of the need for renewal 28 years after original copyright under the old law.  There is now an online database to find book renewals for 1923-1963 at Stanford and those original two volumes  were not renewed, letting them fall into public domain in the fifties.  Probably Colum's later work was simply his and his publisher, Yale University Press, repackaging nineteen of the most popular stories.  All three of those books were the result of a four month stay for the Hawaiian Legislature's Commission on Myth and Folklore and mainly was based upon the Fornander Collection of Hawaiian Antiquities and Folk-lore.  In his Introduction he notes the traditional storytellers use of gesture "makes the telling of a story a dramatic entertainment."  He also said there was no longer a school for gesture and it was being lost.

Whether gesture was lost might be debatable in watching hula dancers, but MacDonald also notices Martha Beckworth's longer version of the tale in Hawaiian Mythology with Punia in the shark ten days and eating the shark from the inside until it heads to shore (Motif F912, Victim kills swallower from within and Motif F811.4 Jonah, Fish or water monster swallows a man).  Since the story probably pre-dates the arrival of missionaries in 1820, it's interesting to read more from MacDonald on the variants on the motif through out the world.

I once told this story at a school where all classes had studied various aspects of oceanography.  I remember walking the halls and seeing the class displays of student work, including one class which obviously enjoyed sharks.  My telling of the story went along to the traditional ending. 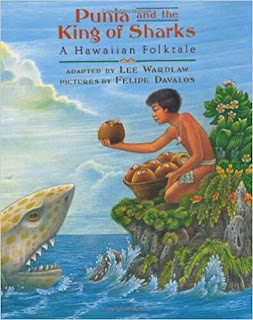 I could tell the school was polite, but I had just killed off the King of the Sharks.  (Appropriately Colum in his final notes tells us: The shark's name, Kai-ale-ale, means "Sea in great commotion.")  The program went on and was well enough received, but the ending now troubled me.  It continued to trouble me until 1997 when Lee Wardlaw produced a picture book version.  In her book's adaptation the ending has Punia not only outsmart the shark, but let him go free with the warning that, if the shark returns, Punia will let all the ocean creatures know how he was outsmarted!

I asked my fellow storytellers what they thought of my stopping the story at the end and giving my audience the choice of endings.  They felt I needed to tell the story with my ending chosen.

I don't.  I don't ask the audience to vote, merely in their own mind decide if King Kai-ale-ale is killed, as is traditionally told, or if Punia outsmarted him once again and the shark leaves in disgrace.  I don't ask the audience to tell anyone else, but explain their ending is their version of how story ends for them.  Wardlaw is a teacher as well as award-winning author of over 20 books (yes, this book, has a few awards) and, as a result, I'm sure she understands the problem with the traditional ending.  Like any good educator she offers a teacher's guide.  I like that, among Language Arts activities, it suggests: As a class, write your own adventure where you outsmart another animal.  How would you outsmart a bear, snake or lion?  What would you use to trick them like Punia did?

On Amazon I see yet another version by Beverly Moffett Mohan and a different Study Guide for Wardlaw's book.

Now what's your version?  (As I tell my audiences: Only you need to know.)