Fielde - A Dreadful Boar - Keeping the Public in Public Domain 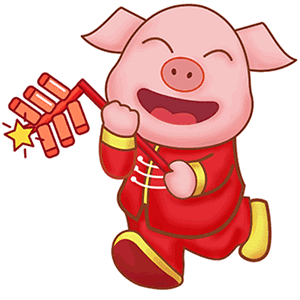 Back at the end of 2018 I celebrated the regular New Year with a story, "Misapplied Wit", by today's author, Adele M. Fielde taking place during the New Year celebration.  I foolishly said "Stories about the New Year aren't plentiful.  This Chinese story mentions the New Year and I probably should save it for Chinese New Year, but you can always celebrate that with whatever celestial animal is the topic."

There are indeed lots of stories about pigs, but I wanted a Chinese story since this coming week is the start of the Chinese Lunar Year with all its celebrating and this year dedicated to the pig, or to be more precise the Brown Earth Pig, which also happens to be female.  Hunh?  To learn more than you probably want to know go to Chinese Fortune Calendar and wallow in the information.  That site has quite a bit to say about the coming lunar year and its timing, but the characteristics of the Pig are what I found most interesting.


Pig is the last animal sign of 12 Earthly Branches. Pig is in the Water group according to Chinese Five Element theory. Water is related to wisdom. Pig is connected to river or running water. Pig has wisdom, initiative and energy. Pig is not lazy. Pig Month is November, the first month of the winter. So Pig is the cold water in the winter. In Chinese I-Ching, Water is connected to the danger. When river water is overflowing, it might cause flooding. The sign of Pig is offensive and encroachment. Pig contains mainly Yang Water with some Yang Wood. Yang Wood is related to tall tree, landmark, boss or leader. The characteristics of Pig are kind, generous, magnanimous, warm-hearted and considerate with Leadership skill.

I have to say stories about pigs or even wild boars (today's story) are very hard to find in English stories with one notable exception.  At the risk of being a Bore, I'm going to talk about that exception after today's story.  In the same book as "Misapplied Wit", Chinese Fairy Tales, also known in an earlier edition as Chinese Nights' Entertainment, Fielde has a wild boar (with an "a") cause all manner of grief to a little old Chinese grandmother.  The old lady's crying shows what can happen if you keep asking for help.  The chaos that follows has been told in many forms in other cultures, but this version does it most thoroughly. 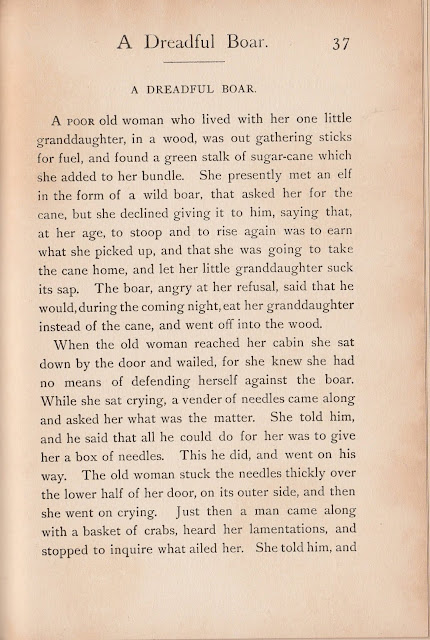 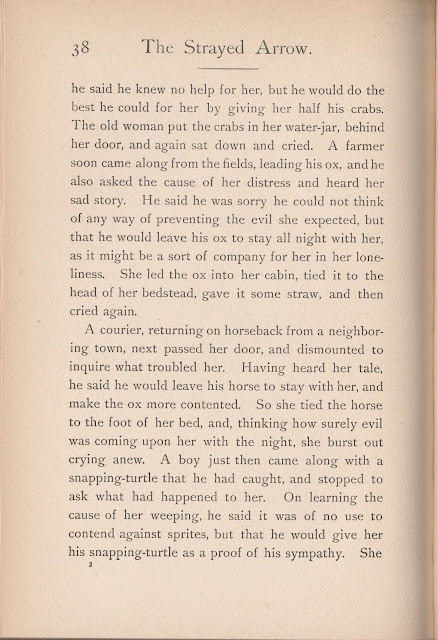 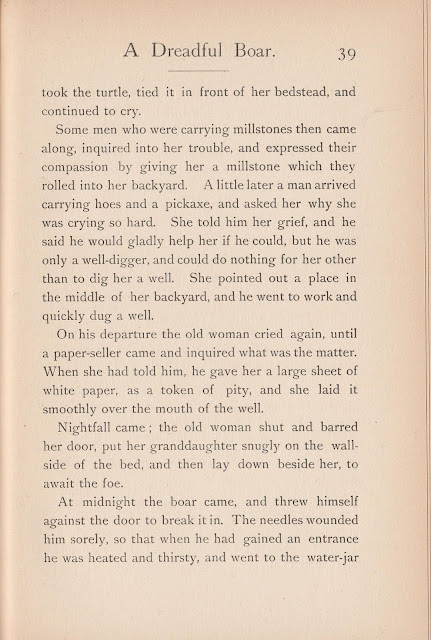 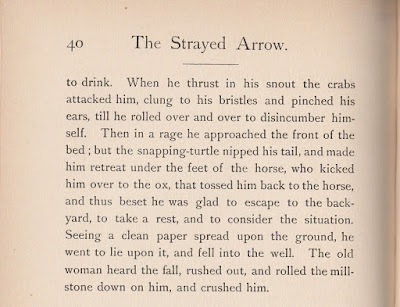 It's commonly said there's "no use crying over spilled milk", but that old lady's tears were certainly worth crying.  O.k. she didn't get a Boar's Head dinner, but neither was her granddaughter Boar's dinner.

Now at the risk of boring you if you've never heard of the 16th century Chinese folk novel, Monkey or by its other name of Journey to the West, there is a famous Chinese pig character I would have liked to bring here.  Pigsy is a fellow traveler with Monkey in Wu Cheng 'en's folk novel, which has many translations, most notably by Arthur Waley, who abridged it mainly by omitting the poetry, leaving 30 of the 100 original episodes.  The name, Pigsy, is one of Waley's several renamings of the main characters.  As the study guide for Monkey:A Folk Novel of China, Gradesaver, says "It has been adapted numerous times -- in film, plays, anime, etc." 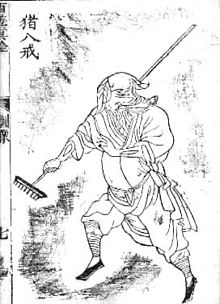 Gradesaver describes Pigsy as: Originally a marshal of the Heavenly armies, Pigsy was sent by Buddha to wait for Tripitaka and his disciples, and disguised himself as the wife of Blue Orchid. Rather unintelligent, upon his reincarnation, Pigsy accidentally took the wrong road and entered the womb of a sow, giving him his distinctive appearance. His weapon of choice is a nine-toothed rake; in addition, Pigsy can ride clouds, perform 36 transformations, and has a voracious appetite. He is also relentlessly teased by Monkey and seeks to revenge himself on these small offenses – but all of his plans backfire in some way.


In the end, Pigsy is also promoted to the status of Cleaner of Altars, which will give him the opportunity to eat all the offerings left by worshippers but not eaten by deities -- the perfect job for him. He is seen as accepting and optimistic, but rather pig-like in his lust, gluttony, and laziness.

Gradesaver also calls both Pigsy and another character, Sandy, "extensive dramatic irony in Monkey in the misunderstandings that occur between the four travelers and those who are there to help them, but appear to be monsters at first. "   For a slightly more earthy description of how he became a pig, and his bad behavior, go to Wikepedia's article on Journey to the West.  There are copies available at Internet Archive, some even in English, showing some of the range of versions.

Why am I mentioning all of this?  No, it's not today's story as I haven't found an English language version yet in Public Domain, but know graphic novels and Beijing Folk Opera productions loaded with fantastic gymnastics have brought this famous Chinese pig who traveled with Monkey plenty of attention.  I hope you also travel to see a performance of it sometime -- whatever lunar year it is. 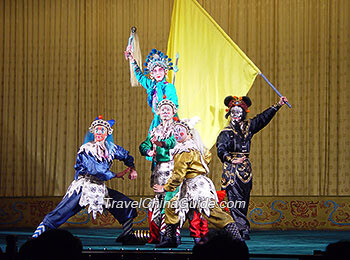