High Times in the Dry Times

It's been a good month for fun on the road.  More will still happen, but not almost non-stop, as I've been doing.  Earlier this year I began work on a major historical program looking at Michigan's role during Prohibition, including its two year headstart that got residents thinking of "High Times in the Dry Times."  (You're not seeing double, I start the program as a 1938 reporter looking back twenty years, then step behind the screen to become a flapper revealing even more about the era.  Twenty-first century technology gives a look at both parts of the program.) 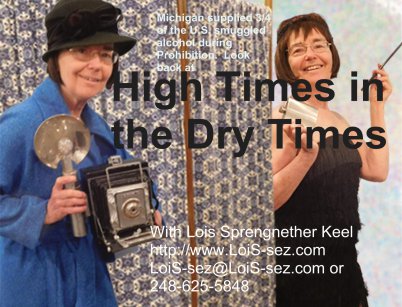 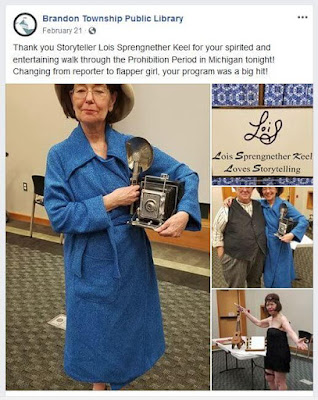 I did a very well received preview of the program at Brandon Township Public Library.  This is their Facebook posting about how it went. Next week I will also preview it at a nearby senior residence.  There's been so much happening I had put it aside, but now need to return and feel comfortable with the program being set exactly the way I want it.

To do that, I want to perform it a bit more before promoting it for autumn.  (The program already has a regular booking for early October.)  This is a great opportunity for a free program, for groups seeking a budget historical program with music and audience participation.

The lack of lead time during the summer months for promoting the preview makes it perfect for groups with an existing audience.  Now that I'm able to focus on it, I'm really looking forward to bringing this program to Michigan audiences.
Posted by Lois Sprengnether Keel at 1:00 AM

Email ThisBlogThis!Share to TwitterShare to FacebookShare to Pinterest
Labels: Prohibition