Richards - The Grave Diggers - Keeping the Public in Public Domain

Today's story is very brief, typical of fables, so I want to mention a bit about the author, Laura E. Richards.  Just open that link and discover her over 90 books, many of which are available through Project Gutenberg and Internet Archive, including her 1917 Pulitzer Prize winner about her mother, Julia Ward Howe, 1819-1910 which she co-authored with her sisters.  Sounds serious doesn't it?  Then I learned she was the author of a nonsense poem that was one of the first things I ever memorized, "Eletelephony."

I remember her name from grade school speech contests where a common bit of oratory was her story of "The Golden Windows."  That link calls it part morality-tale, philosophy and science lesson, rolled into one "gem" of a story! Featured in Ms. Richards' book The Pig Brother and Other Fables and Stories (1881). The collection is "a supplemental reader for the fourth school year."

Notice the book where it originated is The Pig Brother and Other Fables and Stories.  With a title like that you might want to check it out at Project Gutenberg and don't let the "fourth school year" stop you as "The Golden Windows" webpage recommends it even for Middle School and I've found her fables and stories have enough to challenge adults, too.
Many of her books are for children, but I bought the book it was called The Golden Windows.  It actually is two books as the second book, The Silver Crown, is where today's story appears.  (The title stories open each book.)  It's worth noting the book's subtitle, A Book of Fables for Old and Young.
Don't be misled, today's story isn't light nor are there talking or otherwise anthropomorphic animals.  It's a fable, which means it's a teaching story, a format Richards used frequently.  Something worth noting is she does not give a moral or any other obvious lesson at the end of her fables.  She believes you will get from it what you need to know.
Here's her story and then I'll mention a bit about what drew me to this story. 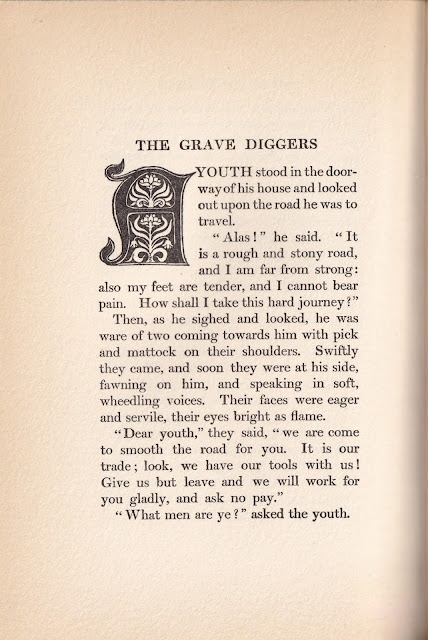 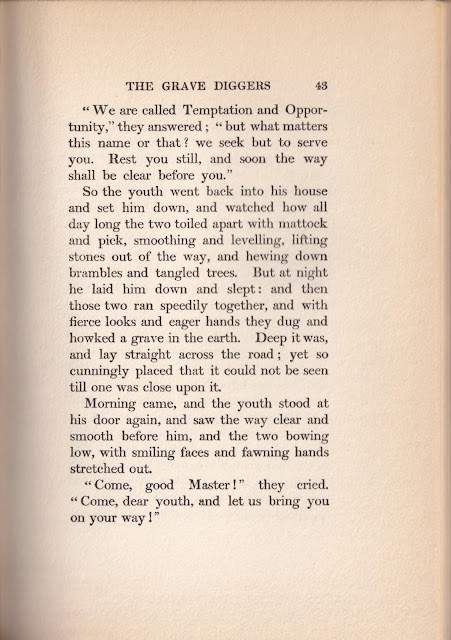 Aside from the fact that the recent high infection rate of Covid-19 from colleges and universities seems to show this story is still happening, I've had extra reason to think about the stories contained in graves lately.  My local township, Springfield, has offered two excellent self-guided cemetery tours in connection with Springfield Township Library.  I'm not sure if the earlier tour of the Davisburg Cemetery will still be up.  It was a really well-done self-conducted cemetery walk & I contacted the Parks & Recreation department for a copy as I was unable to do it during the time they scheduled it.  Fortunately it was still up, so my dog & I had a far easier time since the highlighted graves were easier to find.
The Da 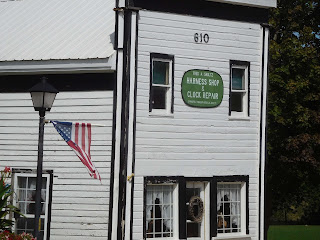 visburg Cemetery tour explained an odd combination of businesses in a building in town.
It's  the town's harness, watch/clock repair and barber shop.  It's now the township historical society building.  The tour shows a photo of Fred Schultz , barbering, and he also was a cobbler, to add to the mix.  The building was also living quarters for most of his life.
Others on the tour include Revolutionary War and War of 1812 soldier, Solomon Jones.  There are many Civil War veterans.  The tour ends with the appropriately soldier named Tank, who was in WWI.  Of course there are tons of farm families.  I'd walked the place before, but this made it so much more interesting.  I especially enjoyed Lulu Gillies and appreciate how this widow became a successful business owner & milliner drawing people to the tiny "burg" by train for her fabulous hats.  The mystery of  Doctor Hall went through three trials, including the state Supreme Court.  Bet the town was buzzing with gossip for the early 1880s.  The joys of small towns.

They'll be doing another self-tour at the cemetery nearer to here.  I found a few bits of information in the Davisburg walk I used this past Sunday where I was one of the guides for the Oak Hill Cemetery tours in Pontiac. I loved that it was Prohibition related.  We had, among others, a cornet player who was a rumrunner.  People used to gather outside his jail cell to hear him play. 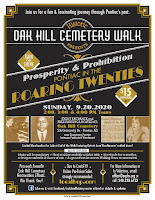 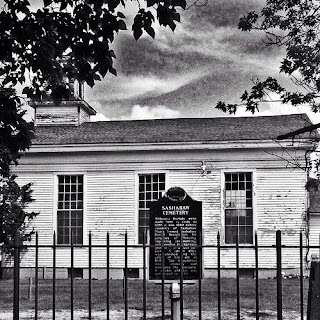 Guess you could say things have been a bit dead around here.