Have you ever thought about Velcro and how it was invented?

Today's story and a personal experience sent me thinking about this. 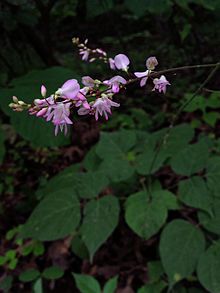 My "Roadie", my husband, has been in the hospital, so one night I had to walk our "Malamutt" (Husky/Malamute now a breed being called an Alaskan Husky) with a flash light.  Days are getting shorter and we'll surely do more, but hopefully without the "natural Velcro" of burs.  (The word is also burr.)  That Wikipedia link tells, among other things, how Velcro "was the inspiration for hook and loop fastener, also known as Velcro."  I tried to stay on an actual path, although I knew my dog would visit the edges of all trails and possibly have burs.  My fleece cape, however, became so fastened with tiny burs that my thoughts went to Velcro.  (The dog actually only had a few on his plume of a malamute tail!)

This article about "Plants with Burrs" says "Some burrs are so small as to be nearly unnoticeable, while others are large enough to result in a flat tire."  Mine were tiny and a nearby nature trail pointed out what type of bur they might be.  The photo shows a flower that's prettier than what now remains on trails & it has many common  names boiling down to Tick Trefoil (Hylodesmum glutinosum for those wanting the scientific name).  In daylight I can watch out for it, although it's fairly unassuming unlike larger burs.

This got me thinking about stories where something acts like a bur.  The closest to actual folklore on burs that I found was in James Mooney's Myths of the Cherokee. 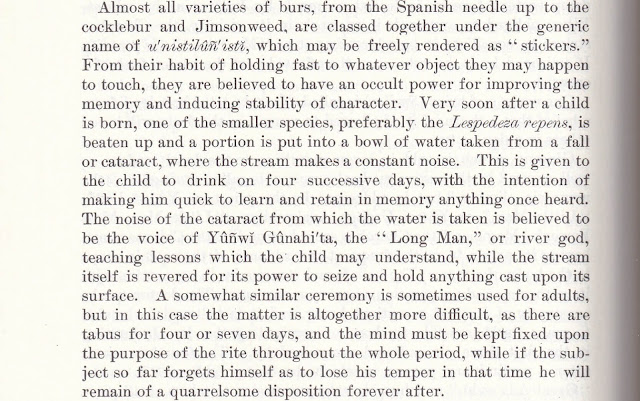 I certainly don't have the memory of a bur, nor would I want to risk any problems.  That sent me further to Asian stories.  I recalled Elizabeth Scofield's title story from Hold Tight, Stick Tight: A Collection of Japanese Folk Tales where a voice calls "Hold tight or stick tight." An old man answers "Whatever you like" and gold pieces fly and stick to him.  When his greedy neighbor tries it, he winds up covered in tar.  To make matters even worse, the neighbor's wife drops a candle setting him on fire.  The book is still in copyright, but I decided to look at my various Japanese anthologies in Public Domain.  I didn't find that story, but one that again has many of the same elements.  The greedy neighbor trying to get the same "reward" and instead being punished is very common in Asian tales and I'll briefly give a Chinese version I love to tell after today's story.

Before starting I should probably explain what a "wen" is.  It's defined as "A harmless cyst, especially on the scalp or face, containing the fatty secretion of a sebaceous gland."  (A variety of online dictionaries say essentially the same thing.) 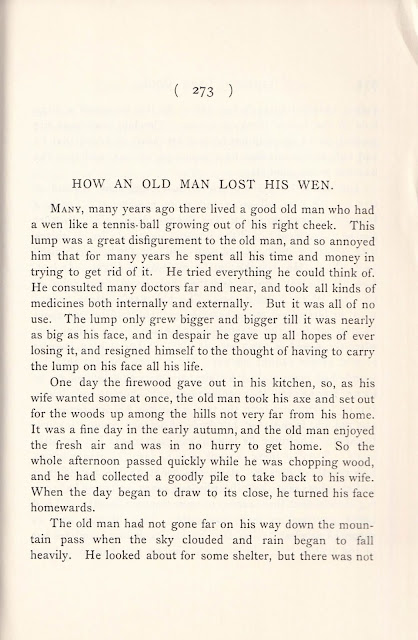 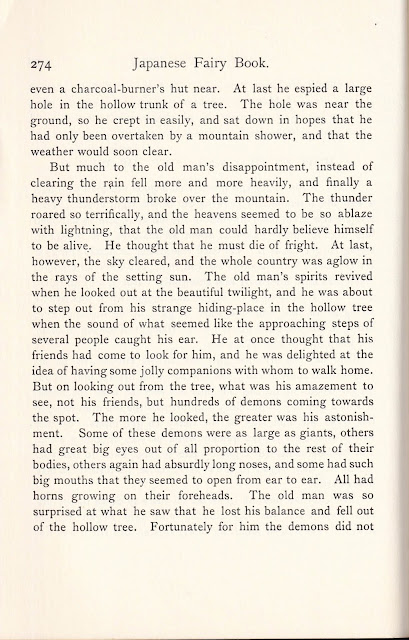 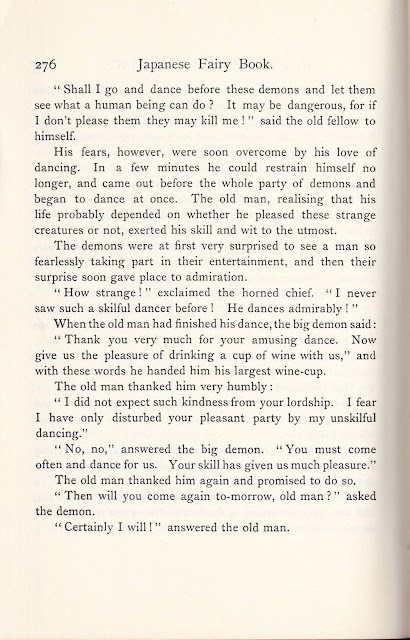 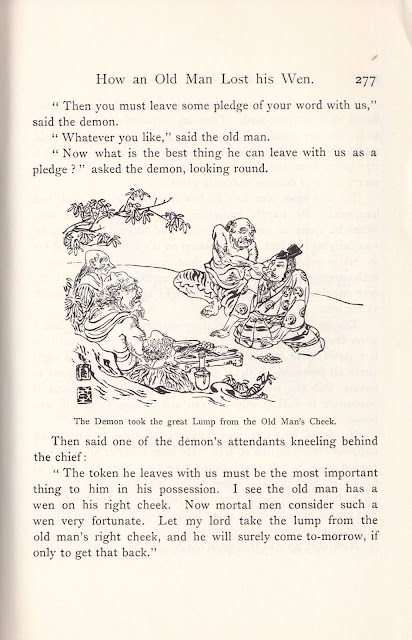 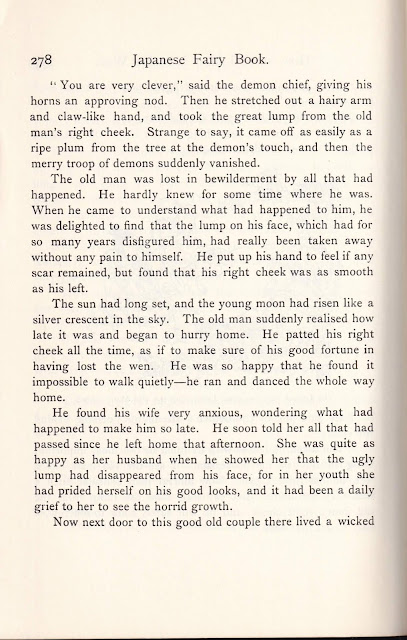 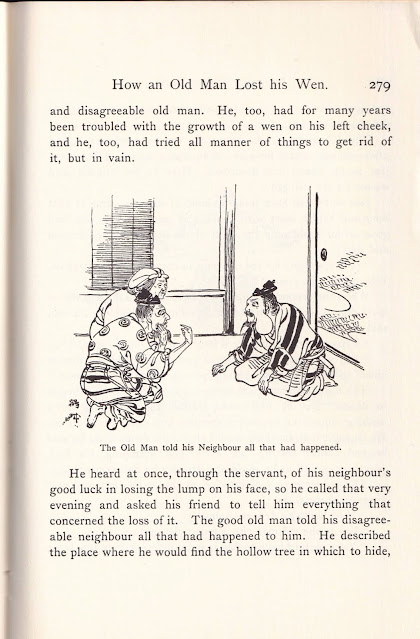 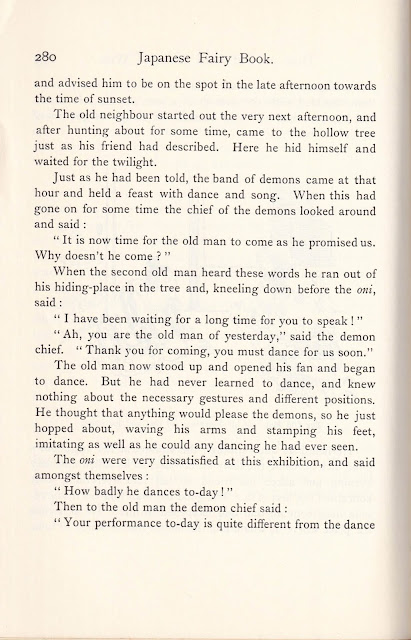 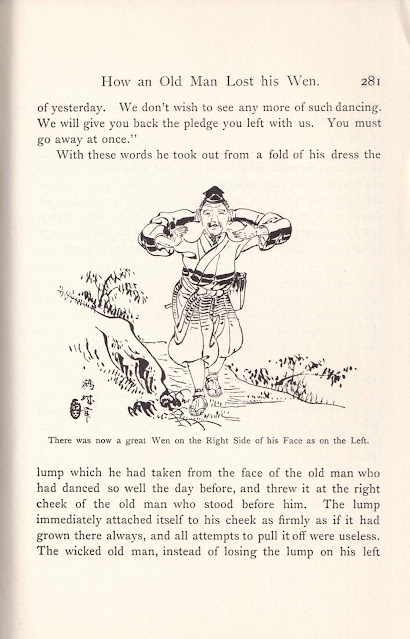 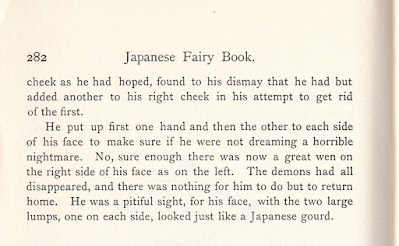 That's from Yei Theodora Ozaki, a surprisingly modern woman for a woman of the late 19th and early 20th century.  Her childhood was in Japan, but her life was both in Europe and Japan, she earned her own living, and an interesting postal confusion over her name resulted in her marrying the Japanese politician, Yukio Ozaki.  The book where this originated has two names, but Project Gutenberg's copy of Japanese Fairy Tales is the 1908 version and says it is "Profusely Illustrated by Japanese Artists", while my 1903 Japanese Fairy Book in the Preface says "The pictures were drawn by Mr. Kakuzo Fujiyama, a Tokio artist."

I mentioned this story has many similar stories in Japan and beyond in Asia.  While I have enjoyed telling this, I also love telling a Chinese variant called "Candy Man" where a brother carrying syrup falls, is coated with the syrup and at the mercy of goblins.  He escapes with their magic drum which produces food.  His brother tries for similar fortune only to have the goblins give a nose so long the greedy brother must carry it over his arm to avoid tripping.  The greedy brother's wife asks for help from her brother-in-law, who learns the drum can also shrink the nose.  The wife's impatience results in her husband's nose disappearing into his face, the drum breaks and he was left without a nose.  Aside from various humorous moments in the story, it once again is a tale of the greedy getting what they deserve.

I believe there's a prayer asking God's mercy and not what we deserve.  May it be true at this time when we all could use a bit of humor and mercy instead of what we deserve.