Harper - The Gunniwolf - Keeping the Public in Public Domain

Normally I'd have posted a scary story every week in October.  This year I just didn't feel like it.  (I've noticed, ever since 9/11, a similar unpredictability in bookings for a time that used to be so guaranteed it was known among storytellers as "the storyteller's Christmas", providing the money to buy presents.)

Today I want to give a humorous story that a generation of children in Mount Clemens grew up screaming over and laughing at the "Gooney Wolf," as one child called it.  I've never recorded it and if I did, it would only be with a live audience of children.  It is safest to use from Kindergarten on.  There are a very few Preschoolers unable to handle the tense threats of the Gunniwolf.  My Gunniwolf puppet stayed hidden in a large colorful roomy bag until he popped out.  He returned to the bag (with a bit of movements and grumbling while hidden) once the girl was out of the woods.  The song melody is unimportant as long as it's fairly monotonous.  (One storyteller I know uses the ABC song.)

While I never made a video of the story, there are some pictures from a workshop I gave.  If you want to see the other pictures, go to A to Z, Puppets are EASY!  The workshop included my telling the story as an  example of how puppets can be used to tell stories.  I considered inserting the pictures, but think you should get the story first.  The photos are at the end. 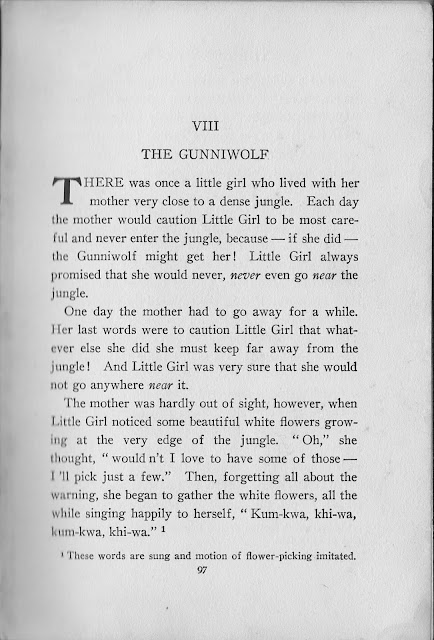 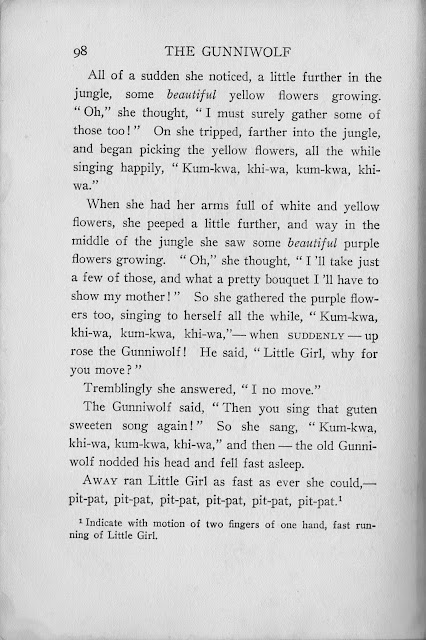 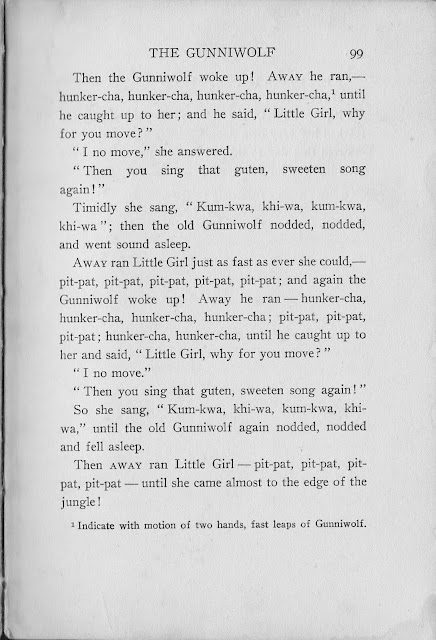 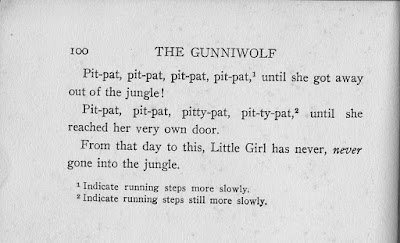 Those great photos were taken by Kathy Calhoun at the program I did for the Birmingham Storytellers Guild.  THANKS, KATHY!!!  I'm awful when it comes to taking photos and so I'm immensely grateful to Kathy.

When the story ended and I talked with my young audiences, I pointed out how the little girl used her head to escape.  We also talked about if they would return to get the forgotten flowers.  Usually the response was "NO WAY!"  There were a few who advocated being prepared to attack the wolf.  That led into more talk about using your brains being better than violence.  It also is why I learned not to let the children near the puppet, in or out of the bag, afterwards as a few wanted to hit him.  Aside from the need to avoid violence, I hated replacing his styrofoam teeth!

The story first appeared in the 1918 book, Story-Hour Favorites; Selected for Library, School, and Home Use, compiled by Wilhelmina Harper.  It proves last week's comment about "when a teacher or a librarian or anyone else who does a lot of storytelling puts together an anthology of stories, they are more likely to be Ready-to-Tell."  After Harper's name we are told she was "Children's Librarian, Queensboro Public Library."  It was the first of her anthologies.  She died in 1973 and published throughout the first half of the 20th century.  She was an excellent example of those who created storytelling in libraries and schools in the early 20th century.  She also, unlike some publishing at the time, gave fairly thorough explanations of sources.  In the case of The Gunniwolf, she notes it is "Adapted from a Southern Nonsense Tale."

That book is now out of print and considered a classic.  This review by Karen O'Hanlon, however, does an excellent appraisal of the value of this story.

The good news is the book was again brought back for a time in print, so a copy is a bit easier to find.  The newer editions had all new illustrations, some of which capture both the Gunniwolf's menace and humor.  That's a neat trick and I think the children who have seen my wolf puppet will agree it's the secret to this story working.