Death of a Dowager and the Legend of the Ghost Light

This article appears early for a special partially time-sensitive reason. 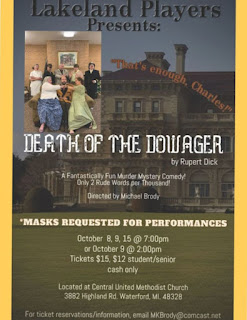 Lakeland Players brings back live theater in the spacious community hall at Central United Methodist Church in Waterford.  There's plenty of room for distance seating, especially if you fall off your seat laughing at this spoof of British mysteries.

Yes, I'm among this crazy cast playing a Cockney housekeeper who claims "I can only say what I see!", but her husband, the butler, keeps cautioning her to not say quite so much.

Did the butler do it?

Come see and laugh along at this murderous ensemble who want "Mummy", the old dowager, dead.

As the playbill proclaims: Only 2 Rude Words per Thousand!

Also since this is October and I try to include something spooky each week, it's the perfect time to talk about the Legend of the Ghost Light.  Not having their own playhouse, Lakeland and certainly CUMC are unable to honor this superstition.  One of my favorite articles on it appears back in 2013 (how appropriate) on the blog of local Birmingham Village Players.  Unfortunately I was unable to reach anyone there to grant permission to reprint it here.  I've been there to see their "Playwrights @ Work" in the past because my friend, Jacqueline Salter, is active in it and is also a member of the same nearby community theatre groups where I am active.  Jackie did a series for Clarkston Village Players on theatre traditions and superstitions, including the Ghost Light.  She has graciously given permission to post it here.

This is one superstition that has proven itself helpful in the modern theater.  A ghost light is a single light bulb left lit on the stage when the theater is dark. When leaving for the night, a ghost light is brought downstage center and turned on. The reason for leaving the light is purely practical. It’s a safety thing. Light ensures the first person back into the theater will not fall through a trapdoor, fall into an orchestra pit or just tumble off the edge of the stage.

Superstitious thespians say that a ghost light will chase away mischievous  spirits.  Others say that it lights the way for ghosts that are around every theater.  The origin of this superstition might be that a "dark" theater is a theater without a play.  No play results in no work and no money.  Leaving a light means the theater is not really "dark", but awaiting the next production.  At any rate a ghost light supposedly helps ensure the theatrical spirits stay happy and contented.  A good thing, because who needs an irate spirit or two lurking in the wings.

Thank you, Jackie, and we have had "dark" theatres for too long.  There is certainly a likelihood that any theatre still contains ghosts from all the intense effort expended there.  I have one other link which gives a few additional ideas.  Theatrecrafts.com in its Glossary of Technical Theatre Terms opened the topic up for comments.  The first comment by Stephen Litterst, gives an urban legend with a humorous look at how it might have proven useful.  Bringing it back to Metropolitan Detroit, it is certainly a union center, so the fourth and fifth comments spin an Actor's Equity possibility on yet another practical reason.

However you want to think about it, you may notice the various spellings of "theater" and "theatre" here.  When I worked for another employer they required the Americanized "theater", but there was one place where I could always spell it by my preferred "theatre" -- my undergraduate degree was in Theatre Arts.  Those roots run deeply and inform my storytelling.

Maybe that's why I've been in demand for two local cemetery walks.  This year and last year's earlier walks at Oak Hill Cemetery have appeared here.  This Sunday, since The Death of a Dowager goes dark before one final Friday performance of Dowager, there's yet another cemetery walk here in Clarkston.  In this busy time, I'll post that information here later this week.