Walking in a Graveyard 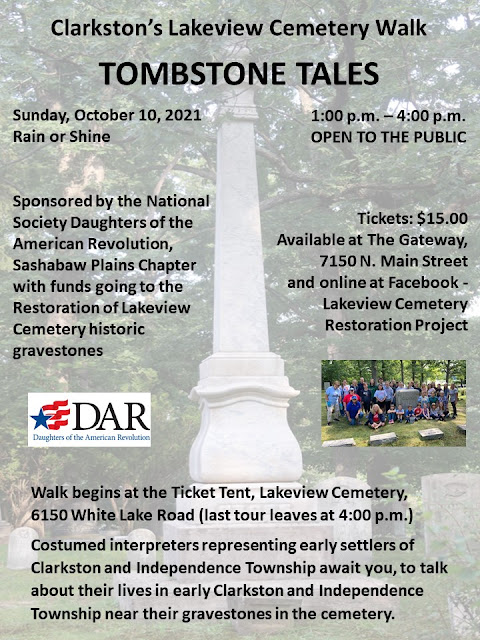 The phrase "somebody just walked over my grave" is a superstition about when a person gets a creepy chill.  Various sites give a dry explanation but U.K site, The Phrase Finder, gives a slightly fuller look at its medieval legendary origin, an American variant I'd forgotten, and a scientific explanation.  (It's an interesting site to prowl for sayings you may wonder about their origin.)

If you are in my area, please join me for yet another cemetery walk.  That's why I'm sending this out as yet a second early message.  A storyteller's life is filled with a calendar dotted with individual programs -- or at least it was before the schedule canceling caused by Covid.  Things have become end-of-warm-weather hectic as we stand on the brink of another winter once again unpredictable as to how storytelling, theatre, schools, libraries, museums and so much more will be affected.

I love doing what I call "running my mouth for fun and profit!"  Storytelling is my main focus with added bits of time substituting at a nearby library because I didn't want to lose my skills at another profession I love.  Covid has moved storytelling into the virtual world and caused me to look at what I do and why I do it.

Earlier this week I mentioned my undergraduate degree in Theatre Arts.  Theatre for me is addictive.  For many years my library schedule prevented returning to it.  The first time I was able once again to return, I found it sucking me back into its world.  Nowadays that means Community Theatre as most professional commitments would require more than my storytelling time permits.  Even that is limited to involvement within a half hour of my home.  At one point Michigan began offering more film work.  I confess to considering it, but never "got around to it."  Why?  My reluctance to convert my storytelling to a virtual platform revealed the reason.

For several years at my first library job I had a weekly radio and later cable television program.  My theatre training permits my imagining an audience when performing alone, so why don't I seek virtual opportunities?  When a venue wants me to come and be filmed for presentation virtually, I will do it, BUT find even the smallest of audiences makes the process so much more rewarding.  Why?  Why do I do what I do?  Examining those questions revealed a need for audience response.  Even the less direct  (and slightly less satisfactory) involvement of directing a show still can give audience response.  Similarly doing online reference work lacks the public response a librarian receives over the desk or, at least, on the phone.  I require public contact and response in my work.  Movies, for example, lack that.  They give, at best, a delayed response.

This blog is called "Storytelling + Research = LoiS", but I would hate to lose all interaction with an audience.  It's why I've never really followed through on switching to writing as a profession.  So if you're able to catch my storytelling, it probably will be a live performance.  Yes, I have some recorded programs, but, like snowflakes, each live performance is different.  The audience interaction in them makes a difference in how I present it.  When done just before a videographer it will differ somewhat from what I offer to an actual audience.

A perfect example of that occurs this month in "spooky" programs offered to families possibly bringing preschoolers up through older children and still another to disabled adults touched by Covid deaths.  I must judge each group avoiding inappropriate material and present what is most likely to be what that audience can enjoy.  Former president Bill Clinton made famous the phrase "It's the economy, stupid" to explain what he saw as the critical deciding factor in elections.  For my storytelling it's the audience which is critical.  It would be stupid for me to eliminate their response in my work.

That's the end of my self-examination and next week I will return to a story fitting this month's spooky nature.