Seton - A Rabbit's Story of His Life, Written by Himself - Keeping the Public in Public Domain 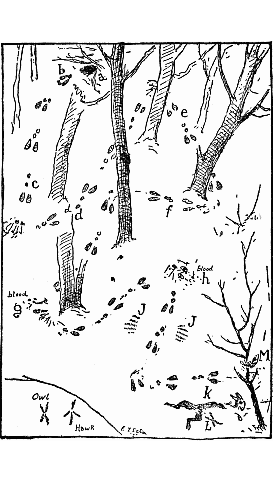 Have you gone for a hike lately?  For many of us right now that means bundling up!  Wind chills and snow have much of the northern hemisphere very much in the grip of winter!

More about that in today's story, but first a look back at last week.  Public Domain Day was a week ago on January 1st with many 1926 U.S. works and international works by authors, composers, and more also being added.  That latter is worth noting:

I went through my personal collection and found my 1926 edition of Ernest Thompson Seton's Woodland Tales, not realizing an earlier 1922 edition was already at Project Gutenberg.  In Seton's "Things to See in Wintertime" section he has a "Tale" he called "Tracks and the Stories They Tell" with the most common tracks of Dog, Cat, Sparrow, Chicken, and Robin.  He called it a "Tale", but it's really the following #56 that is actually a Tale.  He found a story  discovered by following the tracks of a rabbit all the way through to some final  feathers to solve a Woodland murder mystery.  His illustration is small and a bit hard to follow.  I was able to enlarge it a bit to make it slightly easier to follow.  I would recommend, if you wanted to re-tell the story, getting an artist to make a larger version.  (There's a limit  as to how large a picture may be enlarged before it becomes unreadable.)

One other quick note, Seton in the Preface called his stories "Mother Carey Tales."  Mother Carey is usually a personification of the sea, but he used it as a Mother Nature figure, complete with all the favoring of the strong over the weak.

TALE 56
A Rabbit's Story of His Life, Written by Himself

Yes, the Rabbit wrote it himself and about himself in the oldest writing on earth, that is the tracks of his feet. 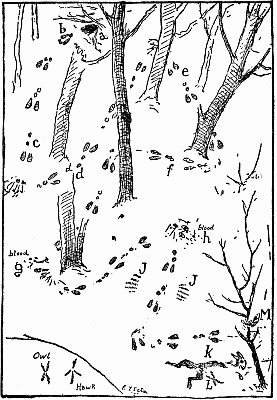 In February of 1885, one morning after a light snowfall, I went tramping through the woods north of Toronto, when I came on something that always makes me stop and look—the fresh tracks of an animal. This was the track of a Cottontail Rabbit and I followed its windings with thrills of interest. There it began under a little brush pile (a); the bed of brown leaves showing that he settled there, before the snow-fall began. Now here (b) he leaped out after the snow ceased, for the tracks are sharp, and sat looking around. See the two long marks of his hind feet and in front the two smaller prints of his front feet; behind is the mark made by his tail, showing that he was sitting on it.

Then he had taken alarm at something and dashed off at speed (c), for now his hind feet are tracking ahead of the front feet, as in most bounding forefoots, and the faster he goes, the farther ahead those hind feet get.

See now how he dodged about here and there, this way and that, among the trees, as though trying to escape some dreaded enemy (c, d, e, f).

But what enemy? There are no other tracks, and still the wild jumping went on.

At "h" I found more blood and at "j" I got a new thrill, for there, plain enough on each side of the Rabbit track, were finger-like marks, and the truth dawned on me that these were the prints of great wings. The Rabbit was fleeing from an eagle, a hawk, or an owl. Some twenty yards farther "k" I found in the snow the remains of the luckless Rabbit partly devoured. Then I knew that the eagle had not done it, for he would have taken the Rabbit's body away, not eaten him up there. So it must have been a hawk or an owl. I looked for something to tell me which, and I got it. Right by the Rabbit's remains was the large twin-toed track (l) that told me that an owl had been there, and that therefore he was the criminal. Had it been a hawk the mark would have been as shown in the left lower corner, three toes forward and one back, whereas the owl usually sets his foot with two toes forward and two backward, as in the sketch. This, then, I felt sure was the work of an owl. But which owl? There were two, maybe three kinds in that valley. I wished to know exactly and, looking for further evidence, I found on a sapling near by a big soft, downy, owlish feather (m) with three brown bars across it; which told me plainly that a Barred Owl or Hoot Owl had been there recently, and that he was almost certainly the killer of the Cottontail.

This may sound like a story of Sherlock Holmes among the animals—a flimsy tale of circumstantial evidence. But while I was making my notes, what should come flying through the woods but the Owl himself, back to make another meal, no doubt. He alighted on a branch just above my head, barely ten feet up, and there gave me the best of proof, next to eye witness of the deed, that all I had gathered from the tracks and signs in the snow was quite true.

I had no camera in those days, but had my sketch book, and as he sat, I made a drawing which hangs to-day among my pictures that are beyond price.

Here, then, is a chapter of wild life which no man saw, which man could not have seen, for the presence of a man would have prevented it. And yet we know it was true, for it was written by the Rabbit himself.

If you have the seeing eye, you will be able to read many strange and thrilling happenings written for you thus in the snow, the mud, and even the sand and the dust.

Seton in this story and the study of animal tracks in "Tale 55" encourages us to see nature's stories.  I try to observe those stories on my snowy hikes, but confess snow depths make it hard to get a clear view.  They're sometimes as difficult to decipher as in Seton's own small illustrations.

Now for the "fine print" about Keeping the Stories in Public Domain.  (You can always enlarge it on your computer.)