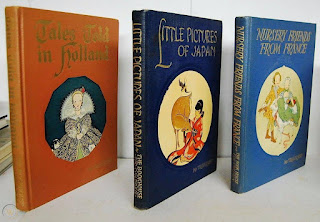 Olive Beaupre Miller established the publishing company of The Book House for Children and produced the classic My Book House set and more.  Among those "and more" books was a three book set called My Travelship with books focused on Japan, Holland, and France.  Tales Told in Holland was published in 1926 and is now in Public Domain.

The Netherlands is informally called Holland even though that is only the name of two (North Holland and South Holland) of the twelve regions.  At the time of publishing both North and South were all one district.

Tales Told in Holland covers all of the Netherlands, which the Foreword says attempts "to reveal all sides of Dutch life, -- Dutch history, Dutch art, Dutch literature, Dutch geography, Dutch customs, and withal, the Dutchman' sense of humor, his love of cleanliness and thrift, his sturdy independence and the character of his fancies."  That's a large job for a country with a complicated history.  Today's tale is set in the transitional time after both Spain and France were removed in the Dutch Revolt and in the story we meet the Dutch William of Orange or William the Silent (sometimes even called William the Taciturn).  Don't confuse this William of Orange with either his descendants, William II nor the English William III who is the one commonly called "William of Orange", from the reign of "William and Mary" over England, Ireland and Scotland.

Yes, it's confusing, and adding in both Spain and France trying to claim Holland adds to more than I want to discuss.  It's enough to know the country had tried for a long time to be left alone to run its own affairs.  The real focus is William the Silent or Taciturn opposite an ordinary man wanting self-government of the land and so proud of his team of dogs that he outruns the King and his fine horses.

Miller retells the folktale from the province of Gelderland and, as for the rest of the Tales Told in Holland, the illustrations are by Maud and Miska Petersham.  Their over 50 year career in illustrating children's books is excellent and in this book they even recreate illustrations by Dutch master artists to celebrate its art.  For this story, however, I quibble with the picture of the "Little Man in the Dog Cart" -- or more precisely there only being one dog pulling the cart.

Because I love sled dogs, huskies, malamutes and more.  The picture makes it look like one dog is pulling.  Right now my own "Malamutt" (husky/malamute commonly called an "Alaskan Husky") is getting on in years.  As a senior dog he's finally trying more indoor life.  Notice I said "trying"?  Too often he's like this picture found ages ago on the internet. 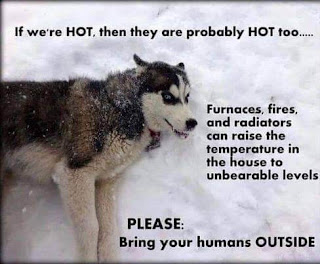 He's now often the only dog on the trail panting, while other dogs and their humans are FREEZING!

Now you can see why I keep coming back to this story.  Obviously sled dogs aren't a Dutch breed, but the nature of this "little man" thumbing his nose at unappreciated rulers by letting dogs show his own superiority reveals "the Dutchman' sense of humor" with a dash of that "sturdy independence."   It also includes a Dutch song or nursery rhyme. 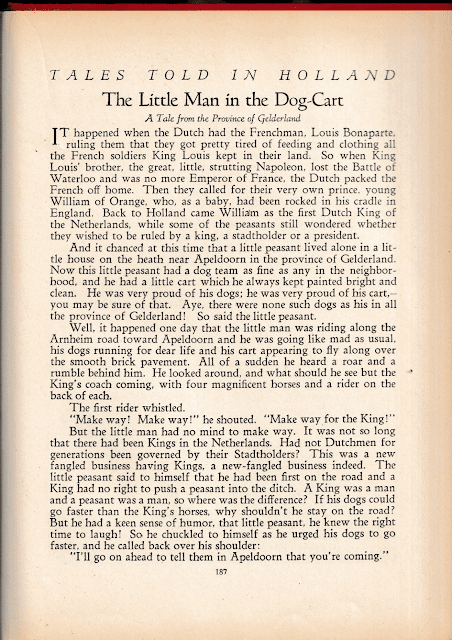 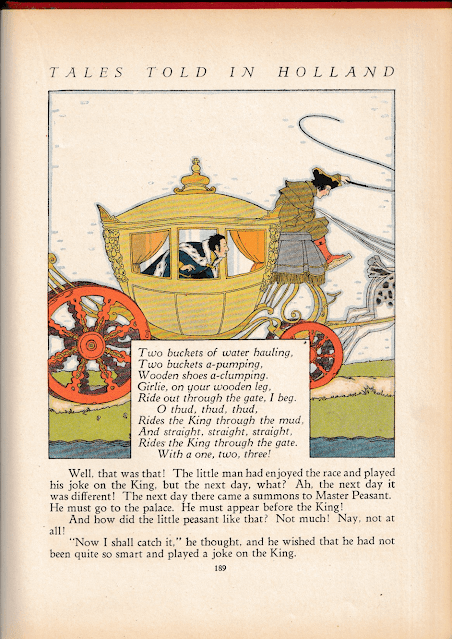 To which I'll add a picture I often use as wallpaper on my computer at this time of year. 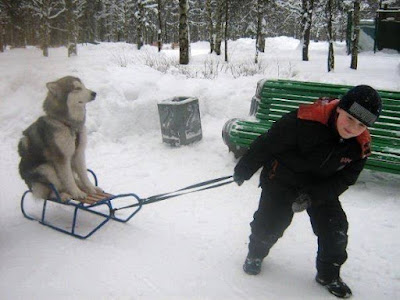 Happy travels with or without a dog, but always with a story!