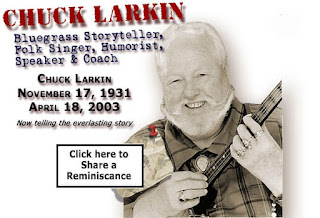 Last week I mentioned the late and truly great storyteller, Chuck Larkin.  Chuck died April 18, 2003 and if there's any way he can tell stories in "the Great Beyond", I'm sure he's doing it.  Fortunately his family has decided to pay and keep his website online at http://chucklarkin.com/index.html.

Rather than hunt up the page on the Wayback Machine filled with his traditional stories, the site lets you download Christmas Traditional Stories from the Southeast (Chuck was deeply rooted in Georgia); Fish Tales, tall tales about fish and the people who chase them; Halloween Stories, scary stories about haints, ghosts and things-that-go-bump-in-the-night (including my absolute favorite, "Mary Culhaine"); Hunting for Tall Tales, a collection of tall tales about hunters, dogs and critters who outwit them; a short play for storytellers titled "I Don't Tell Lies"; Short and Tall Tales, he says they are very, very short tall tales; and then Tall Tall Tales, traditional tall tales and stories; The Marriage of Sir Gawain and Lady Ragnell, a pre-Christian saga adapted from a mid-15th century poem fragment and from listening to other variants of this legend from a number of storyteller; and The Hunt,  An Irish Celtic tale about Fianna Warriors.

Since Tall Tales were Chuck's specialty I decided to post two of his "very, very short tales" that seem appropriate at this time when farmers have been planting and harvesting, the weather is extra hot, and roads everywhere seem under construction.

Traditional Stories from the Website of Bluegrass Storyteller, Chuck Larkin

The first time I ever visited Georgia was in Habersham County. Uncle John and Aunt Irene had a ridge farm in the Georgia mountains. You may never have seen a ridge farm or if you did you may not have realized how they farm the ridges. You can’t use a tractor. It would roll over on you the first time you tried to turn a row. Folks use mules for the ploughing, planting, weeding and harvesting. Not my Uncle John, he was a gentleman farmer. He raised razorback hogs, a mountain species of the wild piney wood rooters. The mountain variety have long back legs and long ear lobes with holes in the bottom of the ear lobes. The first time I saw one I thought they wore ear bobs in their ear holes. They are ugly. Their heads look like their necks had barfed. One fell into the pond up in front of the farm house. They had that 550-pound hog out of the water in about five minutes. Aunt Irene told me they had to scum ugly off that pond for a year.

My Uncle John raised that species of mountain, razorback hogs, because of the long back legs. The hogs could root right up the side of a ridge turn around, tuck them long back legs into their ear holes and slide right back down the root path. Then they would turn right around and root their way back up the ridge. When it was time to plant, Uncle John tied little disks on the hogs’ tails. Disks look like Frisbees and they break up clods of fresh turned dirt. Uncle John would throw table scraps out over the ridge and at dusk turns the hogs loose. By morning the hogs would have rooted and disked the whole side of the ridge. Uncle John would sit on his rocking chair on his back porch with a bag of seed grain and his sling shot and plant the side of the ridge.

When the harvest was ready all he had to do was hit the side of the ridge with a two-by-four piece of wood, wham bam! All the vegetables would roll down off the ridge to the catch fence. I mean that does make farming a whole lot easier.

The only mistake Uncle John ever made was the summer he planted some of those hot, hot, hot Mexican jalapeno peppers along the catch fence. When those fiery, hot peppers got ripe, they put off an incredible amount of seething heat that just rolled up the side of the ridge. Well that summer, so happened to be a summer so hot that I’ve watched stumps in the pasture tear themselves out of the ground and on their roots crawl underneath the trees to cool off. I have even seen the shade in the middle of the day creep under the trees to cool off. Hot and Dry! We had the Health Department out to spray the fish in the cat fish pond for ticks. The fish would come out of the pond around noon each day and swim around in the dust to keep away from the boiling water. Well to make a long story short let me tell you what happened. I know you may not believe this but I do not have any reason to lie to you. Oh I might tell you something seven or eight different ways but I wouldn’t lie. On the hottest day you could imagine coupled with the scorching heat waves coming off those Jalapeno peppers and rolling up the ridge a 465 pound hog got into the middle of the ridge field and flat out melted! That’s a fact. Though I admit some might tend to argue but I was there and I seen it for myself. The only thing Uncle John harvested from that ridge field was french fried potatoes, onion rings and the first sweet fried corn ever to be sent to market.

Well they’re all retired now. Besides farming Uncle John took up road building part time. Lots of folks from Florida came up into the mountains to build retirement homes at the top of the ridges. There was a need for road building and Uncle John figured out how he could under bid his competition. He made a ton of money. It was the experience of his cousin Rutledge that gave him the idea.

AND THAT’S A TRUE STORY

After Uncle John got a road building contract for one of the ridges he would take a four foot long pointed stick and a small, hard rubber headed mallet. Then he drove a series of holes about a foot or so deep sygoglin up the side of the ridge where the road was going to go. Each hole he filled with shucked corn, about one inch deep. Last, he would haul his hogs to the beginning of the trail and turn them loose without any supper. The hungry hogs would smell the corn and root down and then sideways to the next hole filled with some corn until they had rooted a road right up the ridge, switchbacks and all. All Uncle John had to do was grade the road and throw down some gravel. He got so rich he was able to park a Leer Jet on cement blocks in his front yard.

AND THAT’S A TRUE STORY

All of Chuck's stories end with this permission:

These are very short traditional stories collected and adapted for telling by Bluegrass Storyteller, Chuck Larkin.

Permission to use, revise and tell the stories from this manuscript is granted to the storytelling public.
As I mentioned last week, Tall Tales use what you know as fact and then S-T-R-E-T-C-H it!  Chuck was well aware of the traditions and had a lot of fun with it.  His website is a gold mine worth digging up this type of story.  Feel free to try your hand at it.
Posted by Lois Sprengnether Keel at 10:00 PM