Today's story is NOT Public Domain.  It's graciously been shared by friend and storytelling colleague, Priscilla Howe and her publisher, Parkhurst Brothers.
It's no secret I'm a HUGE fan of Hodja stories, publishing about him seven times before this.  Sometimes he may have another name, like Goha in Egypt or the Mullah in Iran, but this trickster or "wise fool" is popular throughout the Middle East and beyond.  Priscilla had the wonderful experience of spending five months in Bulgaria on a Fulbright Scholarship collecting their folklore, which is little known in English-language folklore resources.  I asked if there was any way to share something from her book, Clever, Kind, Tricky & Sly.  This story is the result.  I'll say more after it.  We'll leave the bragging to the Hodja.

Nasruddin Hodja Is Warmed by Moonbeams


One day in the village square, Nasruddin Hodja was bragging about how easily he could stand the cold. “I’m so tough, I could sleep in that tree tonight with no blanket, no fire, nothing to warm me but the clothes I’m wearing now.”

He climbed the tree that evening and slept all night on a wide branch. In the morning, the villagers were surprised.

“How did you manage?”

“Ha! You lose the bet! You had the warmth of moonbeams!”

The next week, the Hodja invited all of those who had bet against him to dinner at his house. This was a rare occasion, as the Hodja was usually reluctant to feed so many friends. Everyone came, crowding into the Hodja’s house. They waited and waited for the meal to be served, but they couldn’t even smell food cooking.

After an hour, one spoke up, “Hodja, did you invite us for a meal? Will there be food?”

“Oh, yes, I’m cooking the rice now. Let us check on it.” They went to the kitchen, where there was an enormous iron pot of water, with maybe twenty rice grains in the bottom, hung over a small candle.

“Hodja! That candle will never heat the water!”

“Right. And moonbeams never warmed a man in a tree on a cold winter’s night.”

Storyteller's Note: I know this story best as a tale from Ethiopia called Fire on the Mountain, in which a poor man watches a fire on a distant mountain to keep himself warm all night. 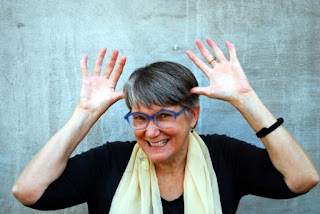 Oh, Priscilla!  Here in the extreme heat of this summer it's great to enjoy that look back at the difficulty of getting warm in winter.

Like Priscilla, I remember the Ethiopian version, but also recall this popular story idea in the book, Once the Hodja, by Alice Geer Kelsey.  From start to finish Kelsey has the flame of a candle keep him going, making this Bulgarian moonbeam version slightly different.  Stories travel and those differences are delightful!

I was going to tell more about Priscilla, but her website (I'll repeat the link, https://www.priscillahowe.com/) does such a great job of it.  Let me just say, if ever I wanted a mentor, I'd try to catch her when she's away from her home in Kansas, possibly before going out to tell internationally in one of fourteen countries.  Aside from being talented and an unstoppable bundle of fun, she's great with puppets, too.  Her blog comes close to feeling like a bit of time to chat together about such things over coffee at the kitchen table.  Her workshops are even more filled with her experience and that fun.

It's worth noting that the second half of Clever, Kind, Tricky, and Sly: A Bulgarian Folktale Sampler has tales about the Bulgarian trickster, "Clever Peter."  He's unique to Bulgarian folklore, poking his wit against the rich and self-important.  That misleading peasant is not as foolish as he wants to appear.  He's also not to be confused with the BBC show of the same name.  The book even includes a Bulgarian version of Cinderella, lots of source notes with ideas for your own storytelling, and that favorite author, "Minnie Moore."  (Aaargh!  pun alert!)  Take a look at the book's reviews to tempt you even further.

I also want to promote Priscilla's publisher, Parkhurst Brothers.  The company has a wide catalog, but I especially appreciate its large Storytelling section filled with stories and insight into storytelling.  It's president, Ted Parkhurst, has returned to his roots right here in Marion, Michigan.  While storytelling is not all he publishes, his support of the storytelling world is long and thorough.  As he said in his LinkedIn profile: We believe the storytelling community will grow in size and influence over the next generation, and we are doing our part to make that happen.