In today's Part III of An Argosy of Fables, the Oriental Fables section looks at Chinese Fables.  I found today's tales, plus two I omit, particularly moving.  (Yes, later I'll tell a bit about the two I omit.)  I'm a sucker for Fox tales, so here is 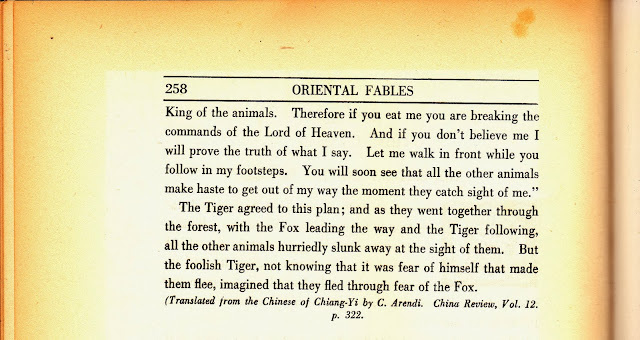 Here's a second haunting story I must include. 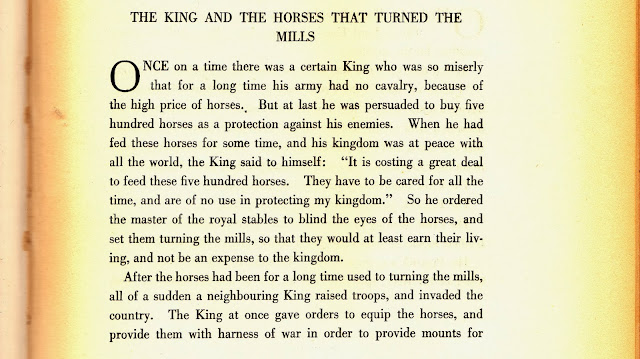 I also said I would explain about the two I omitted.  China's diversity includes 55 ethnic minorities in addition to the Han Chinese majority.  Cooper doesn't  tell if his selections come from them or not. Since those minorities currently are less than 10% of the total population of China, I presume the fables Cooper includes are from the majority, but his sources are impossible for me to trace with one exception.  A major source is the journal called "China Review", which no longer exists although a similar title began in 1994. Two others seem to be translated by Cooper from the French.  Only Dennys's The Folklore of China can be found online so I skipped his fables, but the two in Argosy, "The Crows and the Owls" and "The Folly of Avarice" still resonate in the 21st century.  Dennys only devotes the final 10 pages of his 156 page book to fables.  If you bother to prowl the book, you see Cooper took the discussion of fables by Dennys and did readers the service of just presenting them as stories.

Next time we'll see the final section of "Oriental  Fables", Armenian and Turkish Fables.
**********************
This is part of a series of weekly posting of stories under the category, "Keeping the Public in Public Domain."  I will post on Saturdays in the series unless that week I have other research articles.  I hope this will satisfy all who have found these stories worthwhile.  I include myself in that audience.  The idea behind Public Domain was to preserve our cultural heritage after the authors and their immediate heirs were compensated.  I feel strongly current copyright law delays this intent on works of the 20th century.  I hope you enjoy discovering new stories.