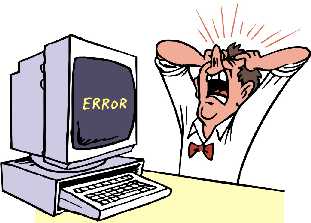 It's true "To err is human, but it takes a computer to really screw things up!",

but when the human who's erring is using a computer, LOOK OUT!

If you received a postcard from me and went to the whited out address of http://www.StorytellingResearchLoiS.com/search/label/Victorian Christmas and found supposedly no articles exist, please don't blame the computer.  There are articles here on Victorian Christmas.

Here's "the rest of the story"

I saw the horribly long address of http://www.StorytellingResearchLoiS.com/search/label/Victorian%20Christmas and thought I'd made a mistake.  (Not yet, but . . . ) I checked by going to what was the current article and saw on my address line:
http://www.StorytellingResearchLoiS.com/search/label/Victorian Christmas.
YIKES! I thought and whited out that awful  "%20".  While I was at it I also whited out that I had "2" articles on Victorian Christmas, because by then I had reviewed my Victorian Christmas resources and decided to write more, a lot more.

The address line didn't show all the computer language needed to get to my Victorian Christmas articles, but it was needed.  Computers don't read an address that has a space.  Just because it shows a space on the address line doesn't mean it is what the computer is reading.  Yes, I should and do know that, but didn't think about it when I had a bottle of correction fluid in hand.

So don't blame the computer.  Don't even blame the Victorians.  They knew how to take Christmas and make it into something far more complicated, but interesting, than it had been in earlier times.  The "steampunk" genre mixes modern technology with an anachronistic Victorian era.  Just think how people in the 19th century could really screw things up if they had a computer and were like me!

Thank heavens storytelling is low tech...most of the time.

With all of this, my series, "Keeping the Public in Public Domain" continues to take a break.  It's only published "on Saturdays unless that week I have other research articles."  The Victorian Christmas articles look ahead to December.  I hope to return to "Keeping the Public in Public Domain" during December.  At least October 17th's Scary Ghost Stories for October, December, or Whenever provided several Public Domain Christmas stories from the Victorian era and that's no error.
Posted by Lois Sprengnether Keel at 3:29 PM