Today's Keeping the Public in Public Domain has an idea for storytellers or puppeteers looking for a way to build a program wrapped around one character.  I've escaped from fables (see end of this post for more information) and this year's look Victorian Christmas that took the second half of October.

When I was still creating storytelling programs at one library I found it was easy to do a continuing story where each week I told a new adventure about one character -- I would have a puppet for the character, but that's optional.  Books that offer episodic stories where each chapter has a stand-alone adventure about one character were perfect for this.  The era covered by Public Domain had many such books and even series following characters.  I should have included Cuffy Bear when I came to Arthur Scott Bailey on my shelves as that was the first of a series about Cuffy and also the first of such books I have.

David Cory had many series because he syndicated children's stories for the daily WZJ radio show in Newark, New Jersey.  A collection of his correspondence, some manuscripts, and memorabilia is housed at the Special Collections Research Center at Syracuse University Libraries.  Their description of his work says, "He came to writing after a twenty-year career as a stockbroker, beginning with stories invented for his children."  Project Gutenberg currently has 14 of his books including four series:

Three of the Puss-In-Boots, Jr. series

Three of the Little Jack Rabbit series
and

one from the Little Indian series.
Project Gutenberg has three from the series LITTLE JOURNEYS TO HAPPY LAND (no cover given)  and 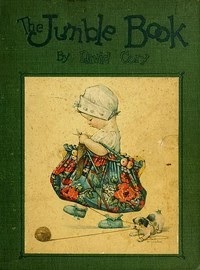 The Jumble Book,  a book that doesn't seem to be a series book, but has a variety of animal stories.

My own series book is from the Billy Bunny Books of the 1920s.  Project Gutenberg currently has two.  Mine is yet a third book: 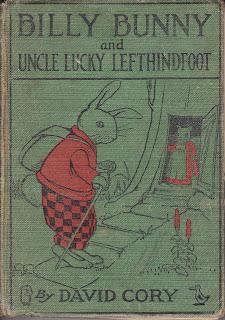 The leaves are still enough on the trees, as I write this, giving some of Michigan's autumn beauty.  As a result I'm choosing these two stories that include Jack Frost and the second tale includes a bit of nature facts.

You will notice the mention at the beginning and end of each story tying it to the story just told or about to be told.  The song includes a word guaranteed to make today's children snicker, "gay."  It would be reasonable to avoid the distraction by changing the wording from "and gay" to "today" unless you want to spend time before the story discussing the term.  The vocabulary of older works sometimes requires you to make such decisions. 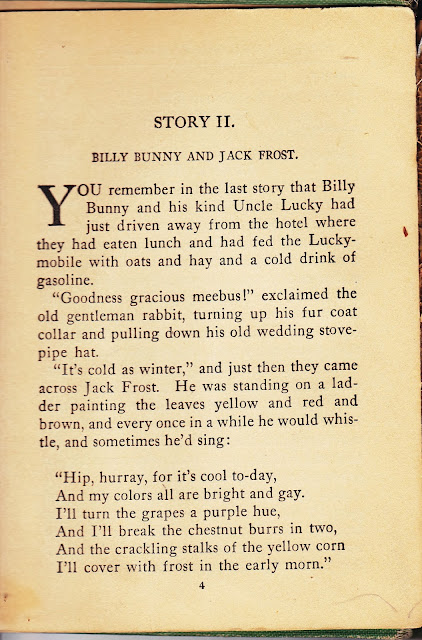 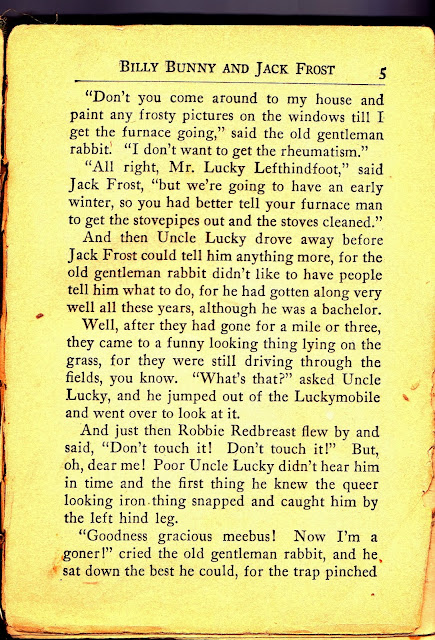 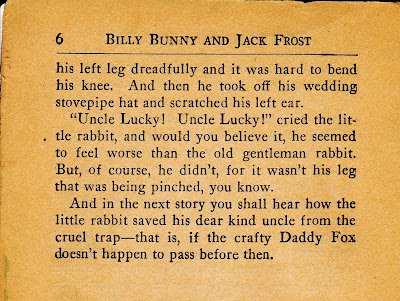 Actually we're jumping to another story.  By the way, talking about changes and decisions, I might decide to remove some of the personification of those who aren't animals.  Examples of this are the character, Mr. Happy Sun, changing it to "the happy sun" and "his" to "its" and similarly handle Willy Wind if I don't think it hurts Cory's work.  Mother Nature is there, too.  Shades of Thornton Burgess and Old Mother West Wind!  Puppeteers especially need to consider the number of characters used. 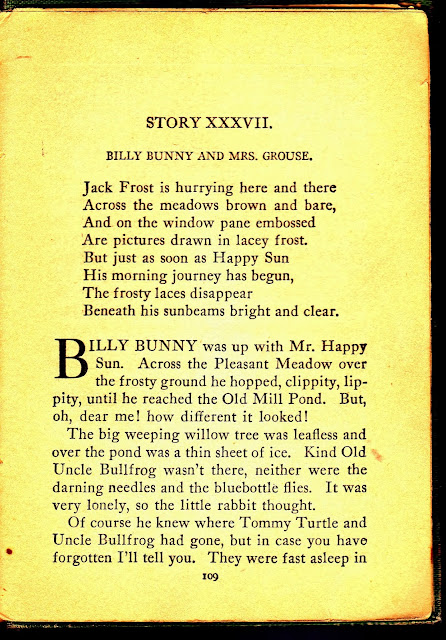 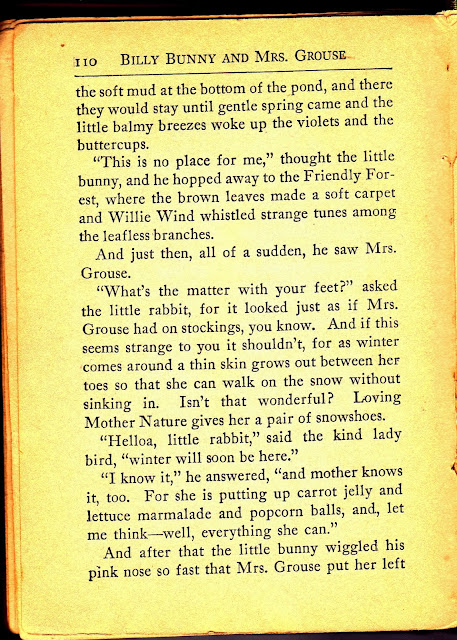 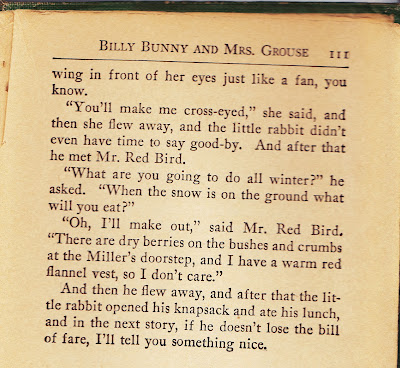 If you're curious about that Luckymobile Uncle Lucky drove, go to this article from March 26, 2009 in the blog, Lady, That's My Skull to see it. 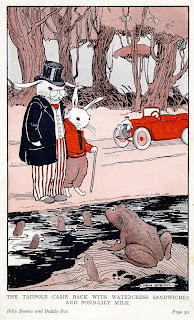 The blog's author, who writes under the name of Sleestak, was able to find several volumes of the series.  Sleestak seems to enjoy the art of Hugh Spencer more than the stories and shows several more illustrations from Billy Bunny and Daddy Fox, (available from Project Gutenberg) including a Billy Bunny doll worth watching for at antique stores. 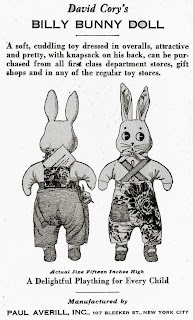 *****
At the beginning of today's article I mentioned Frederic Taber Cooper's An Argosy of Fables.  Prior to spending the second half of October looking at Victorian Christmas celebrations, starting on September 21, 2013, I made several posts from Argosy's Book One, Classical Fables, and Book Two, Oriental Fables, although I stopped in that section without including Armenian and Turkish Fables.  I'm a big fan of Turkish folktales about Nasreddin Hodja, so those fables could provide short additional material to balance out a program.  Book Three is called Modern Fables (remember the book was published in 1921) and covers English, French, Spanish, Russian (all by Krilov except one from that prolific author, Anonymous), German, and Polish (all by Krasicki) fables.  Book Four is titled "Kraal and Wigwam Fables" looking at fables from various areas of Africa and various Native American tales Cooper calls fables.  The good news is the sources of the Native American material is better identified than in many Public Domain books.  Unfortunately many of the other sources may be difficult to track down, especially when Cooper was referring to sources in another language or in something other than a book.  His work as editor, however, produces generally tellable stories.

If you consider that fables are the wisdom of the past and other cultures, the book is an excellent overview of a major type of story.  The same organization that brings us the Wikipedia does us a great service with its Wikisource placing the book online.
******************
This is my slightly revised series statement of purpose:
This is part of a series of weekly posting of stories under the category, "Keeping the Public in Public Domain."  The idea behind Public Domain was to preserve our cultural heritage after the authors and their immediate heirs were compensated.  I feel strongly current copyright law delays this intent on works of the 20th century.  I hope you enjoy discovering new stories.