Cowles - Bread of Gold - Keeping the Public in Public Domain

Julia Darrow Cowles proved to be an interesting resource, so I tried to see what I could learn about her.  With this I've done two blog posts with stories from her work.  I already completed the first, and this second article includes what little information I could find on her.  She was among those in the late 19th and early 20th century who led that period's storytelling revival.  Personally I'm downloading to an eReader a book of hers, The Art of Storytelling, with Nearly Half a Hundred Stories.  It's great for an eReader as she indexes her stories and does an excellent job of making them accessible to young listeners.  It's just the sort of resource I love when telling on the road, especially in a foreign country, where a theme can pop up and I want to find related stories.  She was a bit more thorough in her own notation of sources than typically found in many anthologies of the era.

I especially thank a fellow librarian and lover of children's literature, Barbara Begin Campbell, at Oakland University's School of Education for checking her own copy of the original edition of Junior Book of Authors!  It saved me trying to find a library in the false hope she might just be mentioned.  (A slight UPDATE here: Google Books is online with that book and it is searchable.  The recent court decision about Google Books providing a research service that doesn't jeopardize copyright is proving true.)  Mrs. Cowles nearly anonymous passing is a perfect example of how important it is to preserve the Public Domain as our cultural heritage.  There's a tiny bit in the paragraph below I was able to find with some online detective work on my part.  It is probably all anybody but her own possible descendants might know.

The best I could learn online about Julia Darrow Cowles is she was also known as Mrs. Frances Dana Cowles: (January 6, 1862 - September 6, 1919), was from Canada, had a Connecticut ancestor, was probably Baptist (see pages 16 - 18 for a list of all her books in A Baptist Bibliography :  Being a Register of Printed Material By and About Baptists; Including Works Written Against the Baptists edited by Edward C. Starr, Curator of the American Baptist Historical Society), and she also was "a member of a well-known Minneapolis literary family" according to "The Heimatbrief", the newsletter magazine of the German-Bohemian Society, September 2003.   Since only a fraction of her books are currently online, I would hope more are added to the various digital archives.

Here's a tasty story of some bread that won't make good Thanksgiving stuffing or other eating. 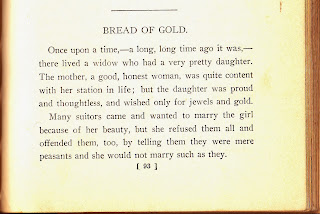 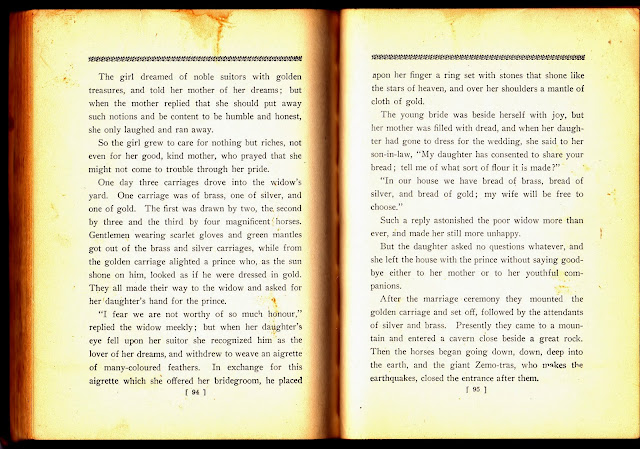 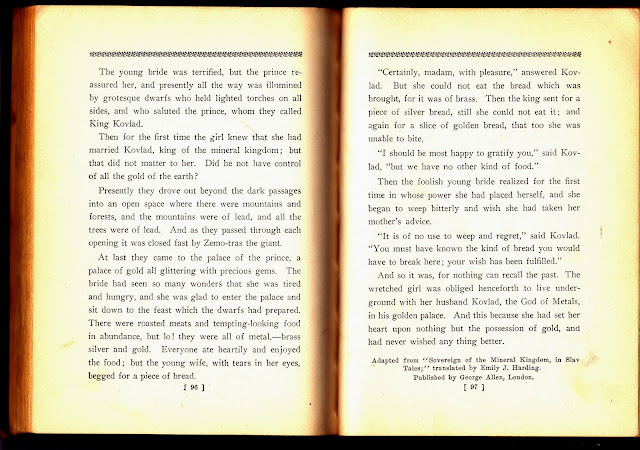 I love Cowles telling us this comes from Slav Tales, translated by Emily J. Harding, even noting the publisher.  Not typical.  This slender 124 page volume includes several more from Slav Tales, along with many Tibetan and Gypsy stories -- not the usual sources, and an assortment of other tales.
**********************
This is part of a series of postings of stories under the category, "Keeping the Public in Public Domain."  The idea behind Public Domain was to preserve our cultural heritage after the authors and their immediate heirs were compensated.  I feel strongly current copyright law delays this intent on works of the 20th century.  I hope you enjoy discovering new stories.