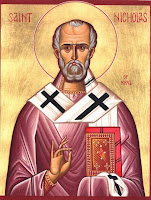 'Twas the day after St. Nicholas Day when I did a program as "The Hired Girl" on Victorian Christmas only to have an attendee give me "the facts" about Saint Nicholas.  I was sooo happy that, while I mentioned the saint, I didn't dwell on his history since it didn't fit the topic.  Didn't find what he said matched what I'd heard, but came home to fact check.

Surprisingly many of my high school classmates were mentioning that December 6 was celebrated as his feast day.

WELL!  That did it, I had to see what facts are recorded as well as the legends.

First of all he goes by many names, according to Saints.Sqpn.com:

But that's nothing compared to the 90 groups listed there claiming him as their patron -- including Butchers, Bakers and Candle Makers as well as the three countries, Germany, Greece, and Russia and the 80 towns (throughout Europe and one in the Palestinian Christian town of Beit Jala, ).


Taking the saint out of his stained glass and finding facts agreed upon by all sources is much trickier.  (Catholic Online says, "he is said to have been represented by Christian artists more frequently than any saint except our Lady.")  Unfortunately they quote Butler's Lives of the Saints, a 30 year work putting into four volumes the massive 68 volume Acta Santorum.  I say unfortunately because a lot of legend and unverified statements are included in telling of a saint for whom much may be inferred, but little proven.  The Acta and Lives at least mention the sources start in the mid-ninth and early tenth centuries.

Since St. Nicholas was born in the third century, and it is reported he died on December 6 in mid-fourth century (the years vary, but that date returns often), there's a long gap before recording his life. As the Catholic Encyclopedia put it, "Though he is one of the most popular saints in the Greek as well as the Latin Church, there is scarcely anything historically certain about him except that he was Bishop of Myra in the fourth century."
Myra (now Demre) was a major city in Lycia, but to put that in modern terms, it's now in the Anatolian province of Turkey. His birth is also probably in the same region as Butler claims, "All accounts agree that he was a native of Patara, in Lycia."  That's only three miles from Myra.  The area was Greek during his lifetime.  He was buried in his cathedral there until 1087.  Then his "translation" occurred.  I put that in quotes as it's a matter of opinion why his relics were moved to Bari, Italy.  The link I gave you has a detailed (and from the viewpoint of the Basilica of St. Nicholas in Bari) says his removal came after a papal vision to preserve him from Turks  taking over the area, destroying Christian churches and objects.  Its being a contest with Venice and protested by the citizens of Myra makes it an action-packed story of its own.  Readers of the Ellis Peters medieval mystery series about Brother Cadfael can appreciate it based on the first book in that series, A Morbid Taste for Bones.

I found it interesting that Wikipedia notes: There are numerous variations of this account. In some versions those taking the relics are characterized as thieves or pirates, in others they are said to have taken them in response to a vision wherein Saint Nicholas himself appeared and commanded that his relics be moved in order to preserve them from the impending Muslim conquest. Currently at Bari, there are two churches at his shrine, one Roman Catholic and one Orthodox.

Unfortunately those variations aren't footnoted.  The source I gave before Wikipedia is clearly on the side of a vision.  Wikipedia does a good job of pointing out the relics are proven to be in both Bari and Venice, while Myra tells of continued production from the sarcophagus of "a clear watery liquid which smells like rose water, called manna (or myrrh), which is believed by the faithful to possess miraculous powers."  Sounds like St. Nicholas indeed is like Santa Claus in being several places at once so everyone benefits.

While we're discussing Legends, there are plenty to go around.

There's a saying that what's important in our lives is "what we do between the dashes" of our birth and death.  What happened between his dashes is the stuff of legend...Oh goodie! says the storyteller in me.  Oh rats! says the fact-checker.

If you want to check the many places I went, there are too many to list here, but you might start at dmoz, the open directory project.

For fun, go to the St. Nicholas Center and also CatholicCulture.org and HubPages for St. Nicholas traditions from around the world, activities, crafts, recipes, games, and, of course, stories and more.  Google Images has many of those pictures of St. Nicholas and also offers many coloring pages.

Did my program attendee's facts turn up?  No, but I'm so glad I checked as I found the wealth and generosity of St. Nicholas continues.