Do you know what is the third most used language in the U.S.?  (No fair peeking!)  Oh the answers I get when I ask kids that question!

It's American Sign Language.  Such a useful, beautiful language and fun to use with storytelling.  I often start a program with a story told in voice and sign as it's a great way to get an audience of all ages participating.  Yes, for ASL purists, telling in voice and sign tends toward the Pidgin English part of the signing continuum because English word order is used.  It's also a great way to expose people to sign language.

I often find people interested in learning more about signing, whether for Baby Sign which fosters language and communication waaaay earlier than waiting for oral communication, or to help communicate with the hearing impaired. 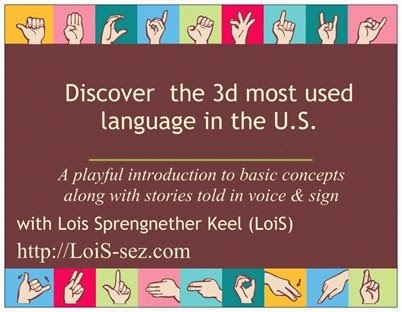 As a result I offer everything from one-time programs up through a series such as I've been doing for two years now at the Warren Civic Center Library.  This past week I ended our session with today's fun tall tale that is Public Domain in a different way.

Usually I feature stories dating before 1923, but this comes from a different category.  I like to point out the U.S.Government Printing Office is paid for by our taxes.  Edward L. Keithahn was the curator and librarian for the Alaska Historical Museum and Library who collected these stories from the Shishmaref school children for the Department of the Interior's Bureau of Indian Affairs.  His volume, Igloo Tales, was dedicated as "a slight remembrance of the happy years spent among them."  As might be expected there is a lot of "porquoi" stories telling how things came to be, but my favorites are the ones closer to their roots on the playground, today's story and another called "The Story of a Head."  Definitely tall tales.

The book includes many illustrations by Shishmaref native artist, George Aden Ahgupuk, whose own story of how he became an artist is in the book, too, and quite interesting.  Here's the story with illustration and then I'll say a bit more following it. 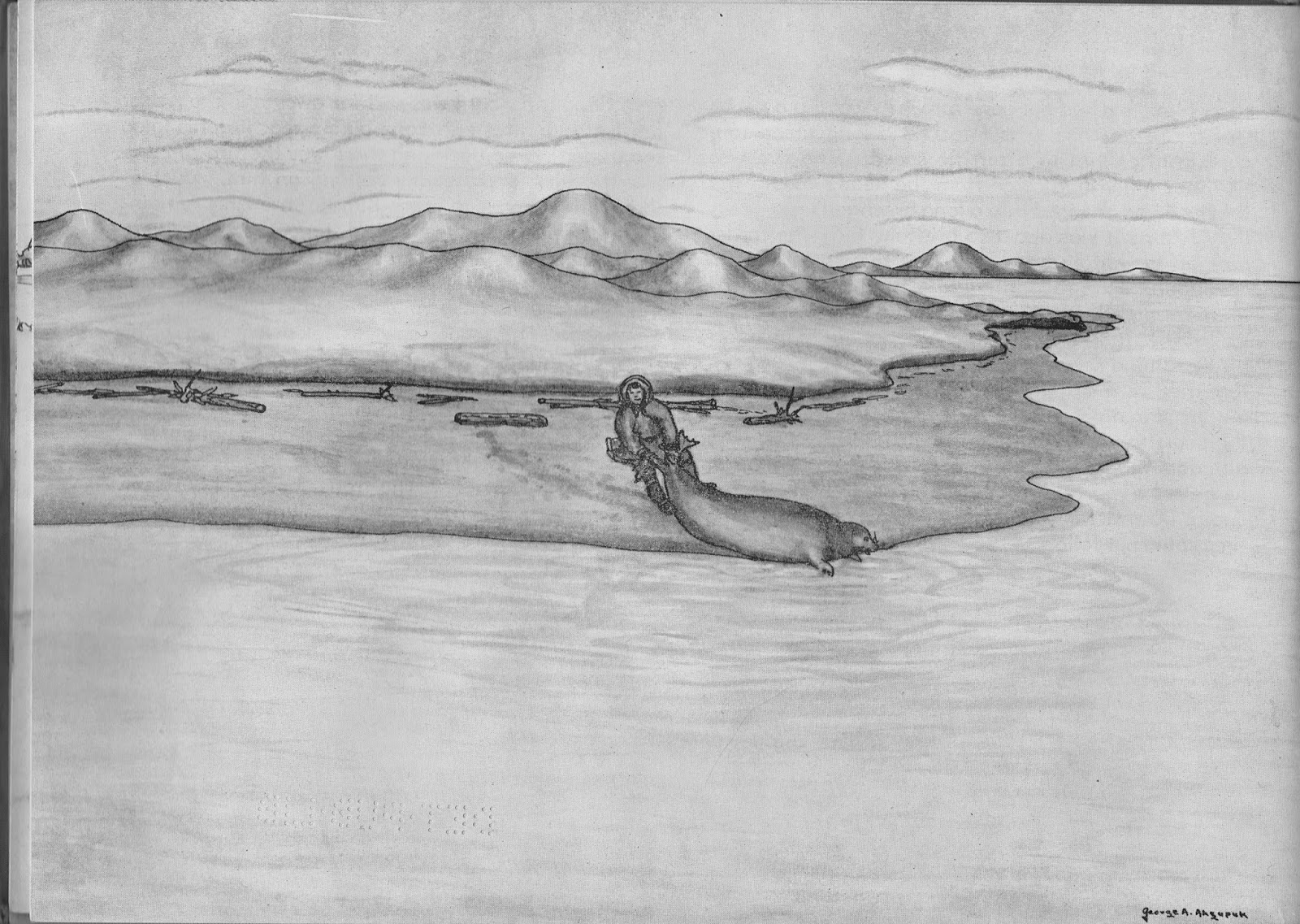 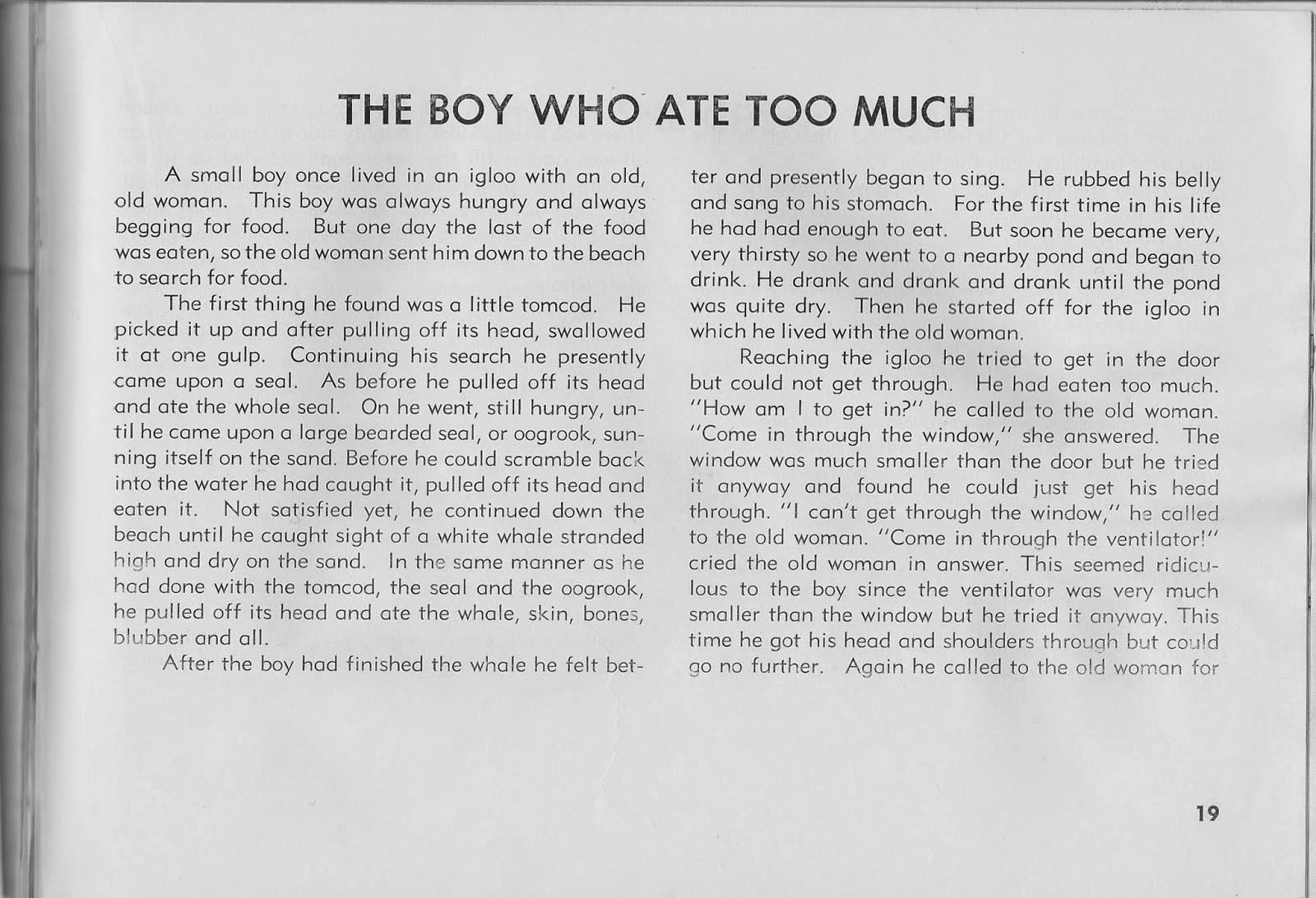 I've been telling this story in voice and sign for so long I also ought to credit its shaping to two other storytellers whose books I own and enjoy.  In her wonderful book for audience participation, Twenty Tellable Tales, Margaret Read MacDonald titles the story "A Whale of a Tale" and credits several sources including Keithahn and also the version by Jean Cothran in The Magic Calabash: Folk Tales from America's Islands and Alaska.  She also mentions another version by Maggie Lind of Bethel, Alaska that I've not heard nor use, along with Lind's statement that "the tale is widely known."

So as you do your taxes, maybe the USGPO  will make you a bit happier when it offers stories.  Storyteller Donald Davis as a young man earning his first paycheck was told to choose something he wanted to think about his taxes going towards and supporting.  He chose the National Parks and visits them as he travels with storytelling.  If you're not ready to go to any of Alaska's many national parks, monuments, or historic sites -- even though Denali is currently warmer than here in southeast Michigan -- then travel in a story.
****************
This is part of a series of postings of stories under the category, "Keeping the Public in Public Domain."  The idea behind Public Domain was to preserve our cultural heritage after the authors and their immediate heirs were compensated.  I feel strongly current copyright law delays this intent on works of the 20th century.  My own library of folklore includes so many books within the Public Domain I decided to share stories from them.  I hope you enjoy discovering new stories.