Unlike the multi-state cooperative for Summer Reading leading many libraries to use the same theme, media centers and their schools seem to pick their own themes for March Reading Month.  Fortunately years of creating programs weekly as a children's librarian produced a large repertoire of programs from a to z. 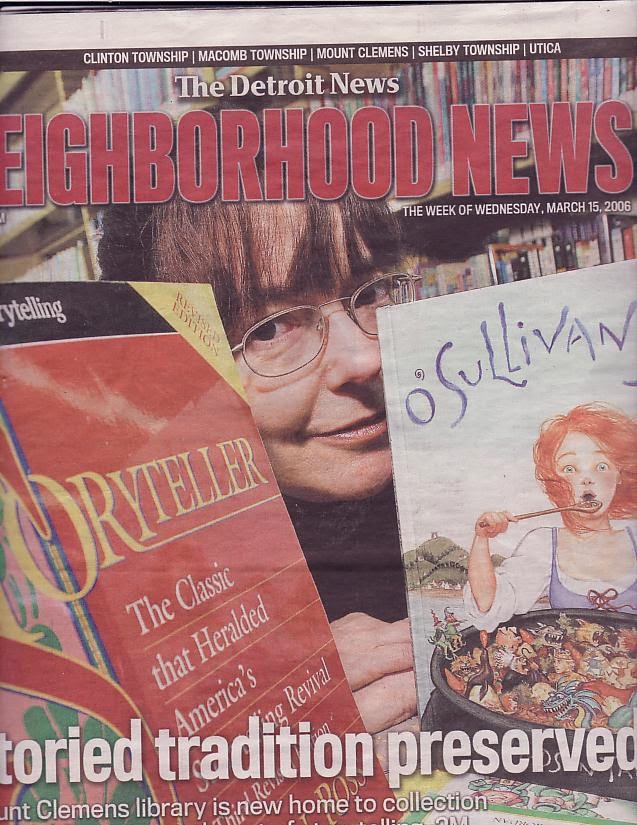 As a result when approached this week by a school planning their Camp Read-a-Lot program for March Reading Month, I began working my way through what I already tell possibly meeting their needs.  I'm not against developing new material, but it takes time to develop and time was short.

A curious program factor mentioned was face painters would use the various characters from one of my stories for their inspiration.  My first thought was an African tale with many animals.  I love telling it in voice and sign as that is good for multi-age programs and this was going to be an evening family program, so all ages would need to be involved.  The further we talked, however, it became obvious my program would benefit from a focus on Michigan's original "campers", the Anishinaabe or People of the Three Fires.

While today's article is the title found on my website, I now call the program "Ahneen Means Welcome!"  I start by saying, AHNEEN!  If there's no response, it gives me a great opportunity to tell more about the native people of Michigan whose rich body of stories seem systematically overlooked when folktales are indexed.  An interesting addition to that introduction is now made if no response comes to Ahneen.  I next say "Boozhoo!", a more informal greeting than the one I learned from native Michigan elders.  This was taught to me by a little girl and her father who were grateful for my sharing the culture of her mother, but they hadn't known the word Ahneen.

Whenever I am approached about Michigan's own Native Americans, including booking this program, I always suggest instead the venue book Michigan's too few Anishinaabe tellers.  For my own background, I explain, as I did in the November 1st, 2014 blog here, on the international email list, Storytell, we compared 4 levels of cultural knowledge:
Level 1 is always the best, but over the years I've come close to level 2.  I'm always aware my own use of the language is as a non-native speaker of this fascinating and complex language.  Words from it can be found throughout Michigan and whenever I cross into nearby Ontario as the Anishinabeg are among Canada's First Nations.  I love to point out as many of these words including Michigan itself (Michigama - Great Water or Large Lake) and other indigenous words all around us as the opportunity permits.

In offering resources before the program, I realized it would be valuable to offer a summary of resources including my previous four articles here related to the Anishinaabe.  If you're wondering about the story to inspire the face painters, I chose a story in my earliest article on the People of the Three Fires (therefore the last shown because of blog formatting), the story of "The Summer Makers."  In addition to comparing two versions of that story there, the topic of Manitos was briefly mentioned in that 11/19/13 article as it was omitted in the simplified version by Julia Darrow Cowles I posted there.  A link was given to the story as told by Henry Rowe Schoolcraft and is the version I use.  If you look at the Schoolcraft version you see the description is still open to artistic interpretation, saying only "His head was enormously large; he had such a queer set of teeth (LSK: I substitute "strange" to avoid present-day reaction to the word "queer"), and no arms." The hero in the story is the Fisher, called by the Anishinaabe name of Ojeeg.  We don't have fishers in Michigan nowadays, so here's a link to more about them including photos.  Other characters in the story are his friends, the Wolverine -- also no longer in the state, but remembered for its spirit in our state's nickname, the Otter, Beaver, Lynx, and Badger, additional characters are the Red Squirrel, and the various Birds released by Ojeeg.  This should give variety for artists.

At the same time my program tells more about both Henry Rowe Schoolcraft, a name well-known in Michigan, and his less well-known but also important Anishinaabe wife, Jane Johnston Schoolcraft or Bamewawagezhikaquay ("Woman of the Sound [that the stars make] Rushing Through the Sky").  My 11/1/14 article gives clues to more about her and also how the poet, Longfellow, used their work to inspire his own epic poem, Hiawatha (even if Michigan's native people know he changed it a great deal).
That same article mentioned several other print resources, especially a list of those I dearly love by Odawa elder, Simon Otto, and even gave a link to a third grade lesson plan template on Michigan's Native People he presented and used in the Petoskey schools where he lives. Beyond Simon's five books and the work of the Schoolcrafts, I added two other influences, Louise Jean Walker and the late ethnobotanist and Anishinaabe elder, Keewaydinoquay Peschel, another Michigan elder who shared insight into her culture with me.  With Michiganders currently occupied with the cold and snow of winter, my program will probably include a tidbit found on this blog's recent, 2/7/15, article.  Its inclusion in the Anishinaabe topic might seem a bit strange as it was posted with a Cuban story.  Only at its end did I give our Native view from Simon Otto about why we need snow.  I'm trying hard to accept this chilling explanation even if it's an uncomfortable one.

Until now, however, my blog doesn't mention three other resources, the brief Ojibwa Indian Legends by Wahbegwonese (Little Flower) nor the nonfiction People of the Three Fires by Clifton, Cornell, and McClurken and the slender Nishnawbe by Lynne Deur.  The title of that final book is another, colloquial, way of saying Anishinabeg, the plural of Anishinaabe.  When I mention my own slender acquaintance with the language, I'm aware of differences in pronunciation or dialect among the Three Fires.  A perfect example is found in the popular hero whose name is written in many ways since the language developed orally and was used by our three closely related members of the Algonquin people.  Most often I see it as Nanabozho, but my introduction to him was as Nanabashoo.  I was told that pronunciation was nearer the Odawa than the Ojibwa (also known as the Chippewa.)  Since one of my friends, gifted storyteller and member of the Saginaw Chippewa Band, is Robyn Henry, I always look forward to her entertaining way of telling the traditional stories.  She often includes Native American sign language, which I enjoy comparing with American Sign Language.  I've never heard nor asked her about this traditional "trickster/transformer", but really need to talk with her about him.  Robyn is overdue for an internet presence, so maybe she'll consider doing a guest article here.  I know it would be worthwhile.

Beyond these specifically Michigan literary resources, the food served at the program was discussed,  including the importance of corn (see the story of Mondawmin on 4/12/14) and blueberries to the Anishinaabe.  We also talked about their school serving that evening the campers' favorites of beans and hot dogs.  This led to my giving the chant and the song about Beans:
Chant - Beans, beans, the musical fruit, the more you eat, the more you toot!
Song (to the tune commonly thought of as either "Coming Through the Rye" or "Auld Lang Syne")  -
Beans for breakfast, beans for supper, beans for good old tea
If I could only be a bean how happy I would be(ans for . . . LSK: repeating as long as you can stand it)  You can blame too many years as a camp counselor for my knowing them!

Of course I always bring the books mentioned here for reference in my program.  They are perfect examples of the value of reading to understand the traditions of Michigan's too frequently little known native population.  I hope you also find it gives you possibilities for your own library's collection, although many would need purchasing from out-of-print sources.

With or without the beans you can see, it's a program and culture I enjoy sharing and I look forward to presenting it yet again.
Posted by Lois Sprengnether Keel at 1:00 AM