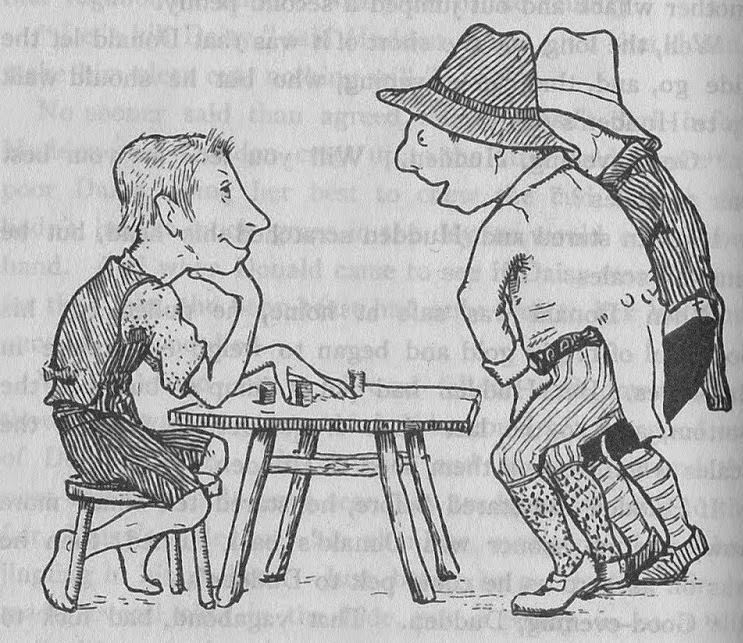 Some bloggers advocate taking controversial stands to generate traffic on a blog.  Not really my style.  Storytellers want to take audiences on a mental journey.  People mentally arguing with you while you tell your story spoils the journey.  That bit of argument happens to me in the classic Irish tale of Hudden and Dudden and Donald O'Neary.  It was a revelation a few years ago to find it told in bouncing good humor by another storyteller.  As a result when St. Patrick's Day neared and I found myself reviewing Irish stories, out popped Donald from the story sack, but he definitely was arguing with me!

I use Blogger to post my weekly blog, but wish it didn't stick comments in a link at the end of an article along with labels.  Even at that, it just lists the number of comments!  It's entirely too easy to skip clicking on those comments or not even realize you can make a comment.  (To avoid spam, commenters also have to jump a few hurdles, making it more bother than many wish to pursue.)

This is why I decided to bring my puzzlement about the story to the email list, Storytell, an excellent international resource for storytellers. Their comments build upon the 4 comments already added below the story.  Click that link, it will take you to them, then you can read the following additional comments followed by my own conclusions.

First I'd like to show those earlier commenters and storytelling friends.  They deserve mention and I also hope you'll click on their internet information (typical storytellers, there's often more than one place, but I tried to choose the most used location and photo) :

Papa Joe Gaudet has a mini photo there, but he deserves the same treatment here as other commenters.
You'll notice two Richards with very similar names. Richard Martin is commonly called Richard in Germany.  He's British and sometimes in Italy, but wherever he may be, he and these others are storytelling ambassadors.

Similarly Richard Marsh is often called Richard in Ireland, which he generally is, offering wonderful Legendary Tours of Ireland, but he's originally from here in Michigan and part of the year he switches to the Basque region of Spain documenting the Irish connection.

For me, the names are the key pointer. I have not told the tale for over a decade. But when I did, I always introduced it as tale reflecting the forcible expropriation of much of the land by successive English colonising settlement. As names, Hudden and Dudden could not be more English, whereas O'Neary is as Irish as you can get. Against that background, Donald has long been the victim and his trickery is an act of independence against all the colonial elite, including the other farmer and the landlord.
***
That's the historical/political differences I mentioned made me begin to notice some of the story's appeal.
***
Nick replied:
Okay, but what nationality were the Innkeeper and the other farmer? I can certainly see this tale being a fable about getting revenge on the English, but in the versions I’ve read and heard, the Innkeeper might be English, but the other farmer is “sounds” Irish. Thus, Donald comes across as uncaring at best.
I’m not saying that it’s a bad story, but I am saying that’s one of the reasons I don’t tell it.
***
added an American parallel:

I have read a variant of this story which comes out of the slave tradition in the US - I think it's in Virginia Hamilton's "The People Could Fly."
I think it's simple - to an oppressed people, getting the best of the oppressor in a story is very, very satisfying - and killing them off is best of all. There's a good deal of hostility lurking under a veil of humor. In the other version, it's a grandmother who is killed.....
***
She then continued with a contrasting thought:
on the other hand, traditional stories have a LOT of violent death, sometimes justified, sometimes not. It didn't bother me as a kid. I think that fairy tale death is kind of like cartoon death - think Roadrunner and Coyote - it is not the same as real, actual death....
***
Nick responded:

Sure, but try reversing the nationalities or positions, and see what the story is like. If there’s an “unjust” body count, the story just loses something, in my opinion.

In that vein, here’s a link to Tom Smith’s song of the Roadrunner cartoons, from Wily Coyote’s viewpoint: https://www.youtube.com/watch?v=Vvi00nuctK4
***
Richard Martin pointed out to Nick's "but in the versions I’ve read and heard, the Innkeeper might be English, but the other farmer is “sounds” Irish. ":

Don't forget that the Protestant Ascendency was not simply a matter of a few English landowners. A lot of more ordinary members of society were brought in and so it would not have been at all unusual for there to be a sense of resentment between Donald and others around him, even those whose ancestors had been living there several generations.

This page points to that: http://en.wikipedia.org/wiki/Protestant_Ascendancy

Nonetheless, this discussion points to the importance of only telling a tale you're comfortable with.
***
from Nick:
Very much agreed, Richard. That IS a major reason why I don’t tell the story myself, but it got me to thinking about other Irish trickster stories, some of which I do tell.
My favorite Irish trickster story involves a lot of stealing, both from other thieves and from royalty [who at least count as honorary thieves, I suppose], but no bloodshed of innocent bystanders. I think that’s what I was responding to in the Donald O’Neary story. It’s sort of a “No innocent bystanders were killed by the protagonist in this story” kind of rule.

I hadn’t thought of the other farmer in terms of the Ascendancy at all. Unless I missed something, there are no clues to that effect in the story.
I can easily believe the hard feelings lasting for generations, though.
***

Andy Evans then said:
I left a comment over on the LoiS blog, but the conversation seems to have moved here... I found the same sort of problem with several stories while I was trying to get my basic se together, and I'm glad I'm not the only one who feely this way. When I looked for a Roma story I couldn't find one I was happy with so I build a new one based on the ideas in the stories I found.

On the LoiS Blog, Richard Martin made the point about the political undertones, which make sense. In this context, if I was to tell the story, I'd probably have Donald going to the constable upon finding the cow dead, and getting a clip around the ear for his trouble. The Constable would then sway out of the bar drunk and be hoodwinked into getting into the bag, and subsequently escape from the bag, or be carried off downstream after the two farmers dump him in the river.

I'd probably also have the two farmers carried off at the end and finish by saing something like "and they came ashore far away" so we don't have any deaths.

I appreciate that I'm new to this and I may be committing some kind or heresy by changing the story in this way, ut that seems to get around the worst of the stories. Perhaps the originals were simply written for a more robust time...
***
from Nick:
Not heresy. You have to tell the story in a way that you are willing to tell.
For instance, I like your constable idea, but I don't know if I'd save the
lives of Hudden and Dudden. They're not "innocent bystanders," but had
willfully tried to murder Donald. If I was telling it to children in a
setting where violence should be avoided, then maybe they would get off the
hook.
***
It's time for me to say:
Thank you to all who have considered the problems raised by this story since it was considered a classic Irish tale.  An update here on the story seemed worthwhile.

My own thoughts on this after our discussion tends to echo the reservations Nick mentions, especially telling a story only if I am happy with bringing it to an audience.  That is one of those storytelling principles I give beginning storytellers, because it can make a difference in your presentation.  A story you love is sure to have a higher level of enthusiasm.   On the other hand, it is a valuable look at both why storytellers might not choose a story AND also is a look at how this may tell us something about Irish cultural history and difficulties. IF a class or even other audience was open to looking at such problems, then it's an excellent choice.

In summary, Donald et al is a good example of story selection principles.  For myself, I would pass on it unless the problems of Ireland could be a part of whatever program I was presenting.

I hope you enjoyed this peek into the considerations a storyteller makes when choosing a story.


LoiS(torytell guest authors, I thank you for your thoughtful responses)
Posted by Lois Sprengnether Keel at 1:00 AM

Love seeing all these bright and wonderful "Storytell" faces and reviewing the delightful conversation!--Mary Grace