As Saint Patrick's Day nears I looked through various Irish tales I enjoy telling and found one that always leaves me with mixed feelings.  I'm curious about how others feel about the classic tale of "Hudden and Dudden and Donald O'Neary."

Recently the international email list, Storytell, discussed tales about Envy.  Next month at Paint Creek Folklore Society that's also the topic for what is usually called the Song Swap although spoken arts or other folkloric elements on the month's theme is also possible.  I once took a magazine quiz that asked the question "Who do you envy?" and at the time I was ready to answer "Nobody", but later reconsidered . . . musicians.  I play and sing to a variety of instruments, but when I make a mistake I can always say, "Now you know why I'm a storyteller!"  I love and greatly enjoy music, but not enough to make it my passion the way storytelling is. As a result I planned to tell one of many stories about Envy instead.

What does this have to do with "Hudden and Dudden and Donald O'Neary?"  It's a story about envy and trickery and I would love to get the reactions of others to it.

Ages ago I couldn't understand the story's appeal until I heard someone tell it with crackling good humor as Donald outwitted his two neighbors who regularly tried to hurt him.  The Trickster is an accepted character in folklore, showing somebody living by their wits.  Tricksters often aren't moral, but it doesn't lessen their popularity with many cultures and, yes, my own enjoyment of many of them.  I went to The Funk & Wagnalls Standard Dictionary of Folklore Mythology and Legend to see what that authoritative work might say about tricksters and found:
Psychologically, the role of the trickster seems to be that of projecting the insufficiencies of man in his universe onto a smaller creature who, in besting his larger adversaries, permits the satisfactions of an obvious identification to those who recount or listen to these tales.
The remaining part of a lengthy discussion  mentions the trickster's role in sacred mythology and how the trickster is often a cultural hero, focusing on specific cultures of Africa, North and South America.

Here's the story, with illustrations by John D. Batten, letting further comment wait until the end. 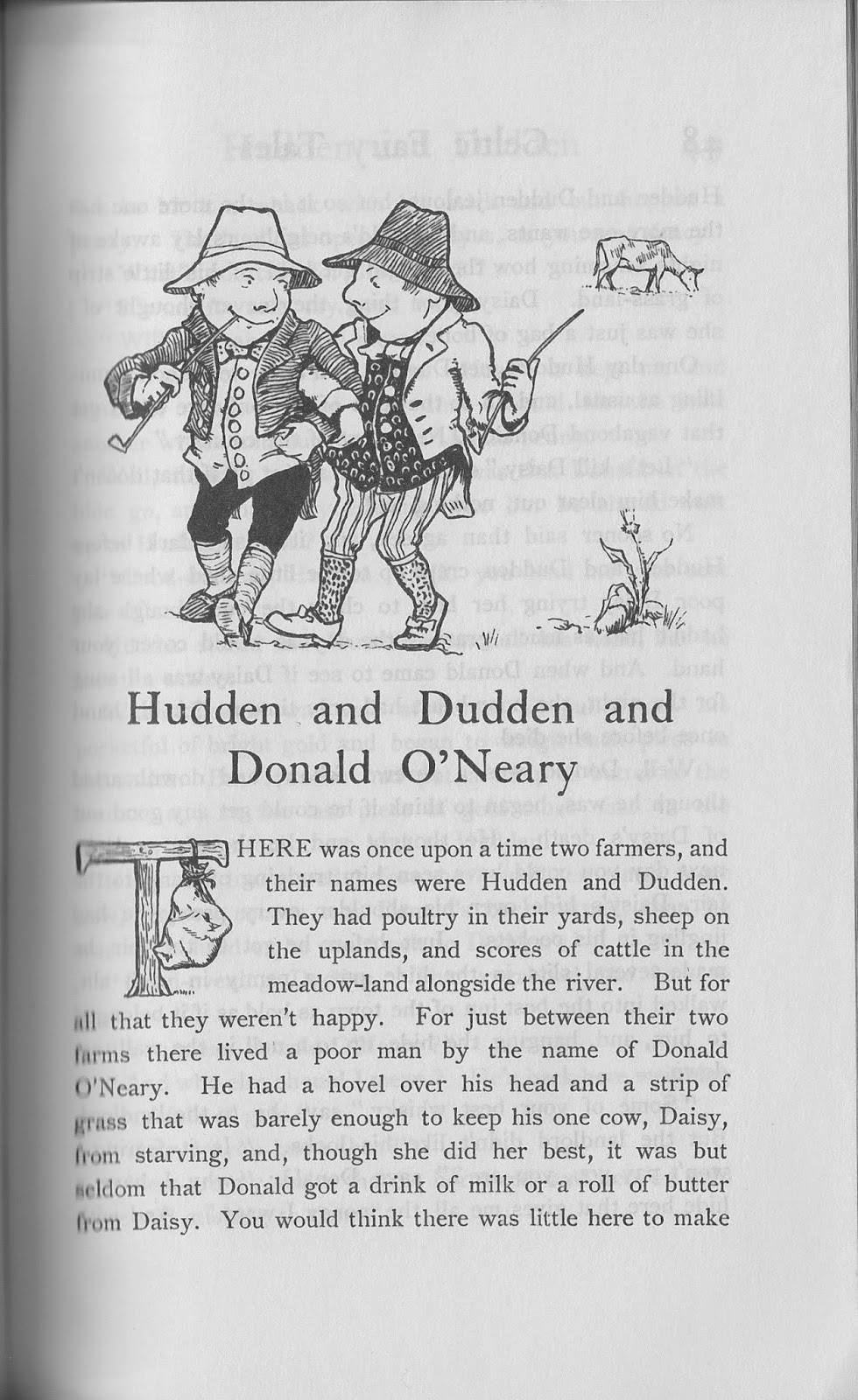 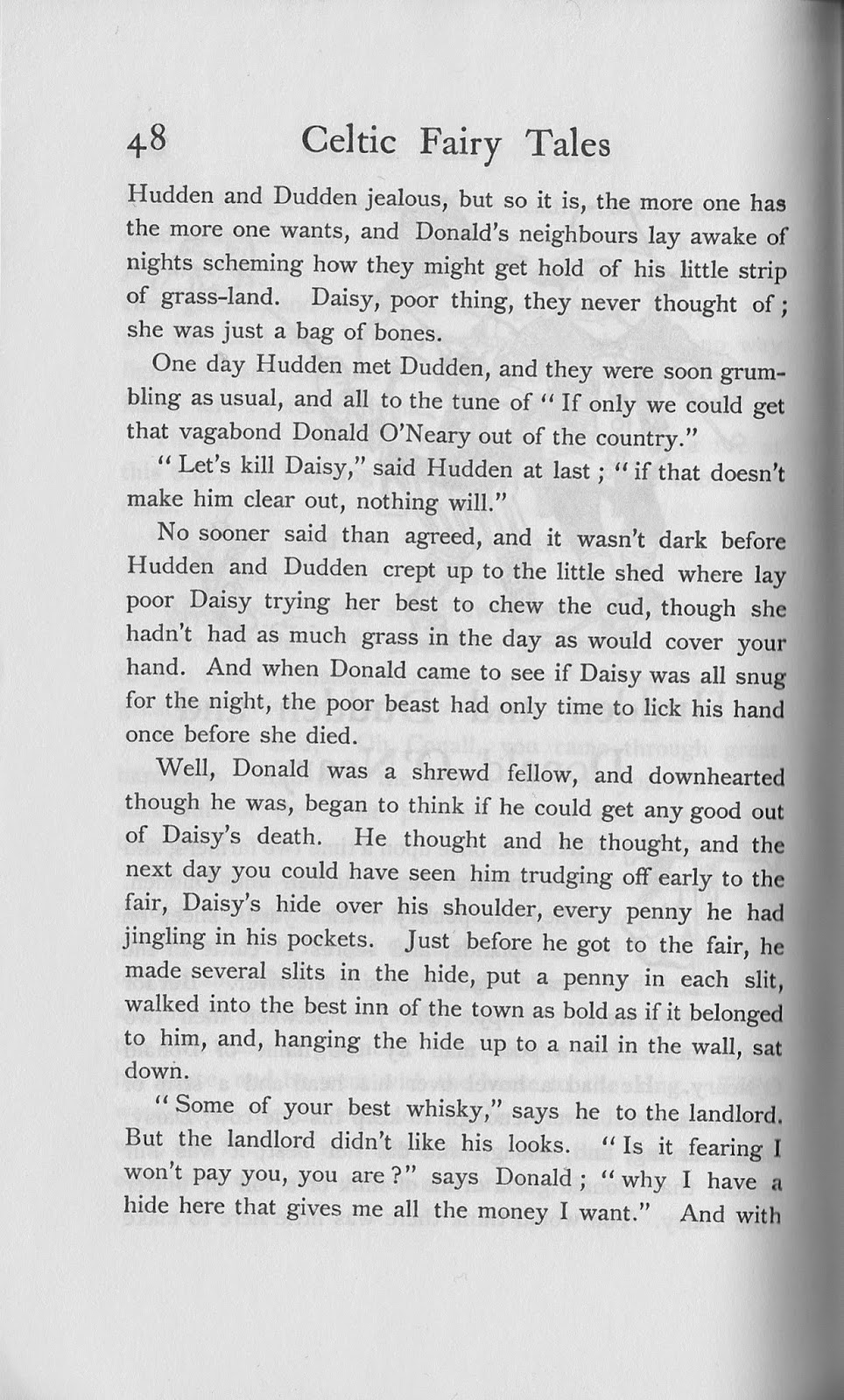 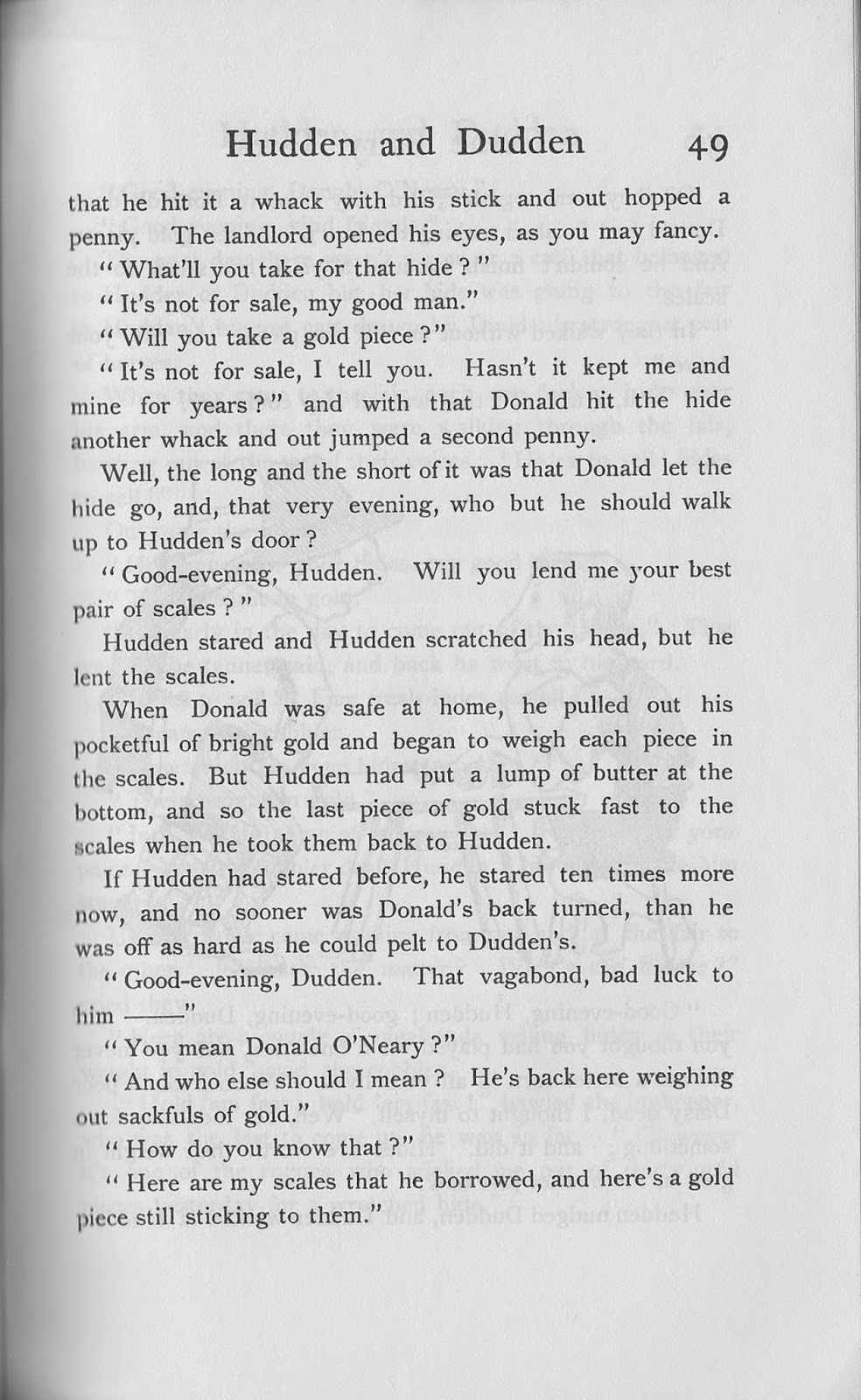 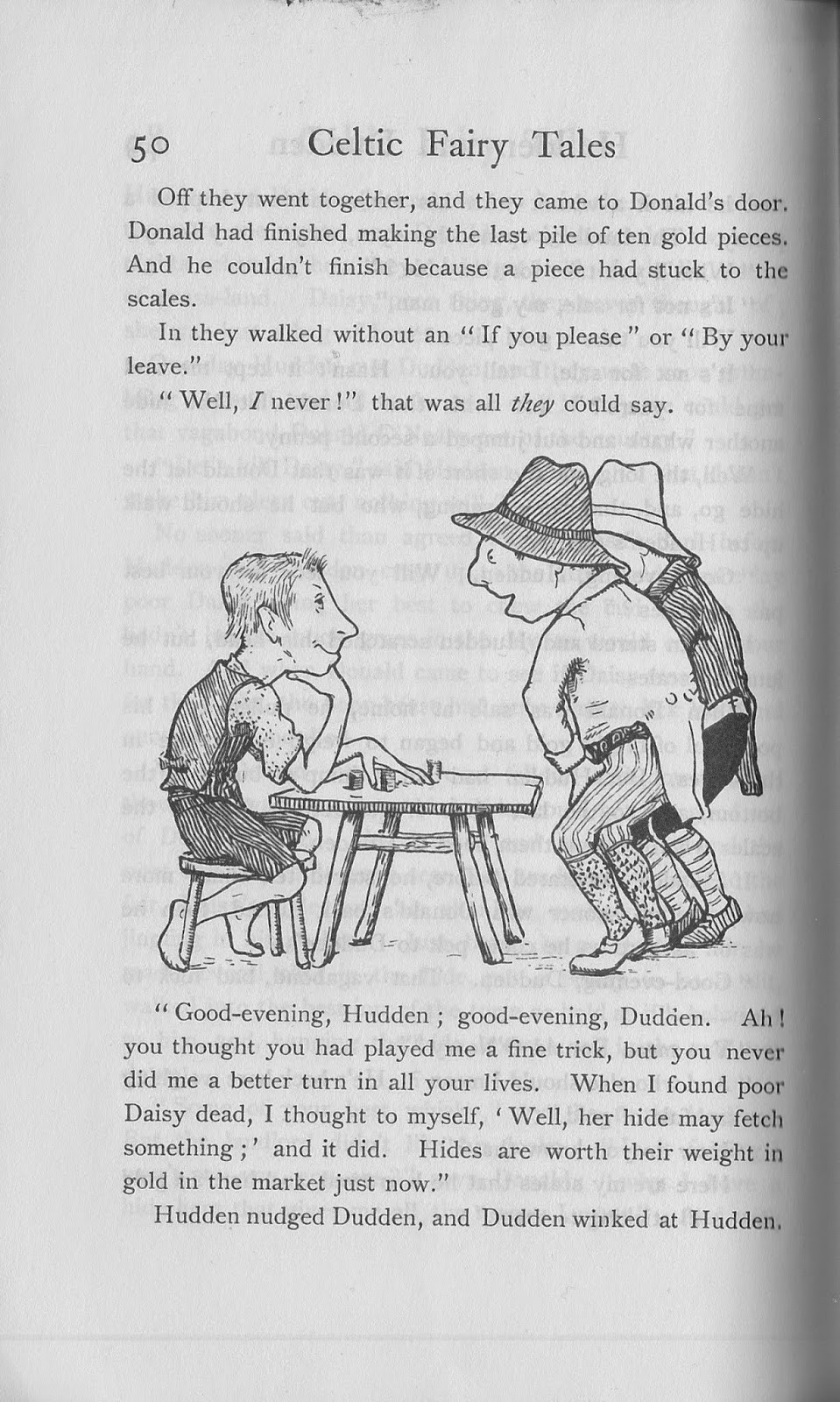 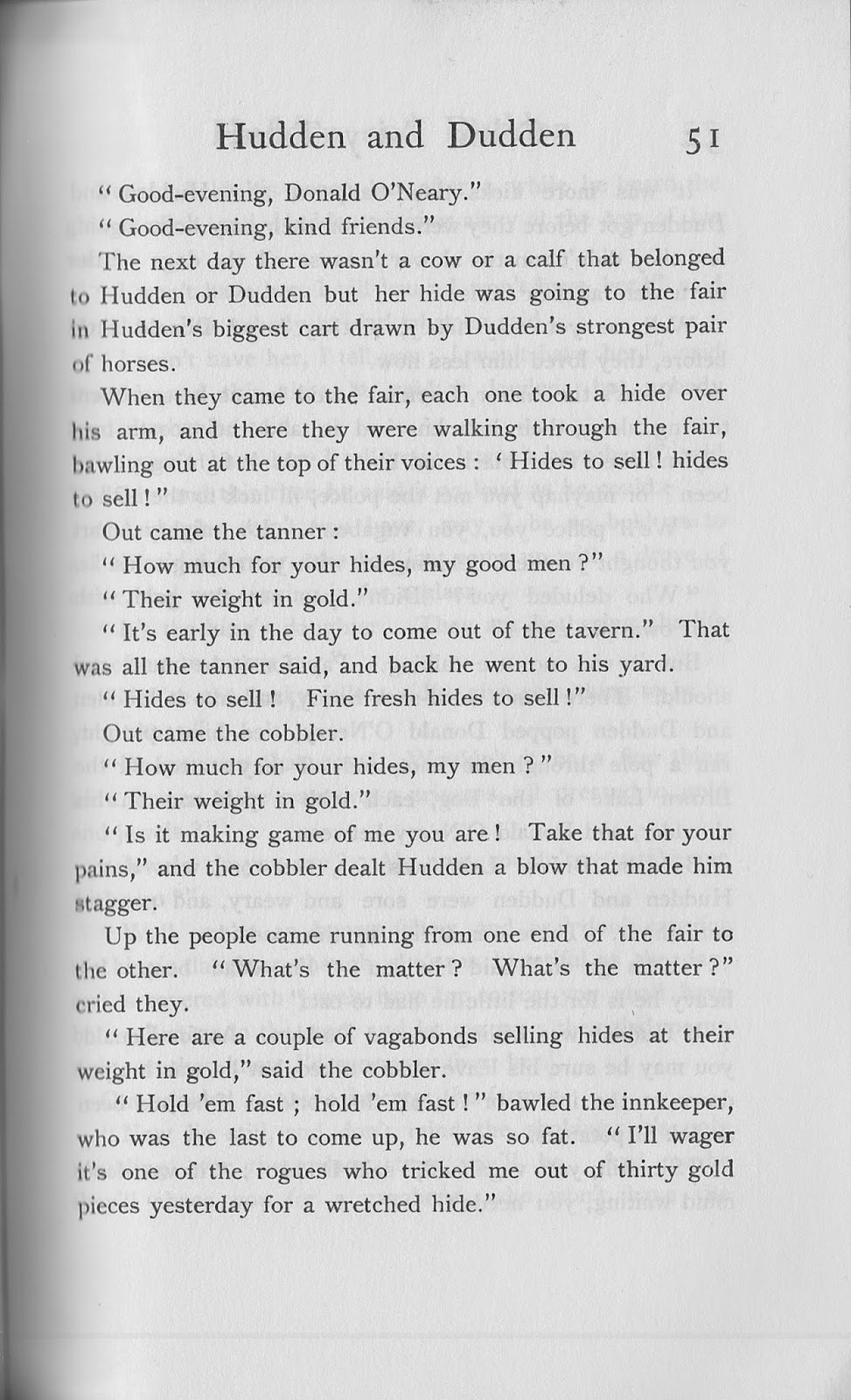 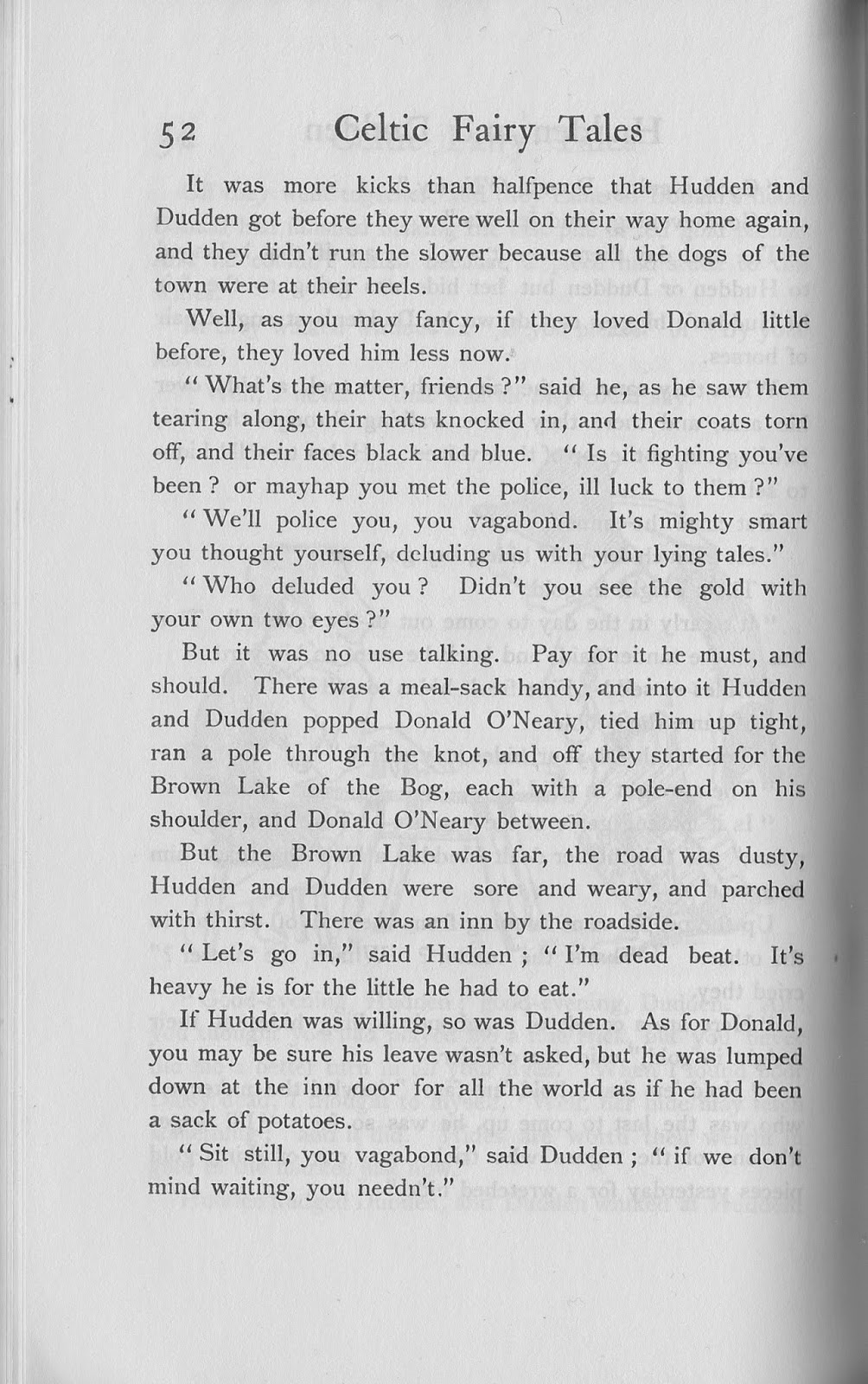 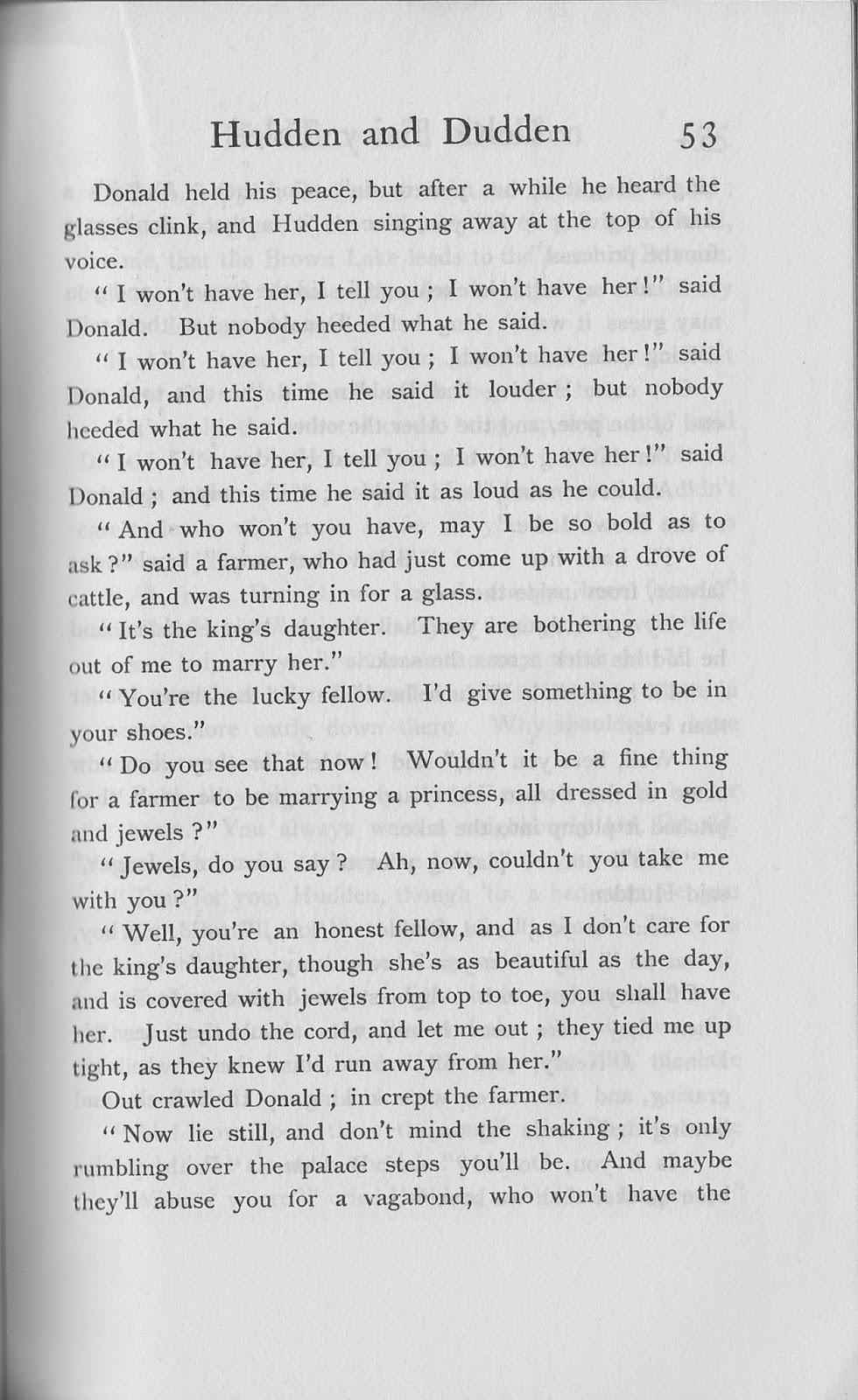 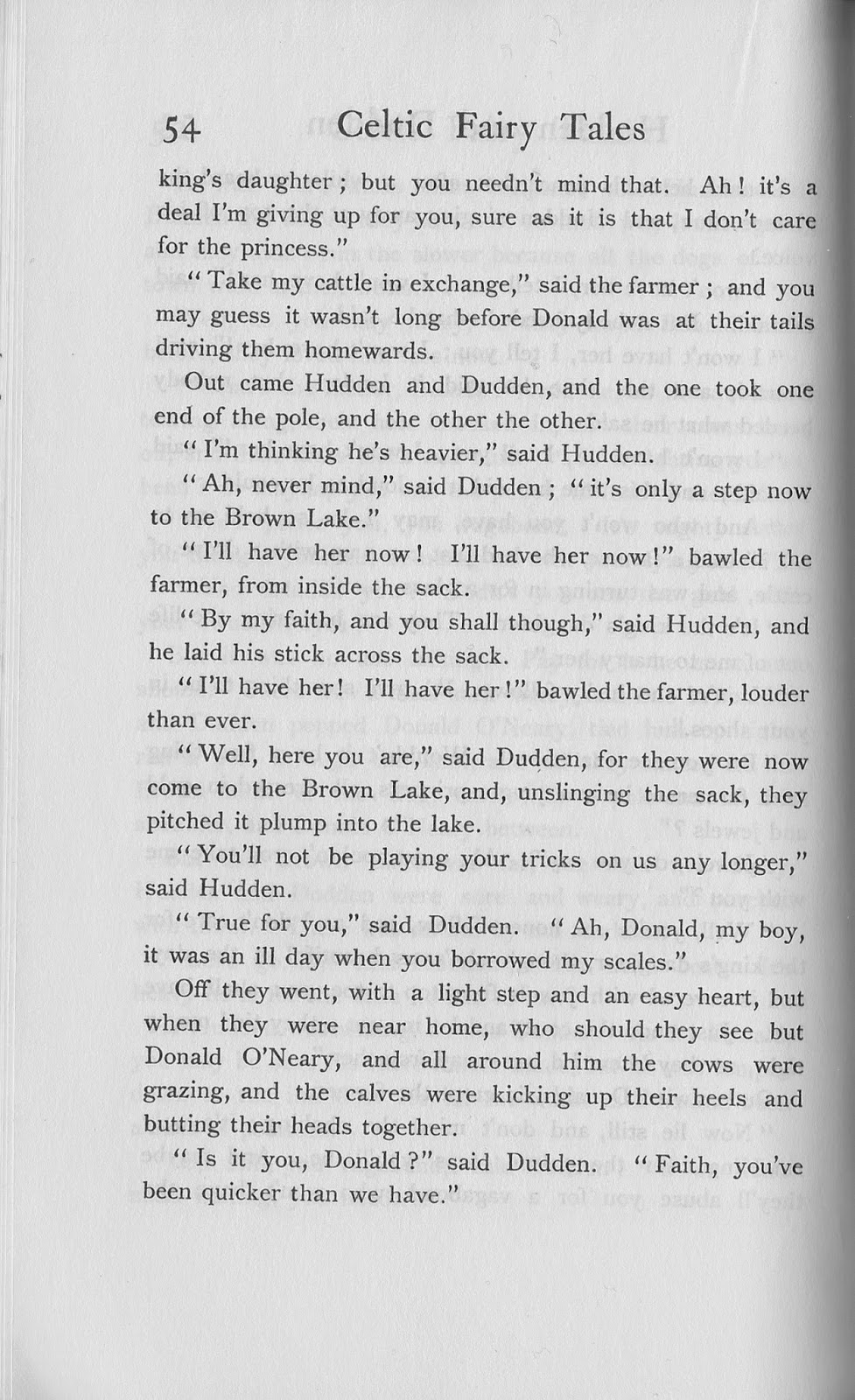 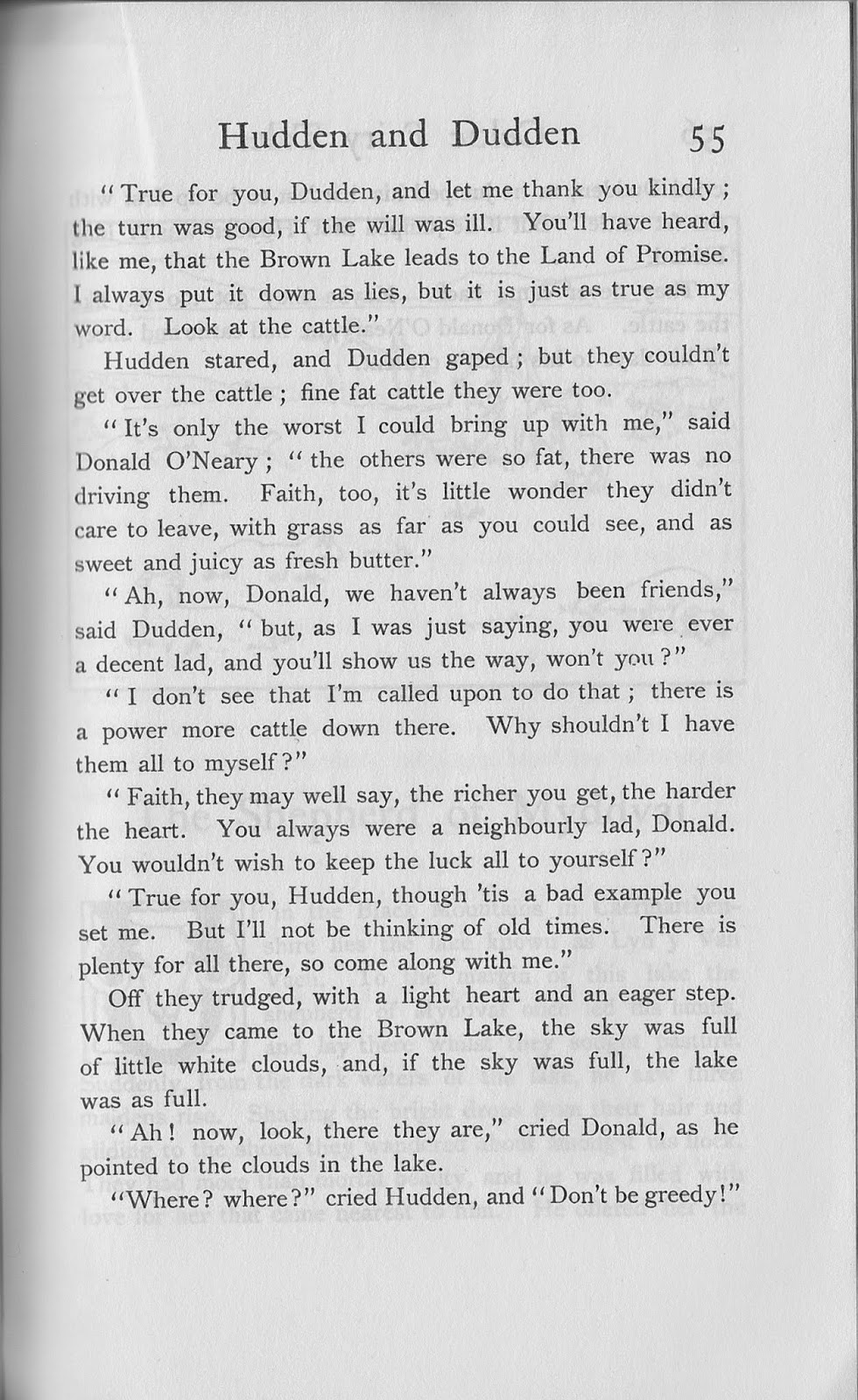 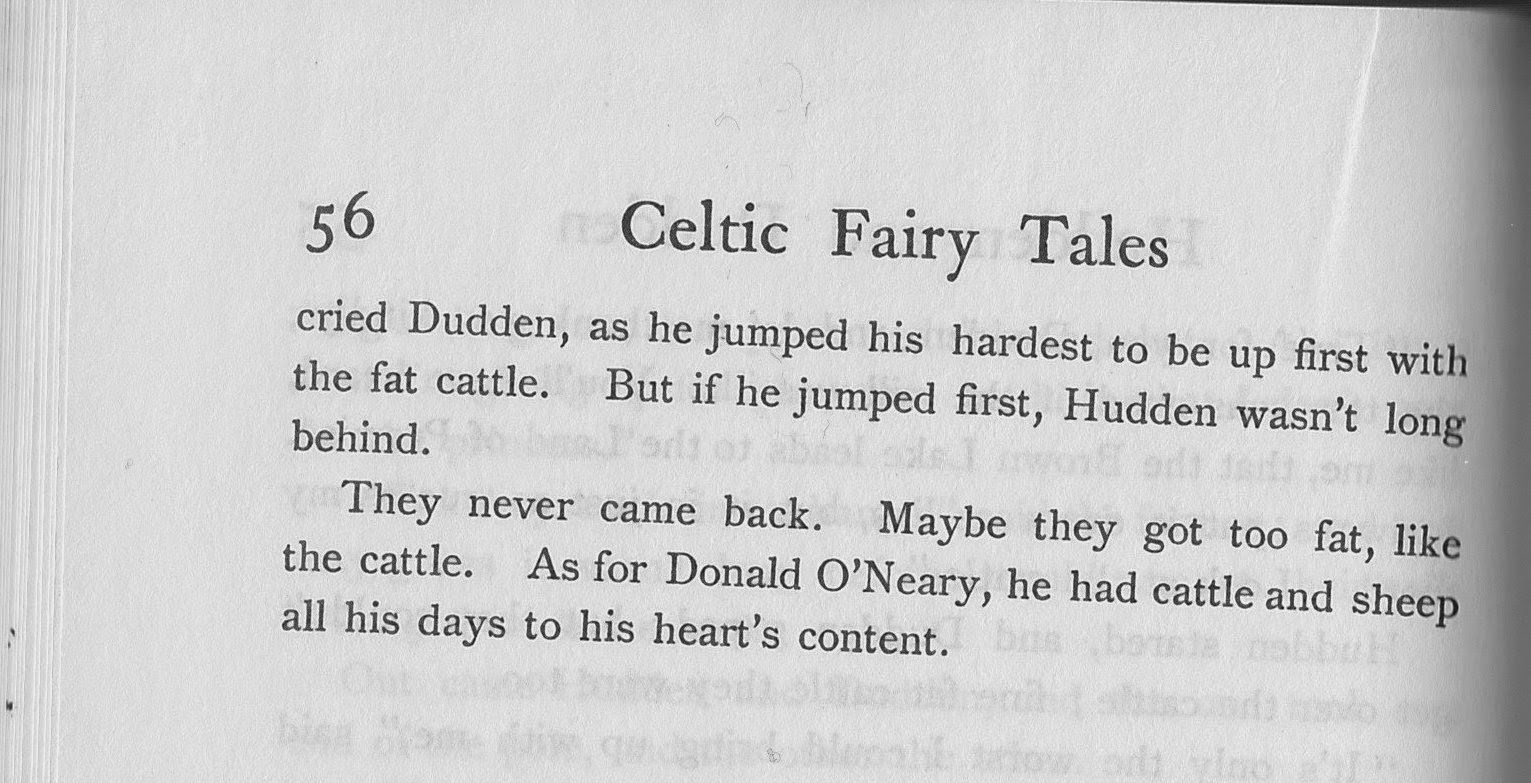 So what do you think about Donald?

My enjoyment would be there except for that farmer Donald tricked into taking his place in the bag.  Some would say the farmer was done in by his own greed, the same as Hudden and Dudden, but does that and also Donald staying alive only by his own wits make it right?

The story is considered a classic and many enjoy telling it, but that farmer spoils the story for me.

Is there a cultural explanation I'm missing?

Am I making too much of this?

UPDATE
Comments are always welcome here, but I use the Blogger platform, so you have to click Comments at the end of a posting to see those comments.  DRAT!  Sorry it's not more obvious.  Please be sure, especially on this one to see what might be said.  Discussion has begun, but unfortunately only if you go through the Blogger way of doing it.  Hey, this is free and without ads, so "you get what you pay for."  (Well, actually I buy the domain name annually, but it's a fairly good way to share storytelling in so many ways.)

*****************
This is part of a series of postings of stories under the category, "Keeping the Public in Public Domain."  The idea behind Public Domain was to preserve our cultural heritage after the authors and their immediate heirs were compensated.  I feel strongly current copyright law delays this intent on works of the 20th century.  My own library of folklore includes so many books within the Public Domain I decided to share stories from them.  I hope you enjoy discovering new stories.

A couple of points. We (especially storytellers) are being trained to be sensitive towards stereotyping. Yet are folktales are populated with archetypes, the mother of stereotype. Little wonder your gut tightens. While I am all for adapting a tale to maintain cultural relevance, we can do our listeners a disservice in the attempt to be inoffensive. Part of the function of the folktale is to support the exploration of deviant behaviors, without the fear of actual consequence. None of this, of course, excuses us from knowing the needs of our audience. No simple answer. Just more to consider. Pax & Amicitia. Papa Joe

For me, the names are the key pointer. I have not told the tale for over a decade. But when I did, I always introduced it as tale reflecting the forcible expropriation of much of the land by successive English colonising settlement. As names, Hudden and Dudden could not be more English, whereas O'Neary is as Irish as you can get. Against that background, Donald has long been the victim and his trickery is an act of independence against all the colonial elite, including the other farmer and the landlord.

I'd hesitate to tell this in schools for fear that the teacher would ruin it afterwards with a lecture about Donal tricking the inoffensive though greedy innkeeper and farmer. The innkeeper paid for the hide, and the farmer gave his herd in exchange for the sack, so Donal was a thief and a murderer. Killing Hudden and Dudden could be justified as self-defense: they'd find a way to kill him eventually if he just escaped from the sack.

Now, I'm new to this, being from a thetre background, and I have thesame feelings as you. Richard M's point gave me a thought or two though:

I'd introduce the other farmer' as another character earlier in the story, possibly as a constable who refuses to help Donald when he finds Daisy was killed by the two Englishmen, who then reels out of the pub drunk off duty. I'd also let him escape after being dumped in the lake.