Doesn't a trip to the Caribbean sound great in the midst of North America stuck in winter?  Maybe that's why the current news about negotiations between Cuba and the United States holds special attraction, even if the idea holds many problems.  At the same time measles is in the news and has a surprising connection.  I own Florence Jackson Stoddard's As Old as the Moon.  Its subtitle convinced me to buy it: Cuban Legends: Folklore of the Antillas.  It didn't hurt that the book was published in 1909. But the book has problems as old as the clash between Spaniards and the indigenous populations of the area.  This includes measles as one of many diseases that helped wipe out a population even Columbus described favorably:


They traded with us and gave us everything they had, with good will...they took great delight in pleasing us..They are very gentle and without knowledge of what is evil; nor do they murder or steal...Your highness may believe that in all the world there can be no better people...They love their neighbours as themselves, and they have the sweetest talk in the world, and are gentle and always laughing.

(quoted by Sale Kirkpatrick in The Conquest of Paradise on p. 100.)

There's a problem this hints at, but perhaps you want to hop into the warmth of the story dating back to the Great Flood first. 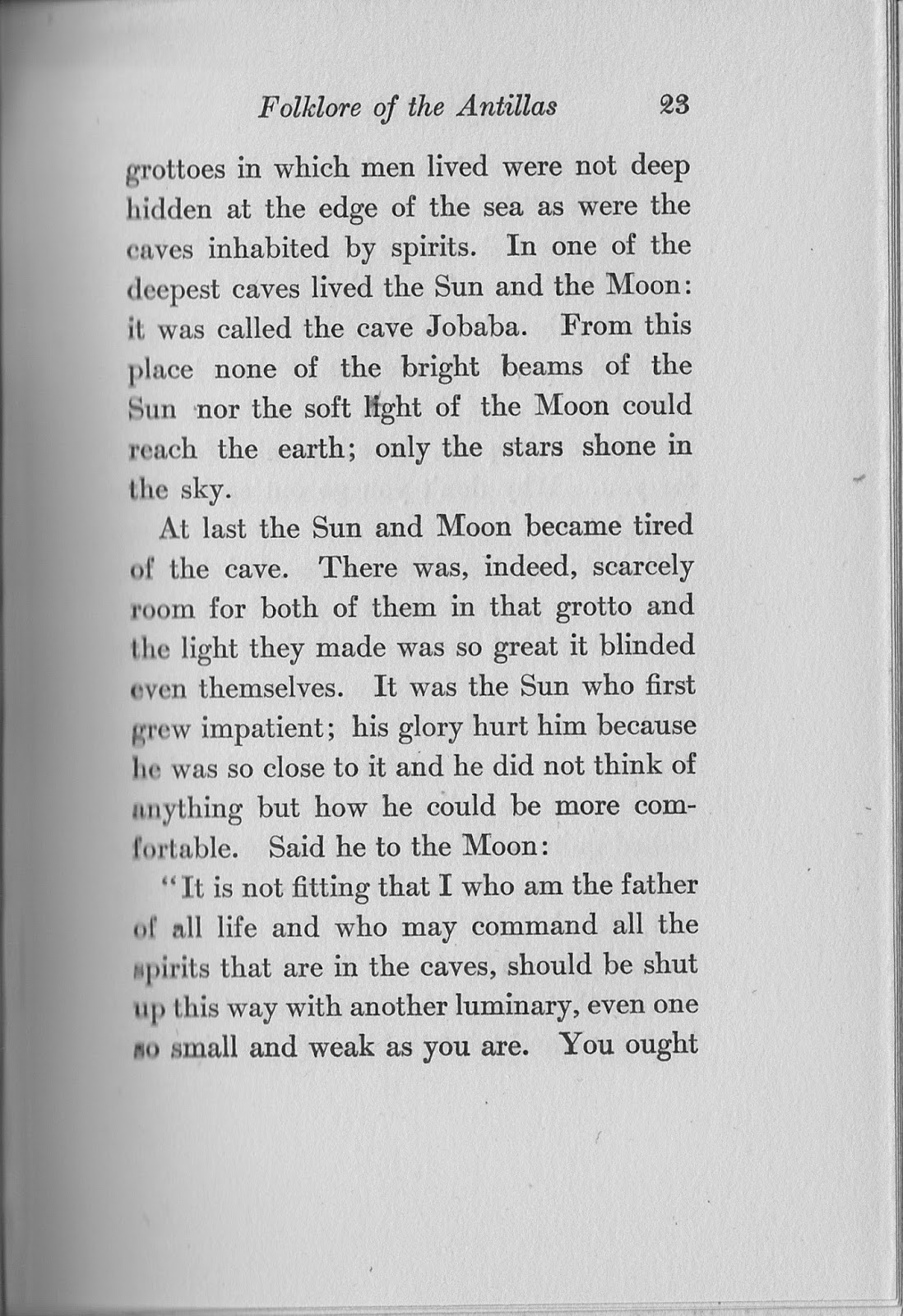 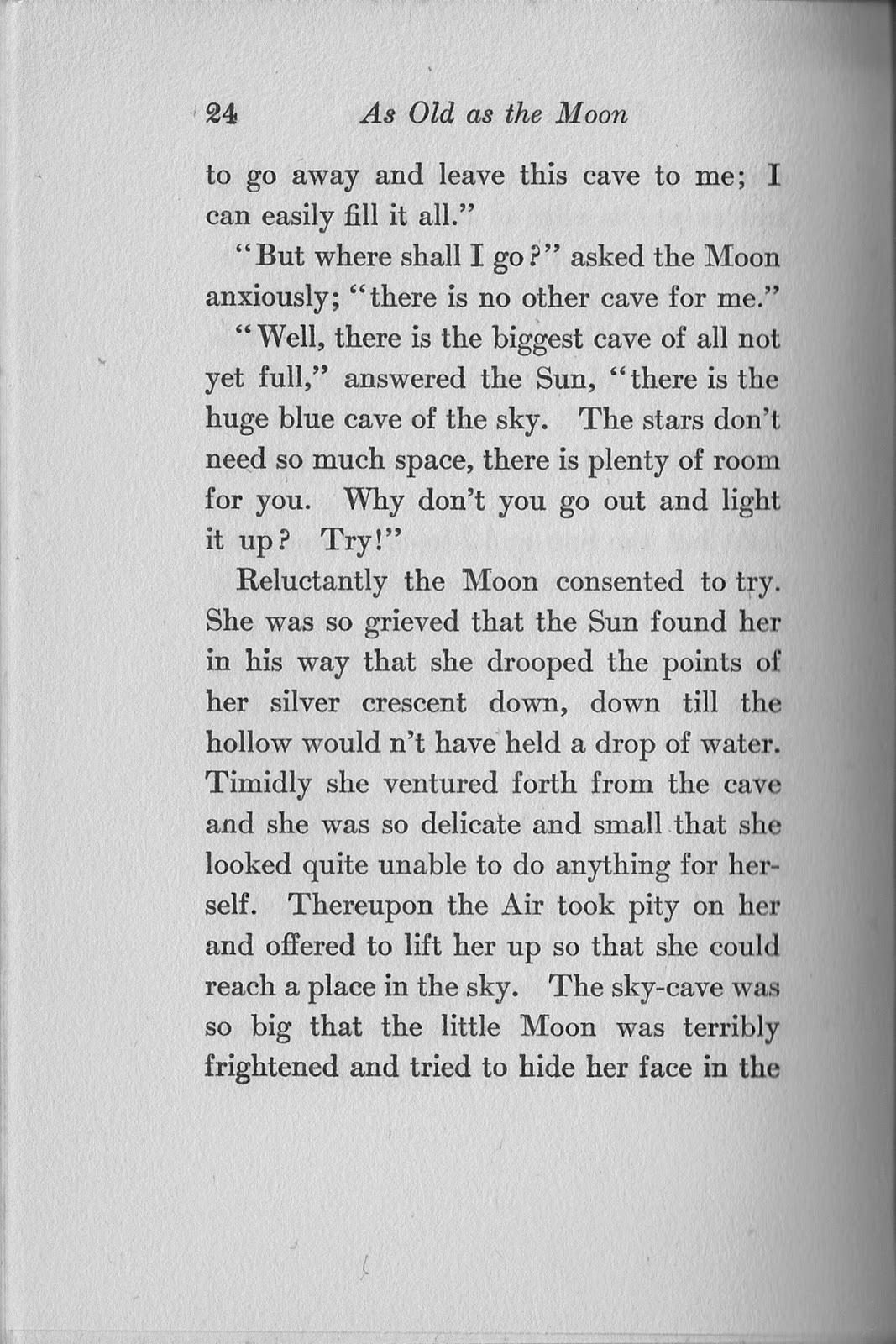 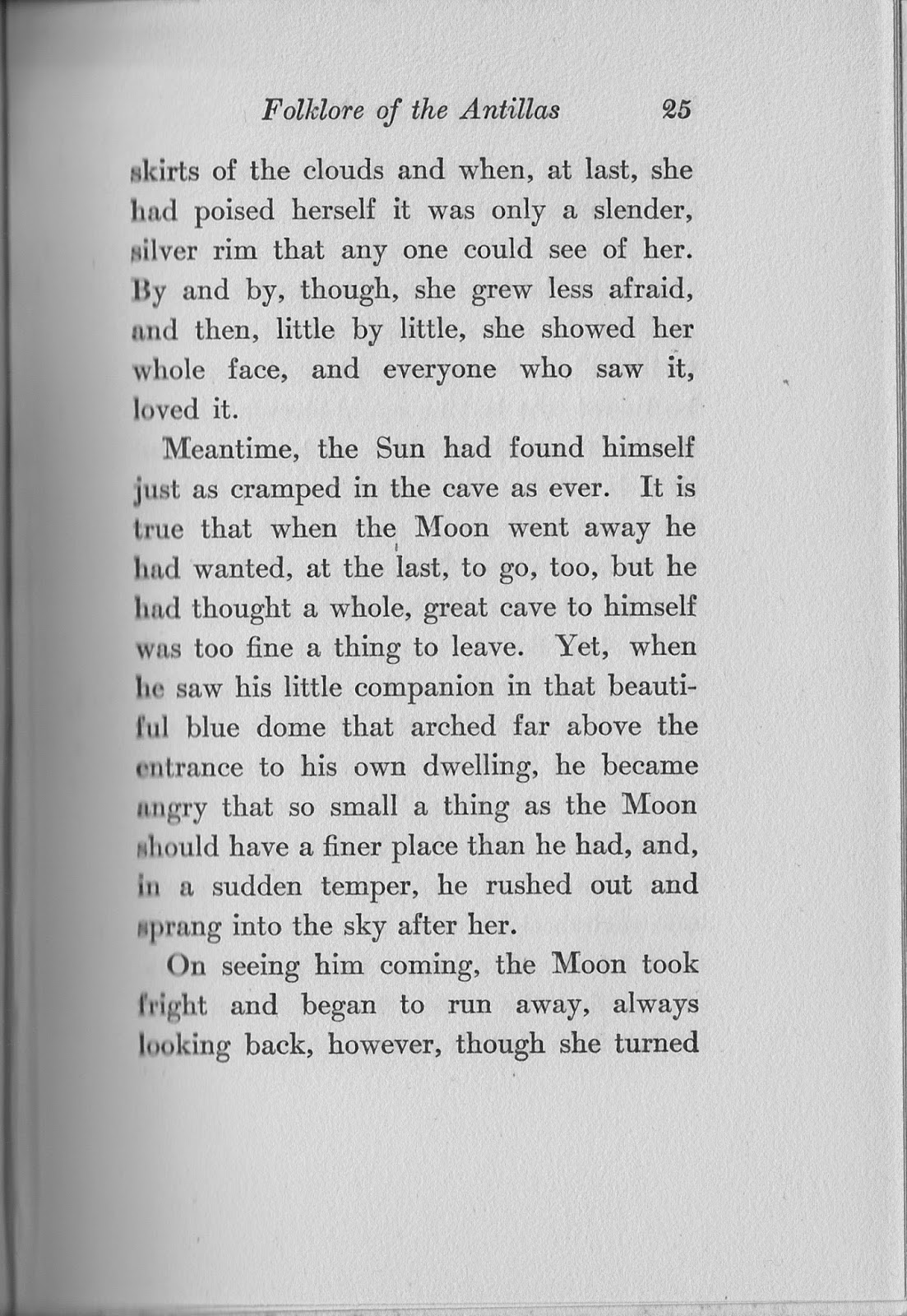 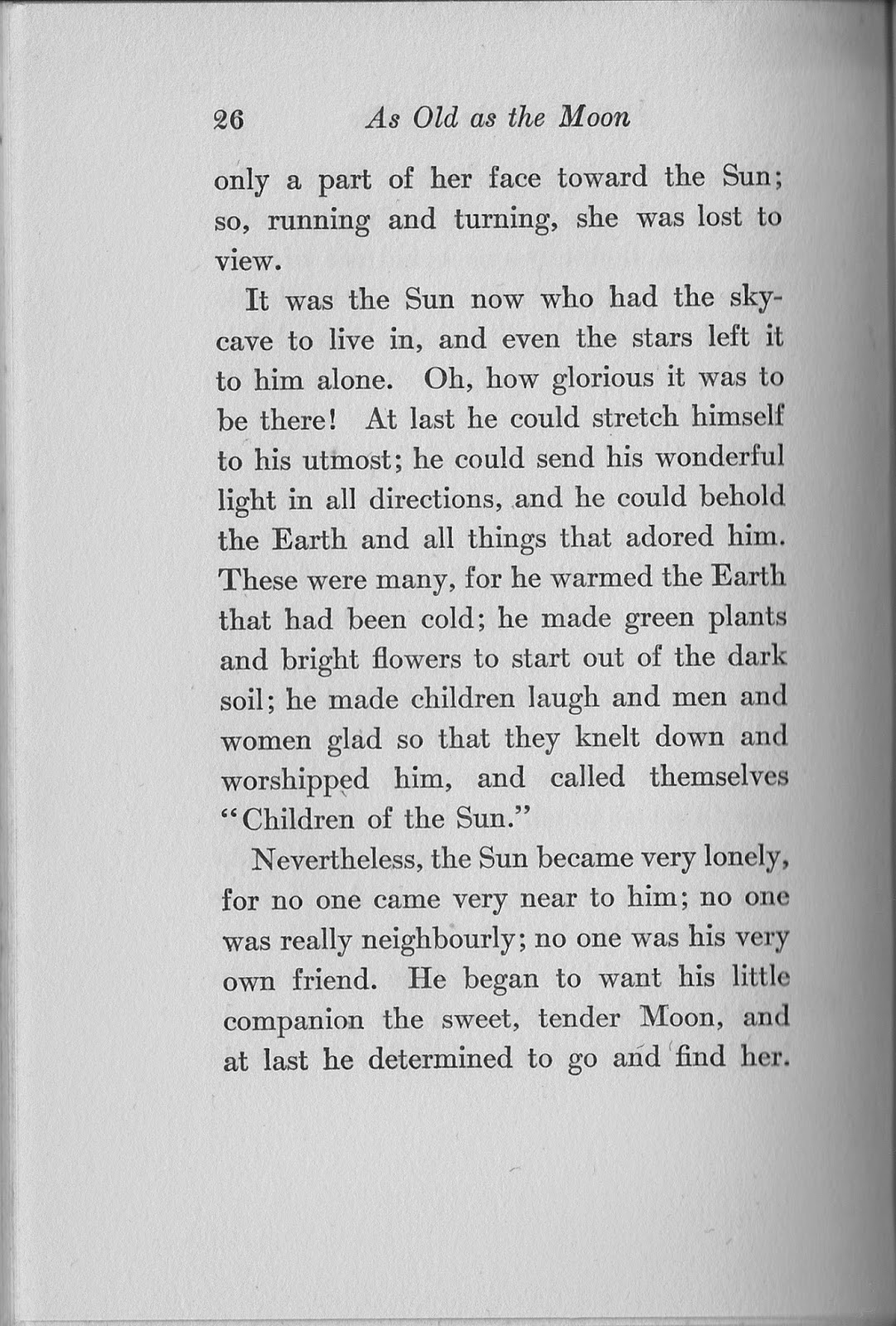 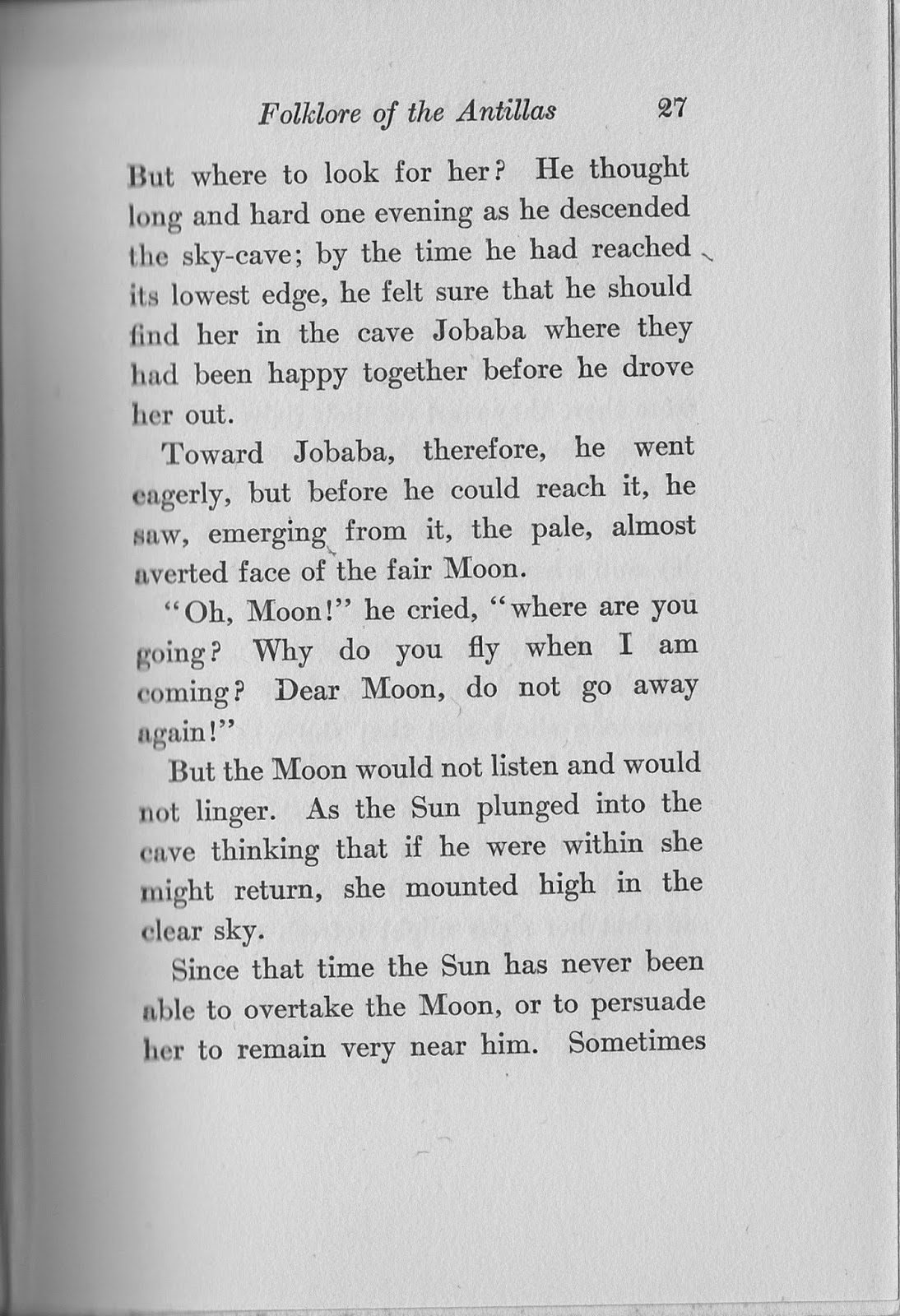 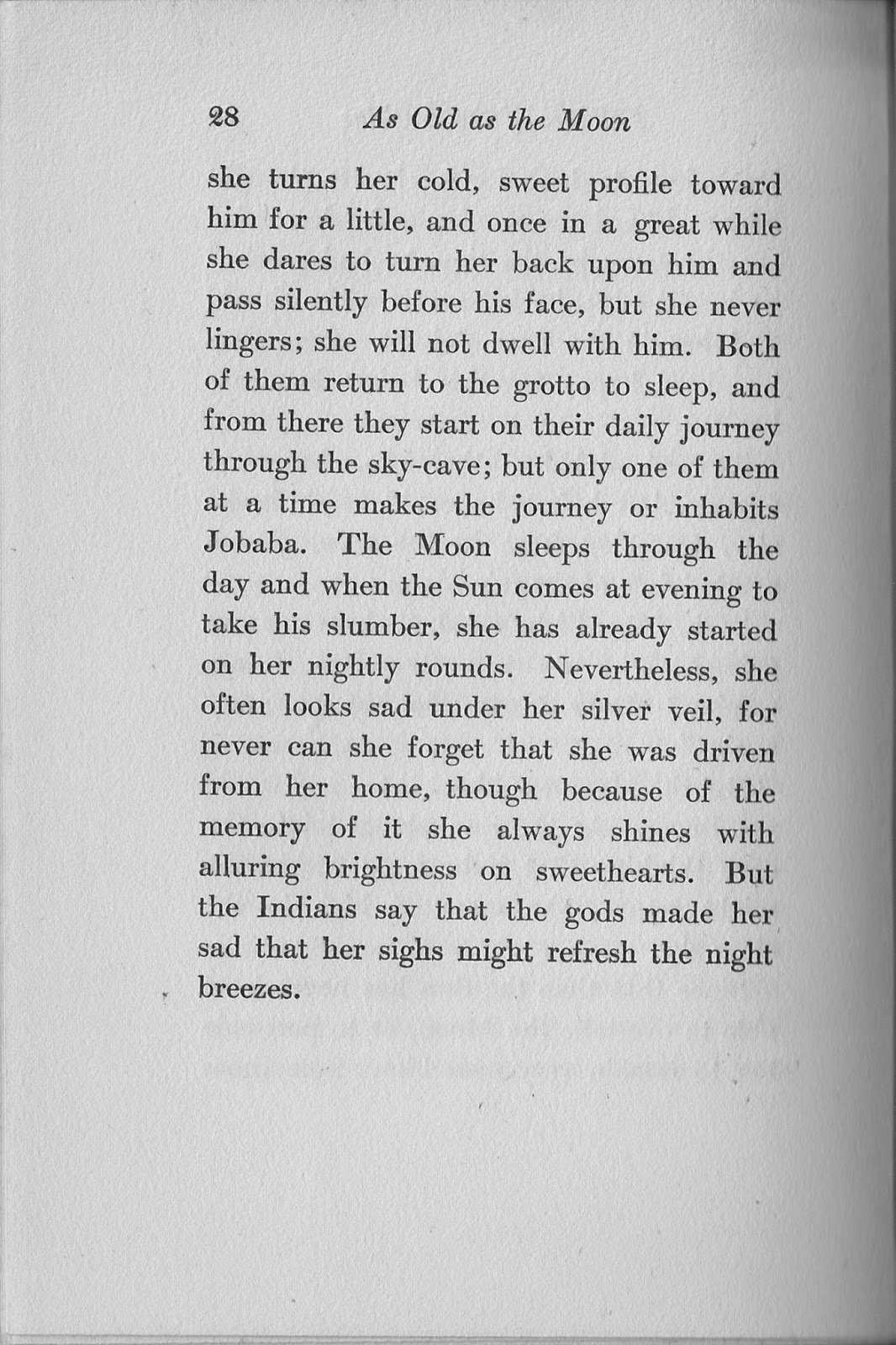 I love to tell nature Pourquois tales about how things came to be, including astronomical stories about the sun and moon.  This story is followed by the book's title story, "Old as the Moon."  I prefer this story and will think about it with the current full moon, especially since the weather usually gets worse in the waning moon.

Travel the Caribbean region (wishful thinking in the depths of this winter) and you mainly will find stories newer than Stoddard presented.  I love the Dominican Republic and the wonderful people there, so I've asked especially there, but like Stoddard, the oldest stories come from only fragments by the original inhabitants.  Dominicans have a great fragment talking about the people whose feet were on backwards to lead pursuers astray.

The best known of those native people were the Taino and, as usual, it's worth a quick read at Wikipedia to start knowing more.  Additionally Taino Symbology can be seen and the same gallery offers additional history for the people whose name means "Good and Noble."   A Smithsonian article and Caribbean blog, Repeating Islands, say recent DNA studies, starting with one in Puerto Rico in 2003 showed  that while Spanish weapons, enslavement, and especially disease reduced their numbers by 95% and extinction was widely believed, such things as intermarriage with the Spanish retained mixed DNA from the matrilineal line along with a surprising amount of cultural tradition.  The "Taino People were the predominant inhabitants of what are now Cuba, Hispaniola (Dominican Republic and Haiti), Puerto Rico and the Virgin Islands.  Some of the Arawak-speaking tribes of Florida could also have been related to the Taino." The danger is using, as Stoddard did, such fragments and thinking this qualifies as actual folklore.  Unfortunately this is the closest I've come, so far, to anything safely Public Domain for that region.  I'm uncertain about the copyright coverage of some of Harold Courlander's Haitian collections (a Library of Congress search seems to show some original copyrights were never renewed), but I would never present them in print as his name became known beyond the world of folklore for successfully suing Alex Hailey for copyright infringement when writing Roots.

While doing a bit of research on Courlander, I learned he made what doctoral candidate Daniya Dawe called an "eclectic definition of folklore as a treasury of social values and literary creations out of human experience (if not residue)."  Stoddard groups her stories chronologically by pre-Conquest, the Conquest Period (15th - 16th century), and Slave Myths of the Spanish Period (16th - 19th century).  My concern is with that subtitle, "Cuban Legends: Folklore of the Antillas." Is it folklore or her skillful embarking on crafting stories from the barest of fragments like those tales about the feet that faced backwards?

I'm not sure we can say such feet are part of human experience (possibly the wish to evade pursuers qualifies?), but more probably it fits Courlander's "treasury of social values and literary creations" from his A Treasury of African Folklore which Dawe says: extends beyond the 'verbal art' or 'oral literature' to include other cultural categories.

Wish I had some warm sand to take my own footprints right now.  Instead I must turn to Michigan's Anishinaabe explanation from Nanabashoo that without our winter's snow our trees, bushes and other plants would die.  From the snows of Petoskey, Odawa elder, Simon Otto, shared that explanation in his book, Grandmother Moon Speaks, and as he concludes all his stories: Walk in Peace.
*************************
This is part of a series of postings of stories under the category, "Keeping the Public in Public Domain."  The idea behind Public Domain was to preserve our cultural heritage after the authors and their immediate heirs were compensated.  I feel strongly current copyright law delays this intent on works of the 20th century.  My own library of folklore includes so many books within the Public Domain I decided to share stories from them.  I hope you enjoy discovering new stories.

What an interesting post, a country whose stories I've never heard before.