Michigan arguably has had some of the best summer weather in the U.S. this year.  The last week of July was the closest we came to hot weather.  It reminded me of the so-called "Dog Days of Summer."
The name Sirius is more than just a radio service as the Dog Days are tied to Sirius, once thought to be the brightest star in the sky.  We now know it's a star system of two or even a hidden third star within the constellation of Orion.  (Here in metro Detroit the accent falls on the initial "O" for the town of Lake Orion, unlike the mythical figure with the accent on the "ri", which seems a bit wry in a punny way.)

That mention of Sirius, the Dog Star, brings us to the story of Orion, his master.  The basics of that story are nicely told by Mara L. Pratt in her 1892 book The Storyland of Stars.  If you have an interest in stories related to the constellations or about such astronomical topics as shooting stars or comets, don't let the 1892 copyright scare you off some delightful material. 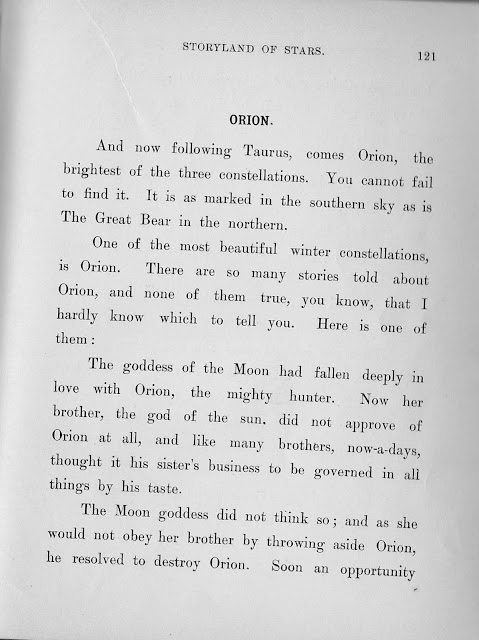 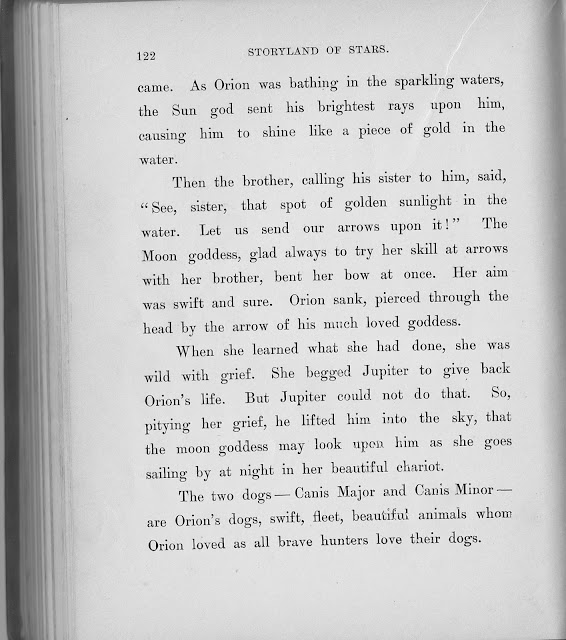 I really wanted you to see Pratt's story first, but as Pratt herself says, "There are so many stories told about Orion."  However I'd add that she does the most interesting job of telling about him.  She also avoids the Greek names and even uses the Roman Jupiter instead of Greek Zeus.  A modern publisher called Sirius Publications gives the name of that moon goddess and a bit of earlier story about Orion that reveals his character in ways Pratt's children's book audience wasn't ready to hear.  (If you're reading the story to your children, stop here unless they're about middle school age.)
Their Prequel tells us:
Orion was madly in love with the daughter of King Oenopion of Chios, Metrope, but was never allowed to marry her. One day, while drunk, he did something horrible to Metrope, and her father asked Dionysis to curse him. Dionysis put him into a coma and then blinded him. When he awoke, he went to an Oracle, who told him he would get his sight back if he traveled east and let the rays of the sun strike his eyes. Orion did so, and after regaining his sight he moved to Crete. In Crete, the goddess of the moon, Artemis, fell in love with him, and was too distracted to remember to light up the sky with moonlight.

That boy was made for the modern day media, wasn't he?

I greatly enjoy the storytelling of Barbara McBride-Smith and one of her specialties is bringing Greek myths alive as if they were a bunch of Good Ol' Boys in Texas.  It reminds me of when I still worked at Mount Clemens Public Library.  Annually the middle schoolers would come in talking about mythology as if it was the latest soap opera.  Jean Fargo, I never sat in your classroom,  but it must have approached the level of Barbara McBride-Smith, who combines her professional storytelling with her "day job" as a school librarian.  If you can't enroll in Mrs. Fargo's class, I recommend two of McBride-Smith's award winning CDs, It's Not Easy Being a Goddess and Good Old Boys And The Women Who Love Them.  The latter includes Eve and Mrs. Noah as well as Greek myths.

Wikipedia's article on Sirius can tell you way more than you probably want to know about the brightest star in the sky which is actually a binary star system and has been influential with those Dog Days internationally throughout history.  I find a company called Sirius, a group of technological freelancers, covers the scientific basics and history of Sirius in a more interesting way.  (Just wish they hadn't treated us all as if we were viewing the page on a mobile phone when formatting it.)

Here's the 2015 astronomical look at Orion the Hunter and Sirius the Dog Star from EarthSky, the daily astronomical newsletter.  As they point out, "Every year in late August, look for Orion the Hunter and Sirius the Dog in the early morning sky! Orion’s three prominent Belt stars always point to Sirius."  Here's also a short video of Weather Wisdom: The Dog Days of Summer from The Old Farmer's Almanac which mentions on their current homepage that this month will have the best meteors in years, so maybe I'll next bring Pratt's commentary on Shooting Stars.