Right now my focus has been on the insanity of filling a very big role, Abby, one of the two old aunts who "help elderly gentlemen find peace" by poisoning them.  For those who don't know either the classic comedy as a movie or play, it's a fun show BUT I made the mistake of accepting the role thinking it was a featured, not a leading role.

Why have I returned to occasional acting as time permits?  I've never had a good memory, in fact long ago I switched to directing to avoid it.  I love that storytelling is like a snowflake with each program being an interaction between storyteller and the audience.

Once a teacher who enjoyed my work introduced me as having "memorized all these wonderful stories" -- I corrected her and said they weren't memorized, I know them "by heart."

Memory is tricky and will let you down when you least expect it.  Just ask my fellow actors.

So why do it?  Because the brain, including memory, is a muscle that needs exercise.  (And this has been a real workout.)  To keep sharp, I keep telling myself, challenge yourself.  At the same time I know there are stories I either avoid or find ways to work around more than I can trust myself to memorize.  I remember a complaint by a storytelling mentor about how many storytellers told

it's a delightful tale (still in copyright), but he felt it was being told constantly.  There was no fear of me telling it because the story includes several long challenging jump rope rhymes.  In one storytelling anthology, A Storyteller's Choice, it is labeled "For the experienced storyteller."  I know I am, but don't trust myself on the memorization.

Today's story is in the same category, but I've found ways to have all the many gifts in the story in writing near me so I can concentrate on the story.  It's a great tale for the holidays, including Thanksgiving and Christmas, but isn't about either.  It's from Andrew Lang's 19th century series of rainbow colored folk tale anthologies and there is titled the  "Story of Wali Dad the Simple-Hearted."  I have the Dover edition shown here, a serviceable paperback that probably can't survive lots of scanning.  Similarly some books in my personal collection were library books that had a rebinding making it hard to open them fully for copying because of the process.  The works of Andrew Lang are all over the internet and I recommend one of my favorite sources, Project Gutenberg, and hope you, too, support them.  In this case it's extra important because they list 128 of his 249 books and there are many more worth discovering.  (My favorite nearly unknown book is his Prince Prigio, a comic novel about a prince cursed by a fairy to be "too clever.")  If you read a bit about Lang, there's the usual Wikipedia article,  or you can catch the article in "The Scotsman" about Andrew Lang: the life and times of a prolific talent", or the brief biography at Literature Network, all show his work goes far beyond the beloved rainbow series.  It takes another Wikipedia article, however, Andrew Lang's Fairy Books, to show the series went against the critical opinion of the time (1889-1910) which held fairy tales were too brutal and unreal for children and unworthy of an adult's serious consideration.  Because of his collecting the tales, the 1890s and early 20th century saw a flourishing interest in folklore. 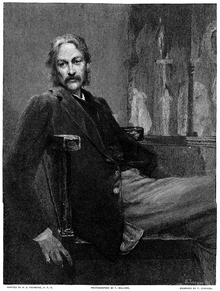 Unlike the typical 19th century anonymity of a woman's contribution, Andrew Lang acknowledged his wife, Leonora's assistance.  I own a little of her work and see even more worth reading at Project Gutenberg and so there's even more hidden gems for storytelling.


For an index to the many stories in the Rainbow series, go to Flying Chipmunk Publishing.

There are a multitude of online Lang texts, but they omit the illustrations by H.J. Ford.  Many are at SurLaLune Fairy Tales, often wearable, but unfortunately not the one for today's story.  I'll scan it and let it follow today's story. 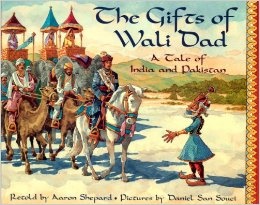 Today's story and all I wanted to say about the Langs has gone quite long, but I first met the story through my friend Aaron Shepard, who produced not only a delightful book, but his website gives many extras such as a Reader's Theater version, posters, and insight into what went into his book.  Another worthwhile picture book was also made by Kristina Rodanas and she calls it The Story of Wali Dad, so it makes a great story to tell, then show the two picture books, and the Ford illustration to compare and contrast and get reactions.

Truly we have many gifts in this story that supposedly came to Lang from a Major Campbell stationed in the Punjab.
************
This is part of a series of postings of stories under the category, "Keeping the Public in Public Domain."  The idea behind Public Domain was to preserve our cultural heritage after the authors and their immediate heirs were compensated.  I feel strongly current copyright law delays this intent on works of the 20th century.  My own library of folklore includes so many books within the Public Domain I decided to share stories from them.  I hope you enjoy discovering new stories.