This weekend is the tenth anniversary of a date most people just think of as 911, the same as the North American emergency phone number.

I'll be telling at a memorial service and wanted to share one of the stories I find particularly useful when the subject is death.  There are various versions with some having major changes, but the most frequently published version is here.  (It let me find a copy that reproduced well.)  Coyote is a trickster character who often manages to seem like the cartoon character in his foolishness.  We miss something if that's all we see.  His role in Native American folklore, whether foolish or even by other viewpoints downright immoral, still often manages to create good or, as in this case, set standards by which the world lives.  Another name for those standards is a "pourquois" tale because it explains "why" something came to be the way it is.  Like many tricksters, he also is often a great example of "what not to do."  Today he's in the position of setting in motion the way the world lives . . . and dies.

The most commonly presented version was collected by a Bureau of Indian Affairs doctor, George Benson Kuykendall, back in the 19th century when "ethnology" led many to collect Native American folklore.  Today some would say this is yet another way white Europeans took what wasn't theirs.  Trickster that he is, I bet Coyote laughs at that.  This story comes from Fort Simcoe on the Yakima Indian Reservation in the Northwestern area where yet another trickster, Raven, is said to have spilled out a deluge of languages upon the first people there.  Many of those languages have gone extinct and others are working to preserve any remaining languages and culture.  Yes, much of that would still be around if there hadn't been efforts by many to eliminate it in the Indian Schools.  Not everyone wanted to do that and it's why I believe we should respect the ethnologists and thank them at least for saving what they did.  Kuykendall didn't write the story, merely record it, but I believe it fairly fits public domain by virtue of when he collected it.  I'm not a lawyer, haven't even played one onstage yet, but hope this is acceptable to reproduce as it certainly matches the aims of Public Domain (see my standard closing below for whenever I reproduce something in my "Keeping the Public in Public Domain" segments).

Coyote and Eagle in the Land of the Dead

(often listed as being Yakima because of where it was collected, but the Wishram people are probably its source) 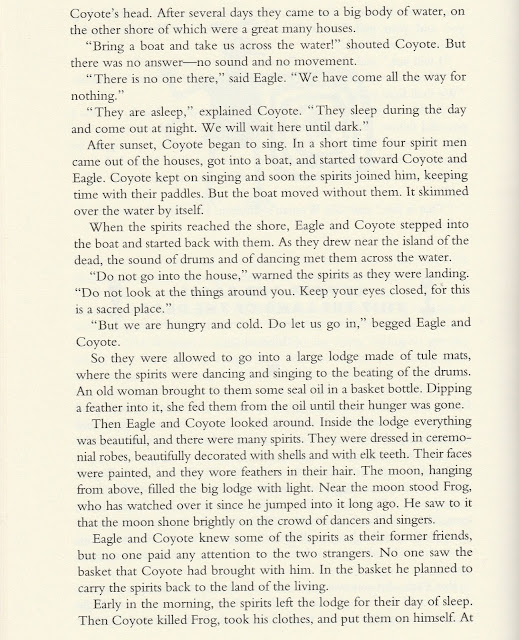 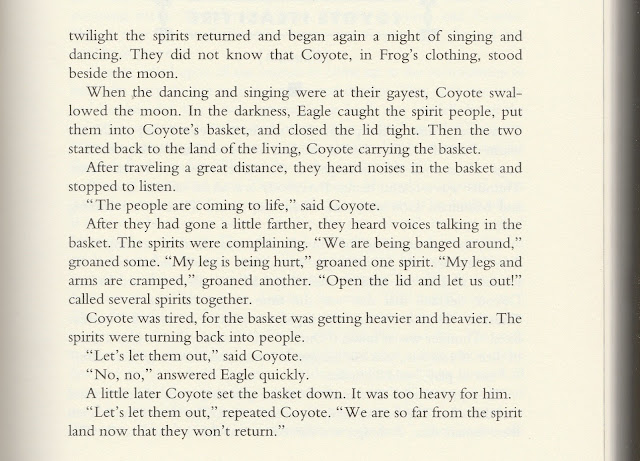 On this sad anniversary many would probably wish otherwise, but the lesson most often gained from this story is that our bodies have their limits and this is how death releases us from pain.  It's hard for those who remain behind, which brings up yet another tale that the living stand on the shore while our loved ones get into the boat across to the Land of the Dead.  We stand and wave goodbye, while over there those who have already gone there are waving in greeting.
********
Here's my new closing for days when I have a story in Keeping the Public in Public Domain.
*****************