Space. . . the final frontier
and fifty years ago! on September 8 in 1966 appeared the first Star Trek episode with six t.v. series and 13 films - including this past summer's Star Trek Beyond (debuted 7/22/2016).  Don't have much science fiction material nor storytelling opportunities, but can't overlook a cultural phenomenon like this. 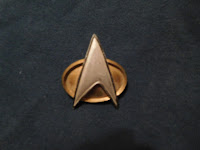 I know they've been super-inclined to make people take down any offiffiffic'al graphics, but I should be able at least to show my own pins. 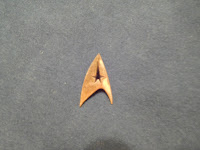 There have been five Captains:

(Was Trek Talks the sixth series?)

Resistance is futile . . .
There will be more than one touring exhibit, from the science/technology end of the spectrum all the way to the arts with one called Star Trek: 50 Artists 50 Years and a book by the same name.  There will even be a cruise out of Miami, but presumably it's only sailing on the ocean.  Tons of books are coming out, novels, even a teen graphic novel series called Star Trek Academy the publishers hope will be a "Star Trek Hogwarts", as well as miscellaneous nonfiction, including more trivia than Tribbles, even a Star Trek Mad Libs, plus more serious reference books, as well as enough retrospective items brought back to fulfill for their creators the Vulcan wish to "Live long and prosper." (Now where did I put that book that was supposed to teach me Klingon?)  There have been many reference books over the years with Harper Collins revising and enlarging to two volumes its Star Trek Encyclopedia (originally published in 1999) again by the writers of many of those other reference books, Denise and Michael Okuda, a couple who occasionally wrote for both t.v. episodes and the movies. The most interesting combination of fiction and nonfiction comes from National Geographic and claims to be "where sci-fi and real science collide" with its Star Trek; The Official Guide to Our Universe -- The true science behind the Starship Voyages by Andrew Fazekas (& a Foreword by William Shatner) and promises to combine snapshots and scenes from episodes with facts on the solar system, exoplanets, stars, nebulae and more.

How I wish that included transporters!  Even though I suspect, since Star Trek did inspire some scientific and technological advances, initial efforts will be just as difficult as when Doctor McCoy used to worry about his molecules being scattered.  I know I remember reading somewhere that labs have indeed tried to create a way to transport objects (and lab animals?).  It may be filled with problems, but still as Captain Picard loved to say, "Make it so."
Posted by Lois Sprengnether Keel at 1:00 AM