Pyle - Apple of Contentment - Keeping the Public in Public Domain 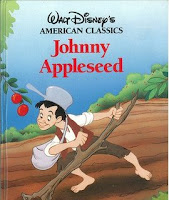 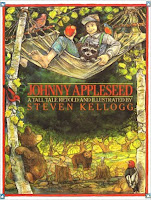 How perfect that "Johnny Appleseed" or John Chapman was born on September the 26th at the busiest time for cider mills and the core time for apple festivals!  You do know, I presume, that he wasn't the same as the folk hero of tall tale fame 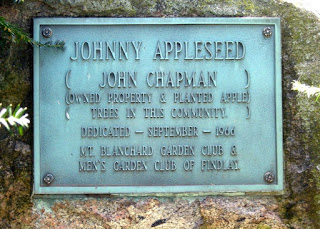 nor Disney's American Legends cartoon version.  Fort Wayne, Indiana lays claim to being where he died and celebrates him in many ways, but doesn't mark his grave.  A bit closer to me, Findlay, Ohio notes his work there.  I've never been able to locate any proof of his planting here just a bit north in Michigan.  I guess his influence was sufficient to create the plethora of orchards and cider mills.

As a result I have a real taste for telling apple stories.  For those wanting to separate Johnny Appleseed fact from fiction, there's the inevitable Wikipedia article, but you might also try 9 Facts That Tell the True Story of Johnny Appleseed (my browser said it was still trying to download the page, but it actually was downloaded), the supplemental 10 Things You Didn't Know About Johnny Appleseed, and Smithsonian's The Real Johnny Appleseed Brought Apples and Booze to the American Frontier.  I consider the last article best, if you will only read one.  In several of them you will discover Prohibition actually resulted in almost all of his trees being chopped down!  On a happier note, I was delighted to find the Disney film was accurate in its use of the Swedenborgian hymn you may recall singing: Oh the Lord is good to me and so I thank the Lord for giving me the things I need, the sun, the moon and the apple tree.

Last week I mentioned Howard Pyle in connection with his Book of Pirates, which was actually a collection of his various writings and illustrations about pirates.  None were short enough for here and today's story is long, but it's my favorite apple story.  It comes from Pepper and Salt; or Seasoning for Young Folks, which I recommend along with his The Wonder Clock; or Four and Twenty Marvelous Tales, Being One for Each Hour of the Day and the less easily found in stores and libraries, Twilight Land.  He did other books, but these three are wonderful anthologies of his own tale telling and deserve tasting again and again.  So don't just take a bite out of this story, it's worth gobbling it all up.  When you re-tell it, you barely need to digest it for today's listeners as it tells well even though long.

At times it seems as if the title should be the Apple of Discontentment, since it is reserved for Christine.  Similarly I have a bit of discontentment as my second page is only just legible with the binding tighter than I like.  After that I was able to push it down for better viewing, but even then you will notice a bit of a shadow. 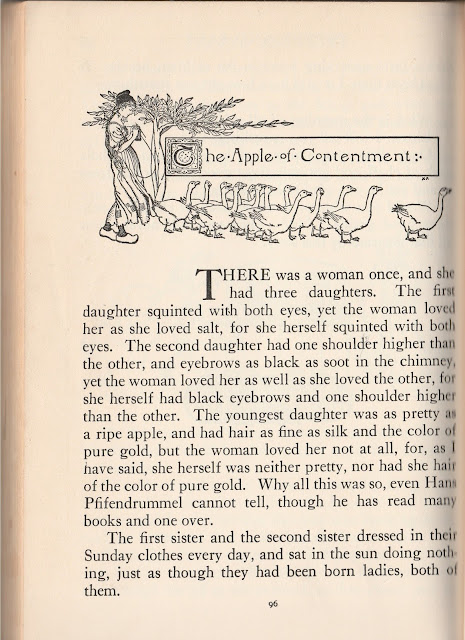 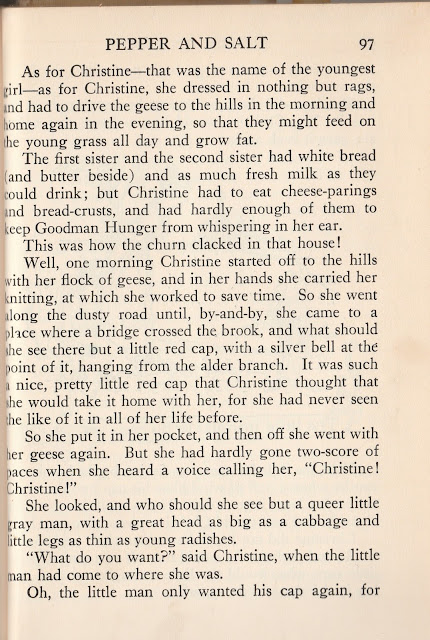 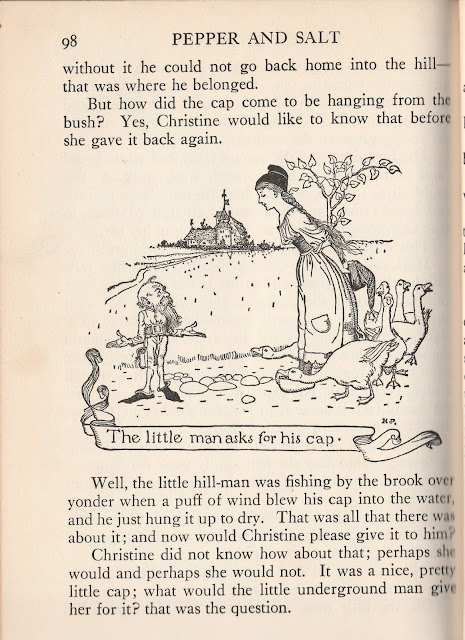 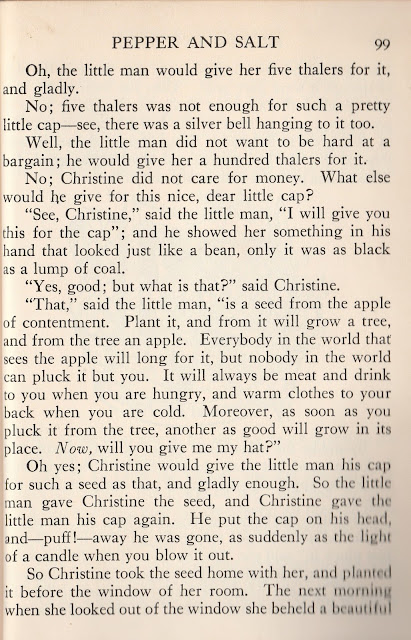 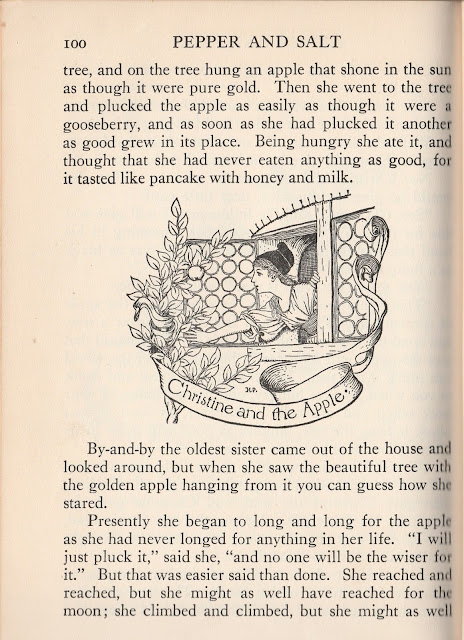 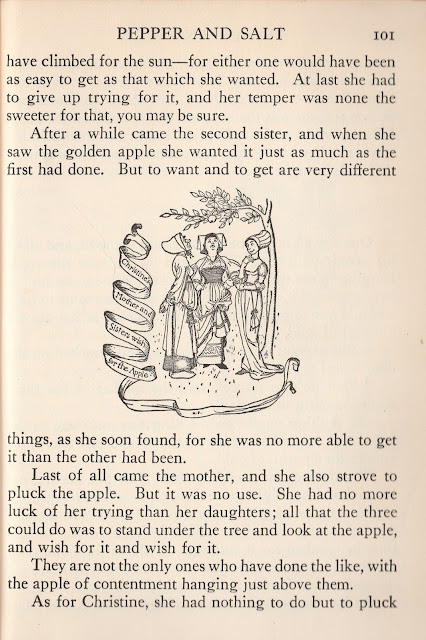 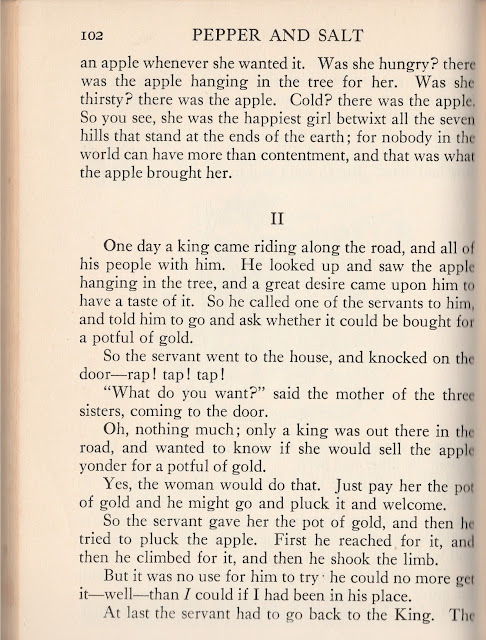 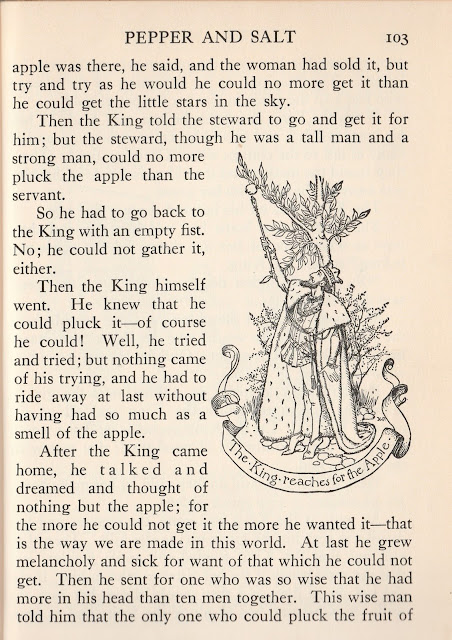 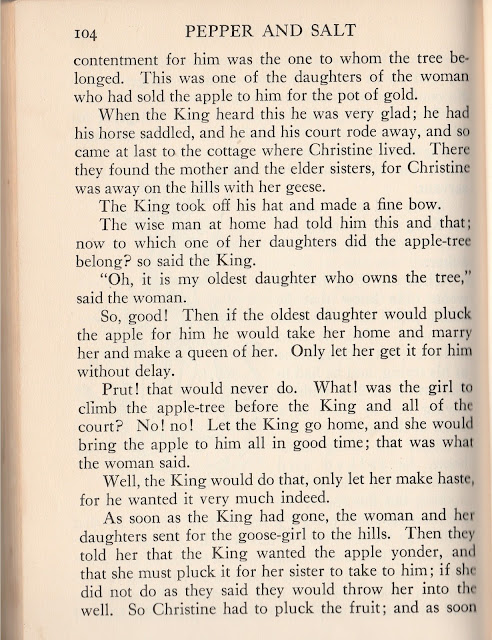 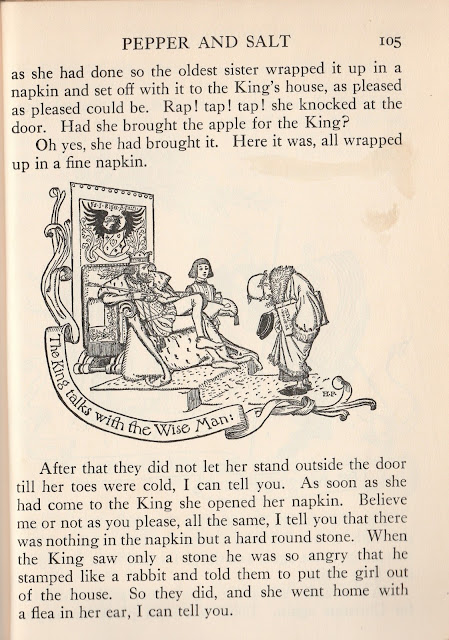 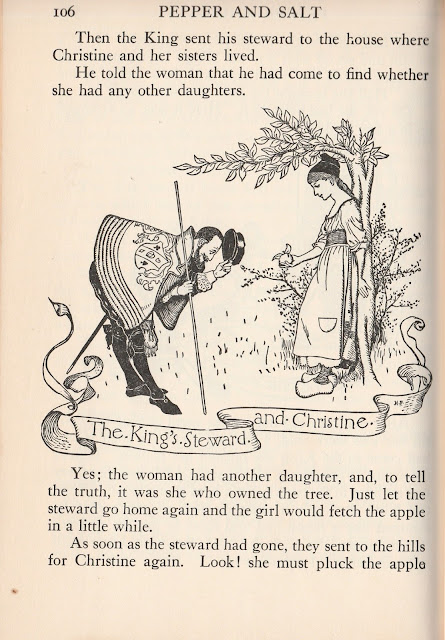 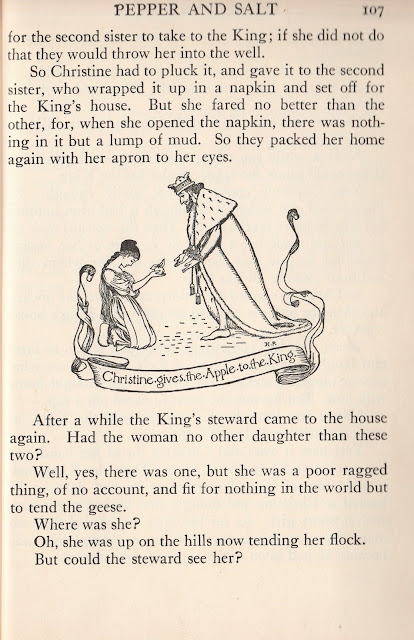 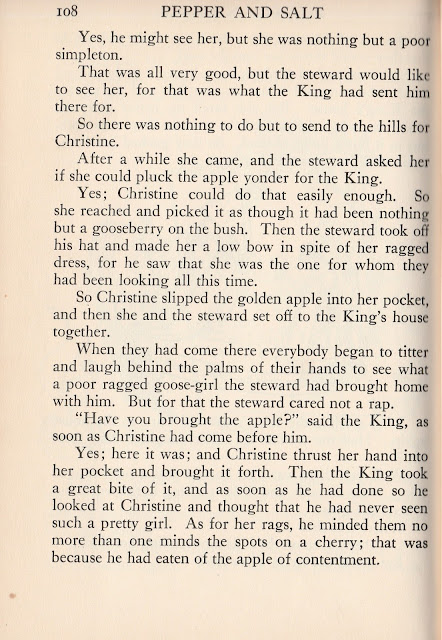 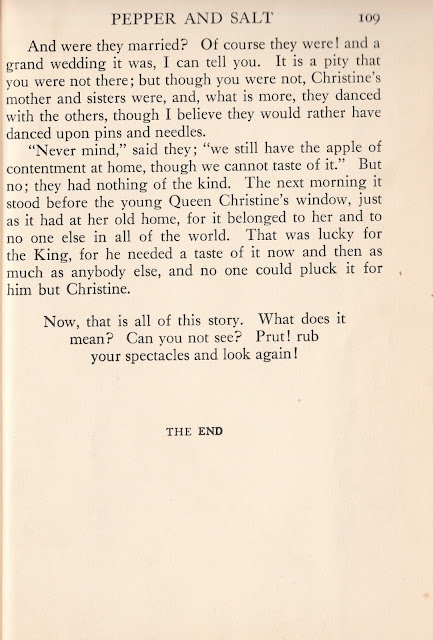 When I talked earlier about the possibility of renaming this the Apple of Discontentment, there are a few other thoughts occurring to me.  As I mentioned earlier this is a long story to tell.  When telling at an apple festival or cider mill where people are wanting to move about, shorter stories are easier.  Go to Jackie Baldwin's old site of ideas from fellow storytellers for Apple stories and folklore resources.

On a personal bit of discontentment, I had a twisted, dead tree tangled in with an apple tree cut down only to discover the apple tree had been using the other tree as a prop!  The apple tree started to tip and, before any additional support could be added, a strong wind storm finished the job.  Neighborhood deer were the only ones eating those apples as it was a roadside volunteer.  Often I've tossed the cores of my favorite apples, Ida Reds and Granny Smiths, out a car window or in my own fields hoping to be another "Johnny Appleseed."  I'm already planning how this tree will be replaced with Granny Smiths currently and then add Ida Reds when I can get them.  (By the way, I have a true story I love to tell about the real Granny Smith of Australia.)