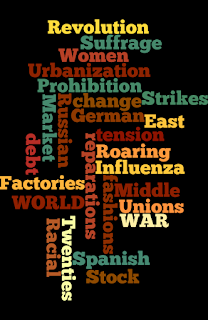 This coming week, on April 6, the centennial observation of the U.S. entering World War I begins.  War always changes thing, but this was a major change of more than the many lives lost or national boundaries changed -- although that was certainly major change on a global scale, including the Russian Revolution and creation of the individual countries forming the Middle East. 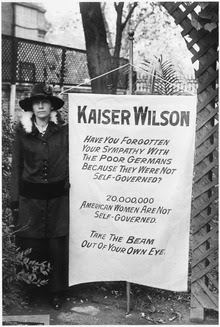 March is Women's History Month, but it could easily have been April because more than ever before women joined the work force, even serving the war effort abroad.  President Wilson dragged his feet on both entering the war and on giving women the vote, but he eventually had to support each: the war when submarines sank the passenger ship, Lusitania, and then American ships; the vote because of women participating in the war effort.  That recognition finally came with the 19th Amendment by 1920. Women suffragettes existed before the war and they weren't limited to the U.S., but a more liberal time opened in Europe and here, in the formerly rural America, people wondered musically about the change the soldiers brought back in the song "How Ya Gonna Keep 'Em Down on the Farm After They've Seen Pa-ree?"

Even gaining the vote didn't mean women remained a major part of the work force, but with fewer men, more women were now the family breadwinners even if they didn't gain equal pay.  Again World War II's "Rosie the Riveters" would add to the accumulation of working women, even though many went home for yet another decade before joining the chorus of "equal pay for equal work."

It might be considered trivial, but the war also shortened hair, raised hemlines and even brought women in trousers, abandoning previously common floor-length skirts.

Technology changed, with the rise of the Industrial Age shifting the population to places like here in the Detroit area where Henry Ford's auto plants moved us from local crafts to factories.  Those factories moved into high production to support the war.  The shortage of factory workers especially shifted the African American population from the rural south to the north. After the war all rural areas joined that migration increasing the nation's urbanization and racial tension. Whether cars, planes, movies, or radios, it's as if the pace of life suddenly sped up.  Some hoped to sober the country up with Prohibition only to set the stage for organized crime.  Machinery, 8 hour days, unionization coupled with strikes, and inflation all were part of the change.  Even the financing of the war with Liberty Bonds and Victory Bonds introduced people to investment until the bubble burst with the Stock Market Crash initiating the Great Depression.

Officially the war killed 10 to 13 million people, with almost a third being civilians -- primarily in Europe.   The wounded returning were probably at least twice that number.  Because the U.S. entered later and the war wasn't fought on U.S. soil, our numbers were less.  While the "Spanish" Influenza struck North America, too, the war conditions easily spread this killer of young adults.  Returning soldiers also seemed to carry back what was almost another disease: cynicism and disillusionment in addition to the wounds and trauma of war.


Because U.S. losses were less, this war never received the same level of attention of as World War II.  The U.S. economy soared into the Roaring Twenties, although inflation was a part of that.  The country became recognized as a world leader both militarily and industrially.  This contrasted with the U.S. participation in the "War to end all wars" and afterwards a general determination to avoid involvement in problems beyond its borders.  In contrast European economies were hit with massive debt, especially Germany, who had to pay the major share of reparations, and that created conditions leading to World War II.

I strongly recommend the U.S. World War I Centennial Commission website, including the Michigan section, and especially the video section there by Dennis Skupinski.  He's been an excellent resource and friend.

For now I'm busy telling the story of World War I from the viewpoint of the "Hello Girls" who needed to fight 60 years until they finally received official veteran's status, but even then granted only to the few women still alive. 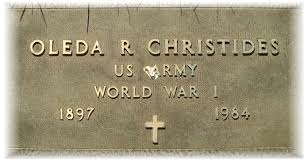 I believe strongly in the importance of history as seen by the "average" person.
Posted by Lois Sprengnether Keel at 4:33 PM