Cowles - Origin of the Violet - Keeping the Public in Public Domain

I call my dog my "cross trainer" as every other day, if at all possible, I try to take him out for a 45 minute to an hour hike, with some days double that if time and energy permits.  (He also becomes a "cross" trainer if he doesn't get enough exercise.)  It's a perfect time to observe nature and think about things like stories.

Hiking the hills and valleys of a nearby state park right now made me wonder what Pourquois story might exist about what I was seeing and even tasting.  Pourquois tales are stories about Why or How something came to be.  When I mention tasting, it's related to 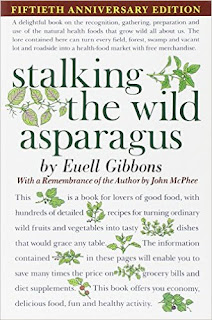 and enjoying the taste of wild plants like the leaves of wild violets which are sweeter than any lettuce.  No, I didn't have a bunch of them, just a leaf or two doesn't hurt those beautiful bits of scattered springtime color.  Euell Gibbons started Americans appreciating the edible bounty of nature without our even planting it.

Here's an Iroquois story to pay for that bite of springtime. 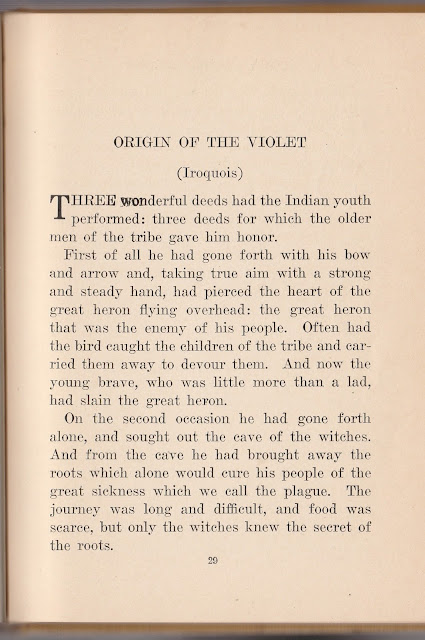 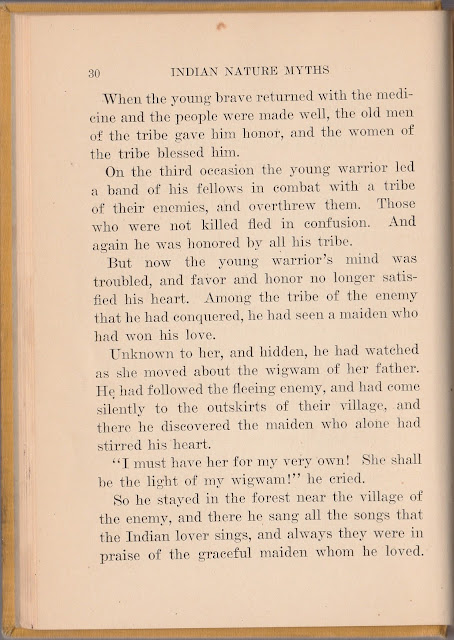 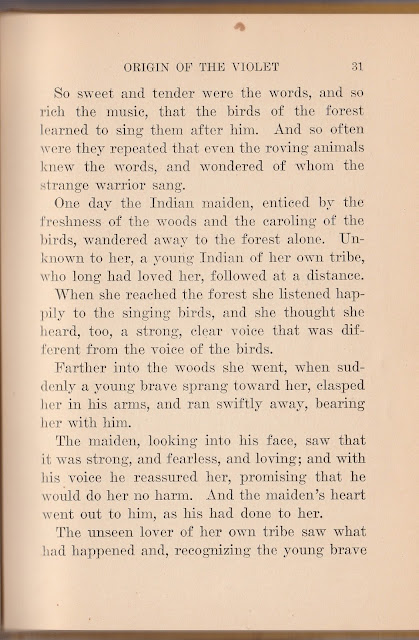 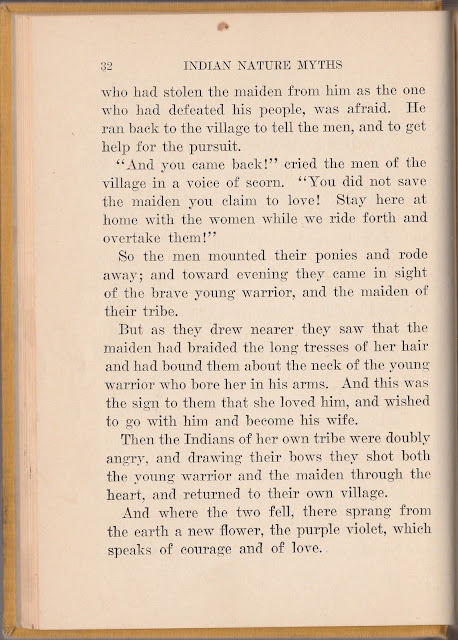 A sad end to a story that seems to just pop up out of nowhere even as the wild violet does along the trail.

Earlier on this blog I have what little information could be found about Julia Darrow Cowles,who gave no source for that Iroquois tale, but at least she identified it as coming from the Iroquois.  Many early editors of Native American anthologies from many of those nations didn't identify the tradition.  Her Indian Nature Myths at least gives us that much documentation.

The name itself of Iroquois some say came from the French, while others believe it came from their Algonquin enemies here in this Great Lakes area and means "rattlesnakes."  They call themselves the Haudenosaunee, meaning "people of the long house."  I only use it because it is the more common description for the confederation, but the hotlink on the logo and previous sentence take you to the official website of a people who can easily lay claim to being the oldest living participatory democracy on earth.  A Wikipedia article debates their contribution to the creation of the U.S. Constitution and Bill of Rights, but the U.S. Congress in 1988 passed a resolution recognizing the influence of the Iroquois League.

Similarly it was difficult to find the source where Julia Darrow Cowles found her tale.  I searched well-regarded Iroquois books pre-dating her title. Books I have and online come from the half-Seneca folklorist, Arthur C. Parker, also Harriet Maxwell Converse and Mabel Powers, each of whom were adopted were adopted into the Seneca nation within the Confederation.  Folklorist Jeremiah Curtin was another early recorder, again from the Seneca tradition.  The U.S. Bureau of American Ethnology publications from these individuals, when online are small type and not easily browsed when a title uses an Iroquois/Haudenosaunee word.  It's not in my own books by Parker, Converse, and Powers, and the only books I own by Curtin are his Irish collections, another area of folklore he loved.

I also checked Legends of the Longhouse by J.J. Cornplanter since an Iroquois Reprints of a 1938 book, but Cornplanter is apparently a popular Iroquois name.  Hathi Trust Digital Library has the 1902 Legends of the Iroquois told by "the Cornplanter" with "authoritative notes and studies by William W. Canfield" and it's there on page 81!  I think it does a better job of starting and ending the story.  Canfield described the Cornplanter as a Seneca chief, giving two transliterations of his name meaning the Cornplanter, who told the stories shortly after the American Revolution.  Canfield explains further about the authority of the stories and how he proceeded to document them.

The ending in Legends of the Longhouse says more about the two lovers and the girl's choice to leave her people, but closes with: From this spot sprang the violets; and the winds and birds carried the seeds of the little flowers over all the world, into all countries where men dare and maidens love, so that the Indians of all ages might know that the Great Spirit would always raise a monument to true love and bravery.

Powers, whose book, Stories the Iroquois Tell Their Children, available for free through both Project Gutenberg and Archive.orgArchive.org, tells not only about her sources, but how she became named Yeh Sen Noh Wehs or Daughter of the Senecas.  She is the only one specifically saying she collected from all the Iroquois.  She tells us a story was ended traditionally with "Na ho" meaning "It is the end" -- and for today it is.
*************
Here's my closing for days when I have a story in Keeping the Public in Public Domain.
*****************